The following is a guest post by Peter, my travel partner and husband.  Travel days aren’t always my favorite part of globe trotting.  Travel days consist of packing up, moving, early mornings, hours in airports and cars, but Peter is a fan so this post is well suited for him to write about and share our experience.  -Jaime

After a number of months on the road you realize that the majority of your time feels like you’re either packing or repacking, boarding or de-boarding, checking in or checking out, stamping in or stamping out and asking for WiFi passwords.  All the movement, logistics, itineraries and scenery changes can be so exhausting that by the time you actually reach your destination the last thing you want to do is explore the very place you were so excited to be arriving at in the first place.

So I consider myself fortunate to have a brain that is oddly wired to love the travel days as much as the destination itself. I’ve actually planned itineraries and trips that I’ve never had the intention to take. I read FlyerTalk.com Trip Reports in my free time where people outline their travels in such excruciatingly beautiful details, the more minutiae the better. When we lived near LAX, I would watch the international planes land and day-dream about the countries the planes were arriving from.

In short, I can’t get enough of traveling in the most literal sense and the journeys they provide.

So when I was tasked with getting us from Victoria Falls in Zambia to the Chobe National Park in Botswana, I couldn’t have been more excited.

The real treat of this route was traveling to the “Four Corners” of Southern Africa a quadripoint where you can cross a splinter of the Zambezi River and be in the middle of four African countries at the same time: Botswana, Zambia, Zimbabwe and the Caprivi Strip of Namibia.  I’m a visual learner so put together this map to illustrate our route and the various country’s geographies.

Fun Fact: The Caprivi Strip was negotiated during German colonial times of Namibia to give the West coast country access to the Zambezi River which flows to the East coast of Africa. The Germans gave up their interest in Zanzibar as part of the deal. 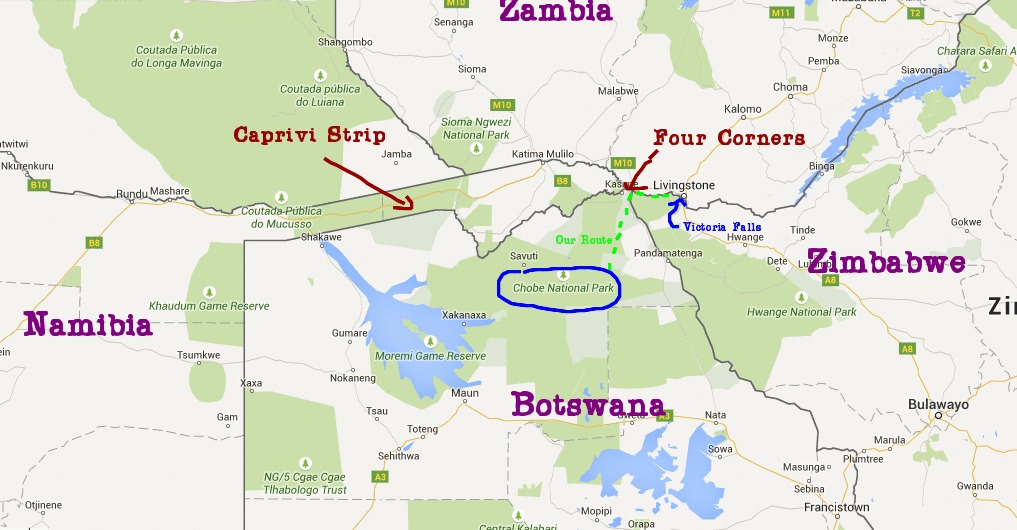 I found a company that specializes in overland transfer from Zambia/Zimbabwe to Botswana called Wild Horizons.

Our driver with Wild Horizons picked us up promptly at 8am at the Royal Livingstone Hotel in Zambia in a modern mini-van with cold bottles of water in the coasters. It was 55 miles of very slow, surface street driving as we headed West along the Zambezi River until we reached the crossing point of the Four Corners, Kazungula Ferry Crossing.

As we approached the Ferry Crossing of Kazungula (which is real fun word to say, try it) we passed miles and miles of semi-trucks lined up and parked alongside the road. As we got closer to the river we passed huge parking lots of more semi trucks just parked and empty. We were instantly curious.

Our driver explained that the Kazungula Ferry is one of the largest crossings in Africa and that the wait time to cross in one of the two pontoon ferries in operation is up to two weeks. Each pontoon (pictured below) can carry 1 or 2 semi trucks at a time, or 70 tons of weight, and it takes 15 minutes to cross the 1/4 mile crossing. Its a painfully slow process of transport that is in operation 24/7. 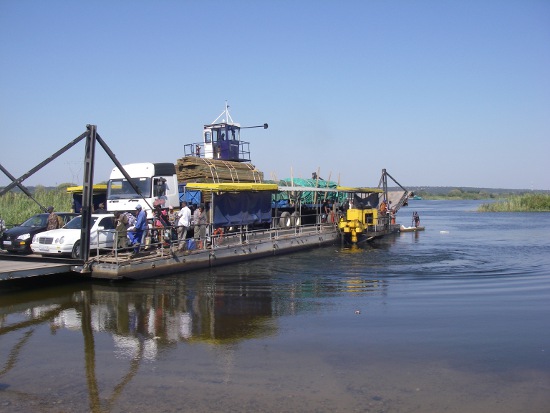 Some of these trucks are carrying cargo all the way from East African countries such as Kenya and Uganda, attempting to reach the rest of the Southern African states via the Kazungula Ferry Crossing. Its the only crossing point between Zambia and Botswana. As a result, the city of Kazungula is a bit of a madhouse with thousands of truckers waiting for their crossing turn for the two week period and having some fun while they’re at it. There are makeshift guest-houses made from sheet-metal, wood and tarps scattered around the ferry port city and we crossed a number of bars, restaurants and what looked like dark, scary brothels in the African trucker city.

There were plans to build a bridge in 2007, but our driver just shrugged his shoulders when we inquired about the progress and said, “This is Africa!”

Thankfully for us, we didn’t have to wait two weeks in Kazungula. Our driver took us to a small immigration office where we stamped out of Zambia and then showed us to the shore where a small speed boat owned by Wild Horizons was awaiting to take us across to Botswana and through the quadripoint. 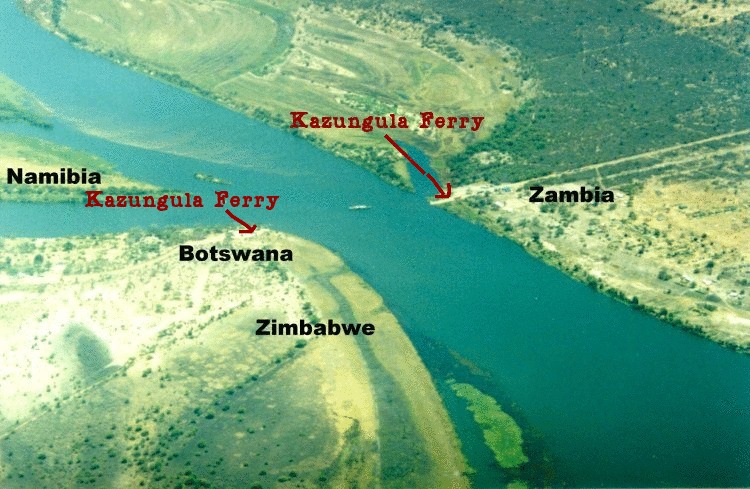 After a short five minutes of traveler excitement of being unstamped into any country while staring off into Zambia, Zimbabwe, Namibia and Botswana, we were met on the Botswana side by another Wild Horizon driver that would take us to the Chobe National Park, our destination.

Procedures at Botswana immigration were simple and we were stamped into the country in a few minutes (country count: 64). But as we walked back to the truck an immigration guard yelled out in our direction, a situation you never want to happen. Oddly though, he was pointing to what looked like a dirty puddle. We were confused. Our driver quickly intercepted the situation and told us we had to step in the puddle. With confused looks we asked for clarification.  For “foot and mouth disease prevention,” the driver explained.

After stepping into the dirty puddle with our shoes on we climbed into the van and headed 30 minutes through the city of Kasane and into the Chobe National Park where we would stay and safari for the next 5 nights.

It was a flawless transfer by Wild Horizons that was created for most to be as unmemorable and efficient as possible. For me, it was yet another highlight of an amazing trip-of-a-lifetime of Africa and I savored every moment.

Ralph Waldo Emerson once said “its the journey, not the destination.” It encapsulates precisely my feelings towards travel, but I also think its a great philosophy to live by with any facet of life. Whether its raising children, working on a new project or building a relationship, the beauty can be found in the journey and less so in the outcomes. The latter merely happenstance.