Seminyak and the Bukit Peninsula

After enjoying five days of tropical paradise in Nusa Lebongan we boarded a speed-boat for a short 30 minute ride to Bali. We had decided to spend our last remaining day on our Indonesian adventure in Seminyak.

You can’t win them all and after a great streak of Airbnb rentals, we stroke out. It was “guy” clean, ant infested and really hot. That could be somewhat tolerated, but the worst part was that the rental was cockroach infested. Okay, that’s slightly dramatic, but we did see two cockroaches before bed one night. Which is two too many. Terrifying.

Andrew once shared with me the worst cockroach story of all time.

It went like this: He was staying at a hostel in Hawaii that was literally infested with cockroaches. The owner told Andrew one night to brush his teeth very well because the cockroaches have a tendency to seek out left-over feed in one’s teeth and mistake your mouth as a drain. Absolutely disgusting.

So seeing two in our bedroom right before bed put me in a state of panic. We both brushed our teeth better than we ever had and slept with one eye open. I considered duck-taping my mouth shut, but Peter accused me of being dramatic and probably not necessary.

In hindsight choosing to stay in Seminyak probably wasn’t the best idea.

The guys chose it to be considerate for us girls. We had been staying in places that were aimed at surfing without much activity beyond that. Seminyak has shopping, yoga, restaurants, bars and is very developed. But its developed in a way that is negative. Its over-developed and congested.  It certainly isn’t the island life we had been experiencing.

The problem was that things were pretty spread out so getting to stores or yoga classes was difficult. Also, for the guys, the closest surf was very far away. All in all, for what we were seeking, the location didn’t make too much sense. Of course we appreciated the guy’s attempt to cater to everyone’s interest, but we wouldn’t stay in Seminyak again or recommend it to others.  More of an over night or day trip place.

Nonetheless we still had fun.  We were in Bali after all.  Our backdrop just changed a bit. 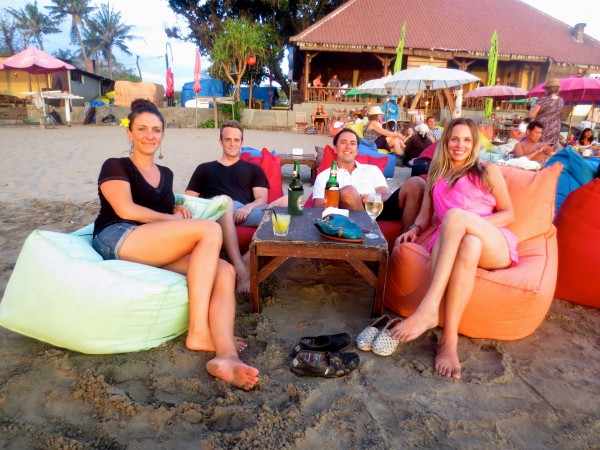 Our first night we walked over to Seminyak Beach, ordered some sundowners, and sat in bean bag chairs on the beach.  See definitely not bad at all.

Afterwords we grabbed dinner at a close by restaurant and had some delicious food and conversations.  We discussed a game plan of how to tackle the next handful of day.  Our top-priority was to have fun which we would achieve through a mix of surf, shopping, eating, spas, and finding curious ways to entertain each other.

The next day was Sunday so we created a “Sunday Funday” itinerary, Bali style. It started off with a quick pit-stop at the Billabong shop to pick up a new-suit and then we were off to our first stop, Potato Head, which is a world-renown beach club in Seminyak. We had all been to Potato Head before (except for Raychel) and all really enjoy its set-up.

Before heading out Andrew (because there might be cute girls at a beach club) decided to shave off his “mustache” that he had been growing out since we landed in Indonesia.  I fondly and aptly called his facial hair “chick repellent” and got a kick out of the slow moving progress that an 18 year could put to shame. 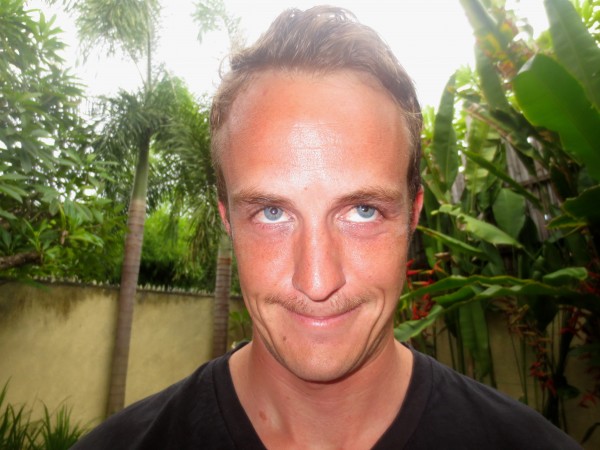 Potato Head was a mix of a scene with people of all ages and fashion.  It seemed different from the hay-day of first opening where it was filled with hipsters, scenesters and lineups just to get in while EDM pumped through the entire place in the ultimate beach party setting.

We were immediately seated inside the restaurant while we waited for a day bed (in the past, day beds would need to be booked days in advance).

While waiting we enjoyed fruity drinks and really delicious food.  Potato Head has a menu certainly worth checking out, including the extensive drink lists. 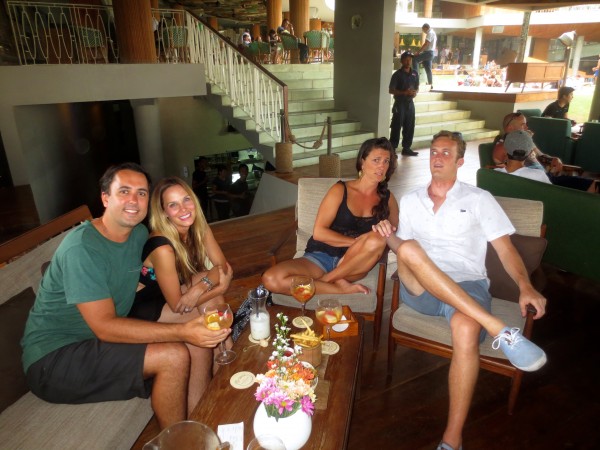 We were able to snag a day bed before sunset which we call considered a big win. 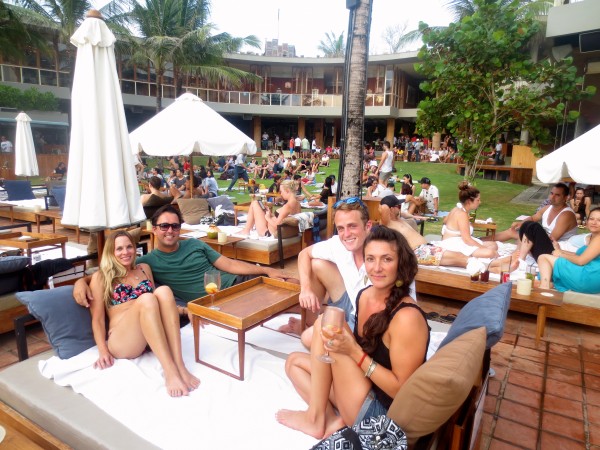 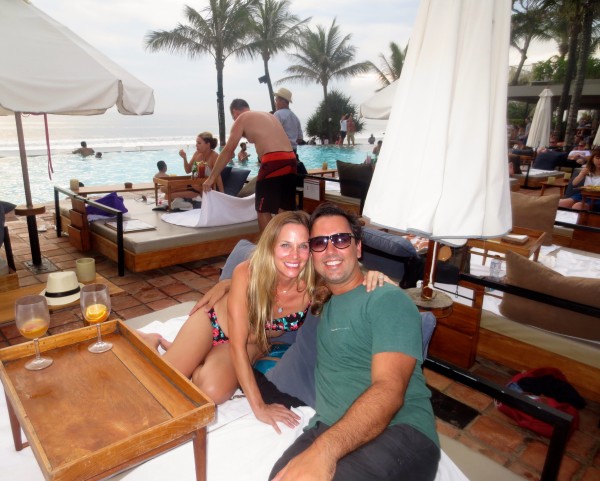 The aforementioned “curious ways to entertain each other” started that night with a thigh size contest between Andrew and Raychel.  I don’t know if the winner had the biggest or smallest thighs.  You would think smallest, but when recollecting back I think we went with biggest thigh was the winner.  Who is the winner? 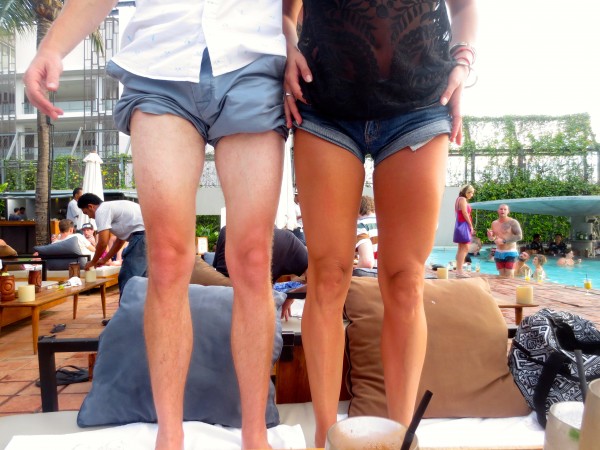 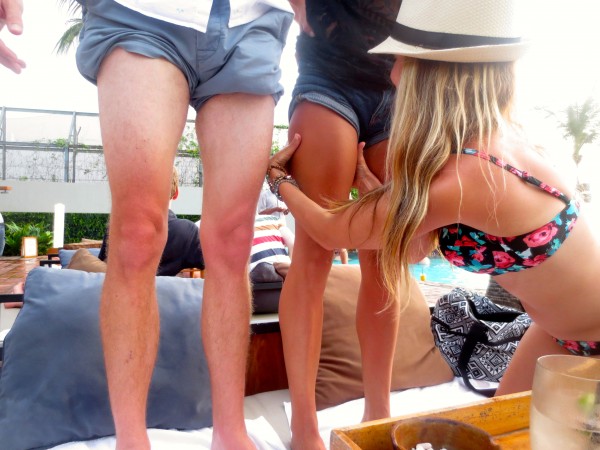 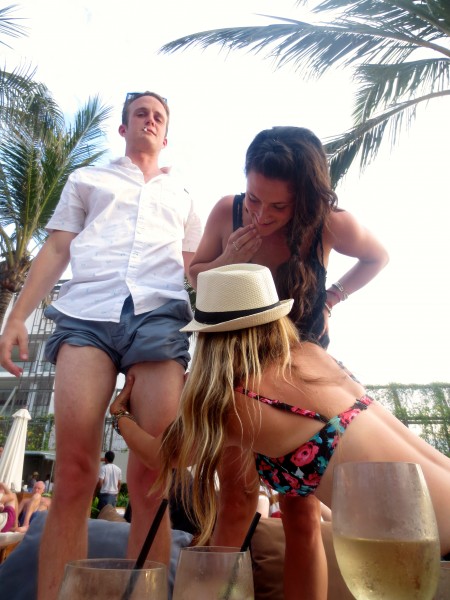 We caught the sunset right from our day bed which provided a perfect view of the sun dipping behind the ocean. 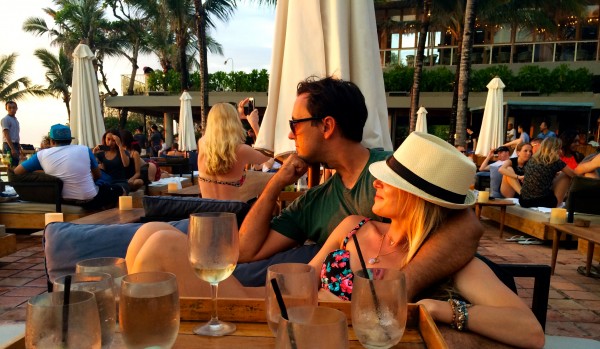 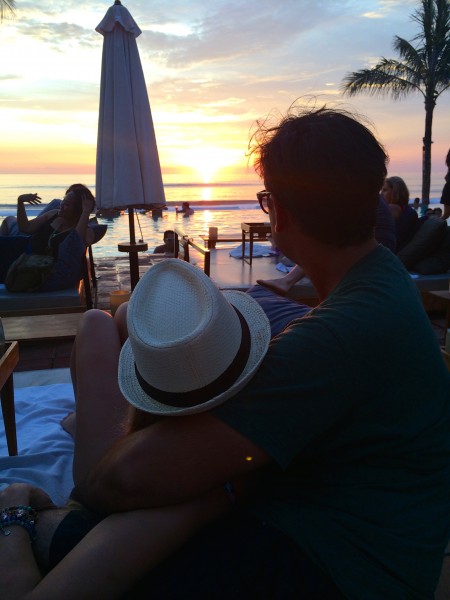 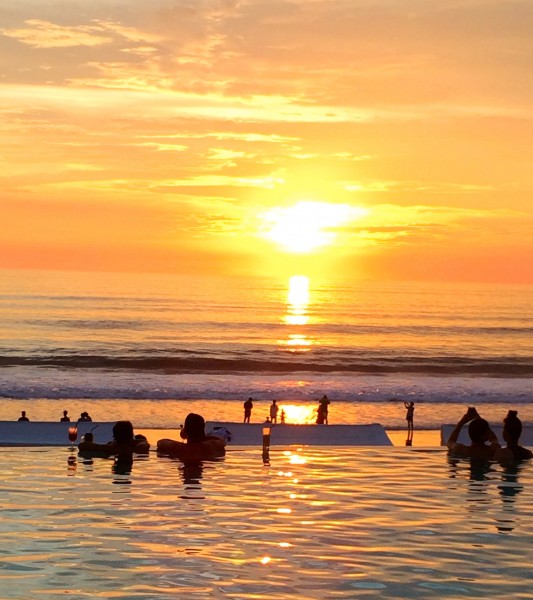 After sunset we took a short stroll next door to the W hotel which is fairly new, opening in 2011.  A really quite beautiful and grand hotel with a modern twist.  We enjoyed the outdoor seaside patio where they played good tunes and had great lighting from all the Chinese moon lanterns.  We ordered up a Mango shisha and all agreed that the contraption they served it in looked futuristic and won the award for best shisha.  There are actual pieces of mango in the bottom. 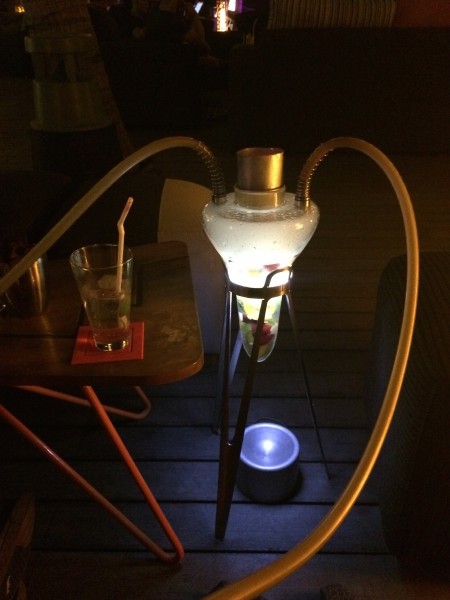 The next day we headed out on scooters to Echo Beach for some surfing for the guys.  I continued my mild obsession of drinking fresh coconuts.  Fresh coconuts seem to taste best in Indonesia and the price is right, typically about $1 USD. 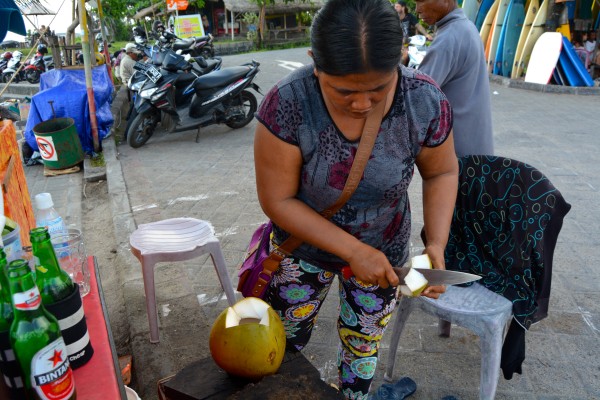 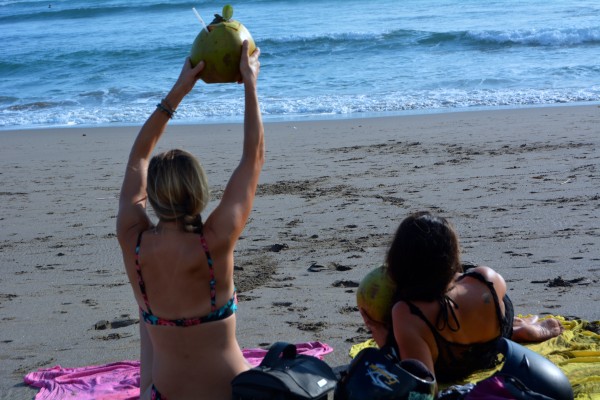 As usual, when the boys got back from their surf session we witnessed the glow of another island sunset. 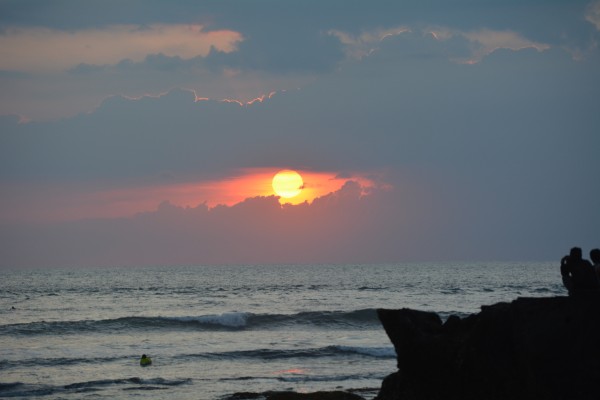 The next day was an adventurous one.

We took to our scooters and headed towards Bukit Peninsula home to some of the most picturesque beaches in all of Bali.  We landed at Balangan Beach which certainly has a wow factor.  A long beach that’s soft sand stretches perfectly  across the shoreline and is nestled in by rocky cliffs.  The sea practically sparkles and twinkles as the sun’s rays bounce off the hues of green and blue.  The other part of the beauty is the seclusion factor.  A true slice of paradise found at Balangan Beach. 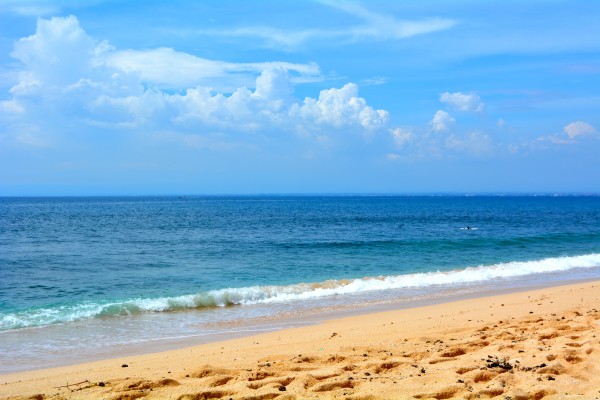 We grabbed some lounge chairs, took it easy for a bit, and of course ordered up some coconuts. 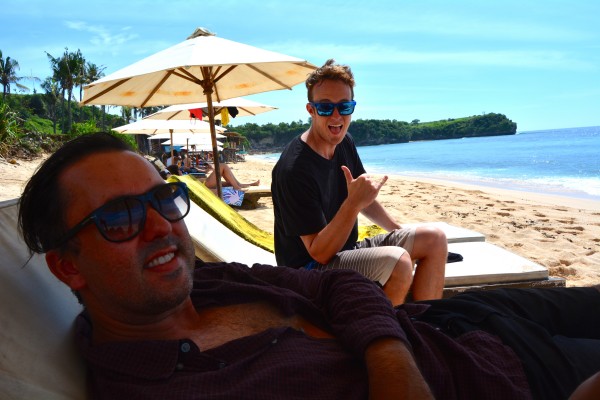 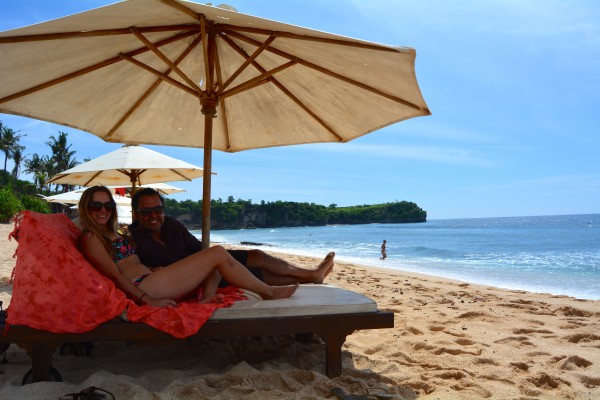 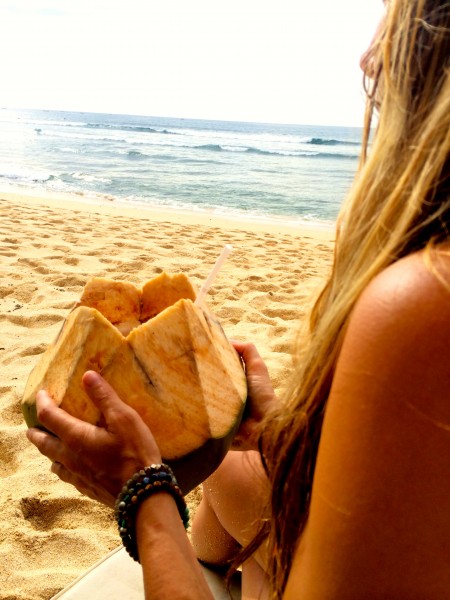 Andrew and Peter got an ok surf session in during a stressfully shallow low-tide while Raychel and I enjoyed some girl talk and seaside lounging. 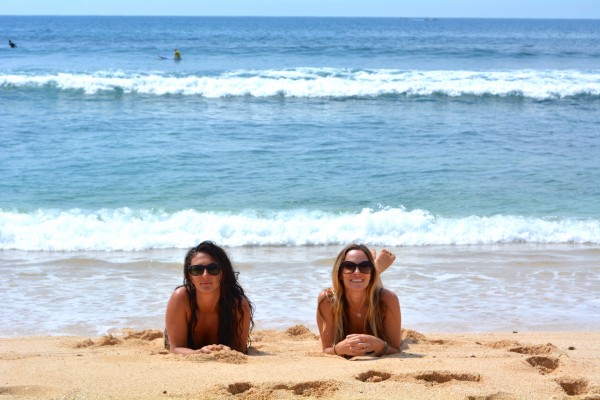 We also did a photo shoot for our friends at August Girls to promote their bracelet line.  Still feels really unnatural for me.

I fear they might fire me as their international promotor. 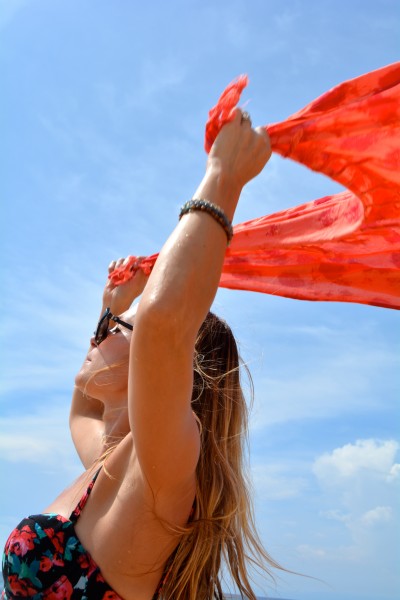 Our next destination was Rock bar at AYANA resort, a famous spot for sunset watching.

When we got to the resort we parked our bikes, walked through the luxury hotel grounds, and found our way to the entrance of Rock Bar where a long line was formed.  We were informed by staff that there was a 45 minute wait.

Racyhel inquired, “Is there a VIP entrance?”

For some reason completely unknown to us the attendant replied, “Yes follow me.”

Good lesson in ask and you shall receive.  He walked us over to a separate entrance where we descended a set of stairs and were ushered through the back entrance of the bar and seated right away.  CHA CHING.

We ordered up some snacks and got settled at our perfect table by the shore.  On a side note watching the sunset from Rock Bar isn’t better than watching it from above on the lawn of the resort.  Rock Bar has just become a novelty in Bali hence the long line to get in, but when you have Racychel traveling with you lines don’t exist. 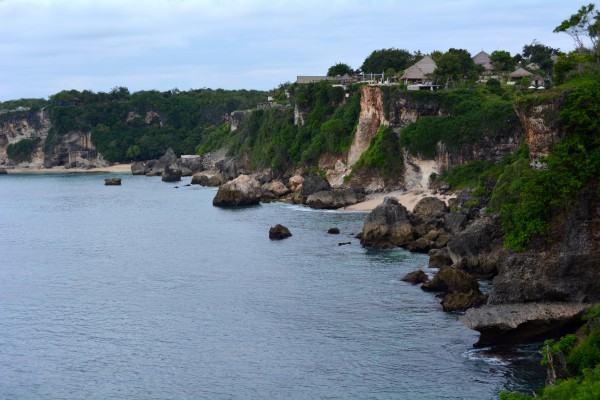 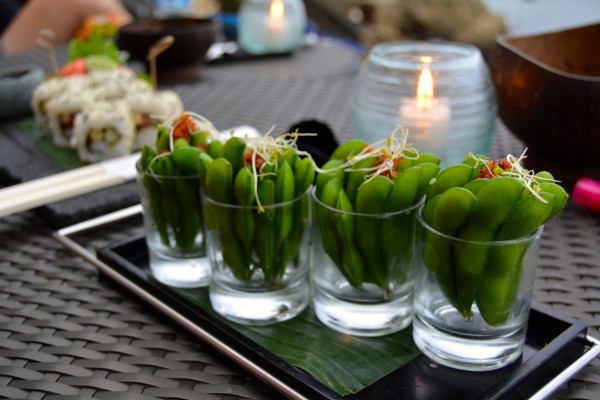 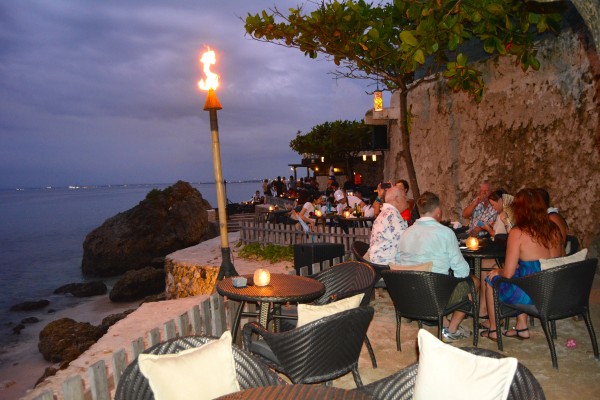 This night was our second to last in Bali so Peter and I decided to have a date night before our time came to a close.  Meanwhile Andrew took to Tinder.

Peter and I found ourselves at a top rated restaurant, MAMA San were we enjoyed tasty Asian fusion cuisine, a “retro vintage” vibe and… RED WINE!

I love my red wine and it is tough to find good wine while traveling in certain areas and with it being so hot it doesn’t sound good a lot of the time.  The restaurant was air conditioned, which isn’t common, and had an extensive wine list so I was a happy camper.

We followed up dinner with a night cap at the W Hotel, enjoying it so much from our stop a few days prior.  Raychel, missing the crew, met up with us.  We attempted to crash Andrew’s tinder date, but no such luck.  He later explained it wasn’t because he was “embarrassed” of us, but I wasn’t convinced.

The last day we finally took advantage of one of the high end spas that Seminyak in known for.  We booked at Sundari where we each got 2.5 hour treatments.

I encouraged Andrew to get his first microdermabrasion and when he walked out of his treatment he had a whole new face.  It really was such a contrast from when he first went in.  I told him he would come out looking like Brad Pitt and I wasn’t entirely wrong.  Now when Andrew and I are looking for a fun activity to do together we book microderms at the spa.

Afterwords the guys went out in search for one last surf session while Racyhel and I enjoyed some shopping and happy hour at Seminyak Beach.  We all made plans to meet up for dinner.

We had one last crew dinner at an Italian Restaurant, Ultimo, which proved to be an excellent choice between the food, service, and atmosphere.  We enjoyed the crew company for one last evening before Andrew, Peter, and myself took off on our next planned event. 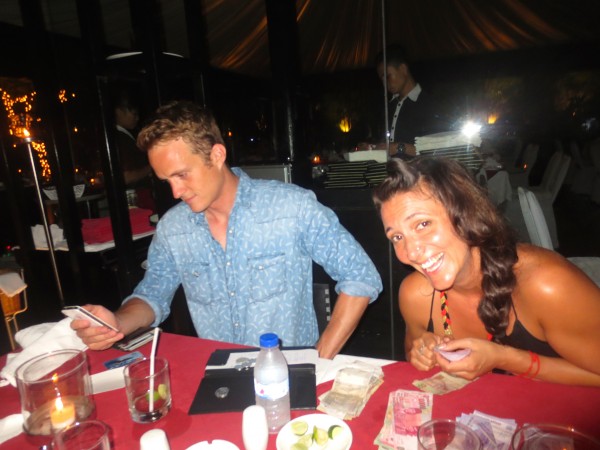 Andrew checking his tinder game while Raychel tries to figure out what she owes.

We had an early flight to catch and some packing up to do so we ended up back at the villa shortly after dinner.

We said our good-byes to Raychel bright and early the next morning.  She was going to stick around a bit longer in Bali.  Andrew, Peter, and I weren’t quite finished with our adventure together.  Next up we were headed to the Philippines to check out the much talked about island life of Palawan, but first a work trip in Manila. Play time was taking a short hiatus for Peter and Andrew.

I felt a little sad to leave Bali because it truly is a top world destination, but luckily we were coming back in May with our friends Travis and Jen which helped ease any despair.

Thanks to all who are following along.  I’ve seen quite a surge in numbers lately.  I’m humbled by all of you who care to take time out of your day to read about our mishaps and adventures.  I truly appreciate it and it really keeps me motivated to keep bloggin.  Much love and gratitude. 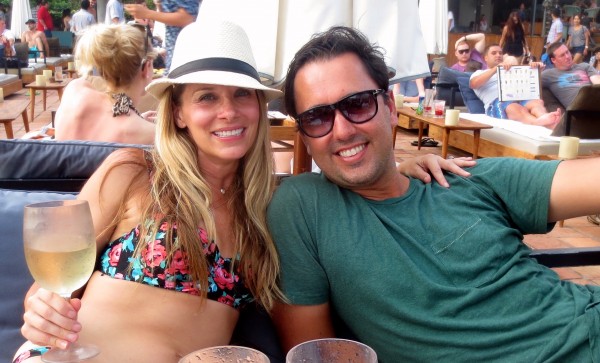