A night in Osaka

On our last morning in Kyoto we packed up early and headed to the train station to catch a bullet train South to Osaka.

We stopped for one last Kyoto meal. 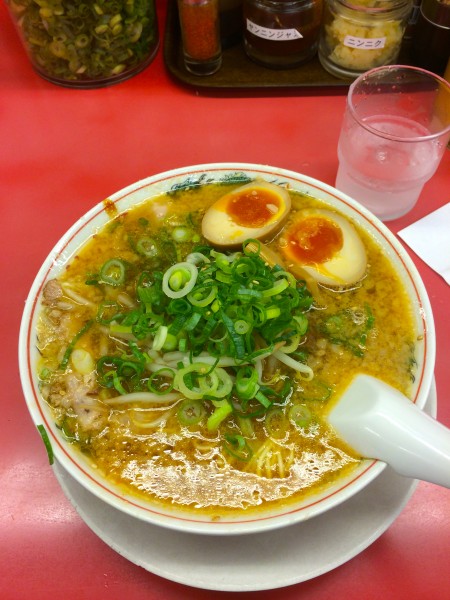 At what point do I admit that this had become an addiction?

Osaka is the 3rd largest city in Japan.  The city offers an electric, good vibes energy.  It’s known for having friendly, funny, and welcoming locals. The trend in fashion is forward, hip, and experimental.  The culture is urban with a focus on food as it is known as the nation’s kitchen.  It’s a city that one is encouraged to eat your way through.  As if we hadn’t already been doing that.  It has a well established, vibrant night life with live music, arcades, clubs, bars, and some of the brightest and biggest neon signages in the country.

As we were walking from the train station to our hotel, we stumbled across this. 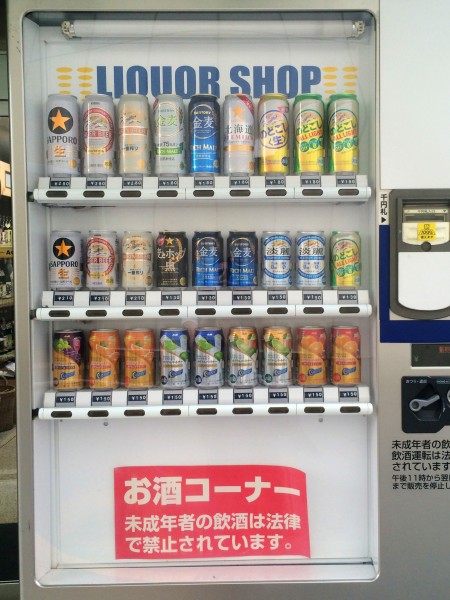 That is a beer vending machine.  Just sitting there…outside…on the side of the street.  I had heard about these vending machines and had been on the look out, but hadn’t found one in Tokyo or Kyoto.  I had given up hope that they really existed until Osaka delivered.  The concept alone tickled my funny bone and I really wanted to purchase one for the novelty of it.  More on that later.

We got checked in at Osaka Station Hotel where we had 3 beds in our room.  I don’t exactly know why, but I also found this funny which I think is a theme in Osaka.  There is a lightheartedness to the energy in Osaka.  I mean they have beer in vending machines. 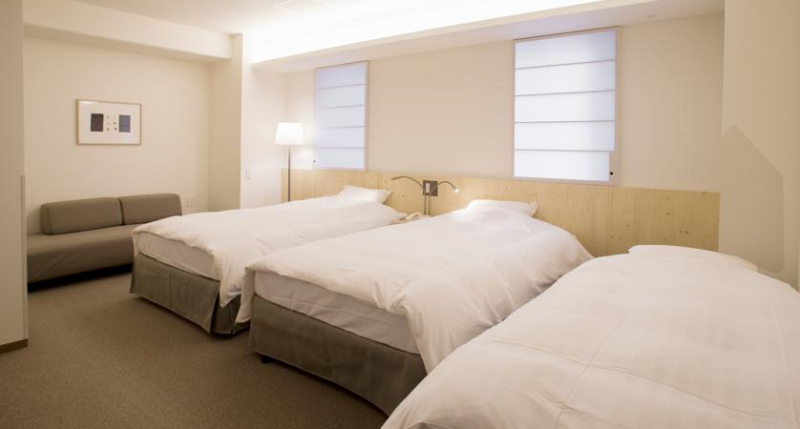 Also located about 5 feet from our hotel door was this. 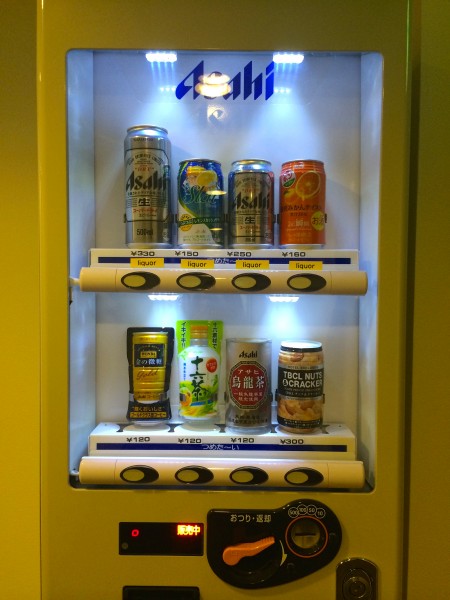 Yep, that’s a mini beer vending machine located steps from our door at the end of the hotel’s hallway.  This concept is much different from a minibar.  Way more fun!

Peter and I set out for some city exploration and to find some good food.

Peter was thrilled to find out that Osaka also had an Ichiran—our favorite cheap ramen spot in Tokyo.  Playing into our addiction, we decided to make this our first stop.

As we walked over, in the daylight, I could already get a sense of the positive energy, quirkiness, and absorbing architecture. 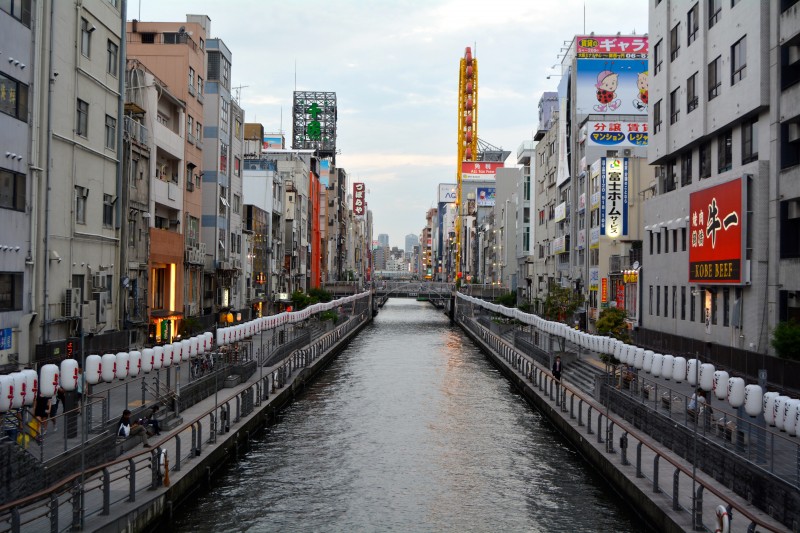 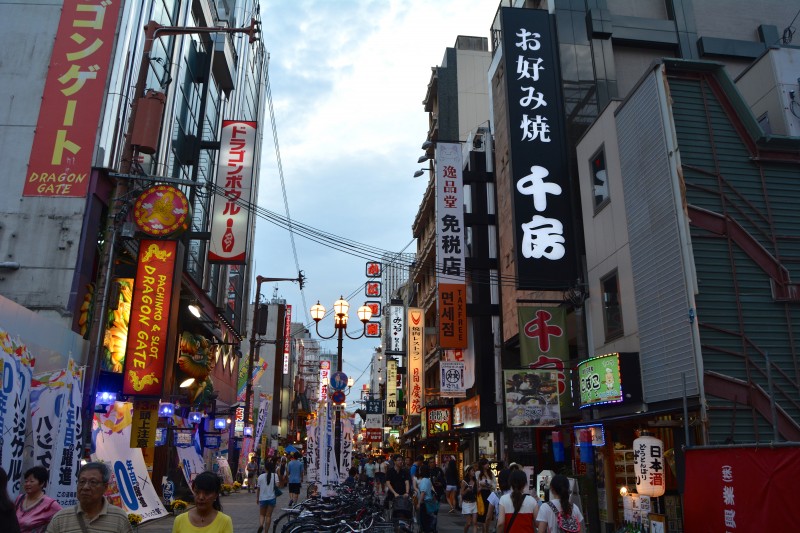 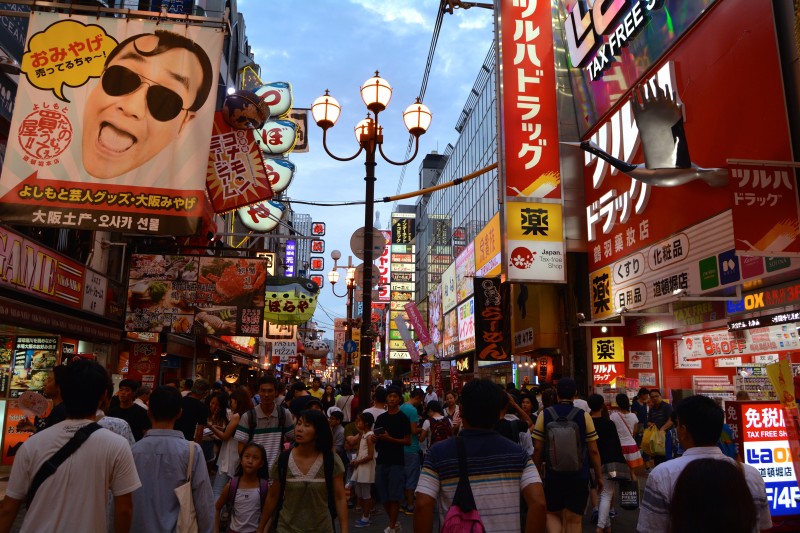 The ramen was the exact setup with partitioned off individual seats and really, really excellent noodles. 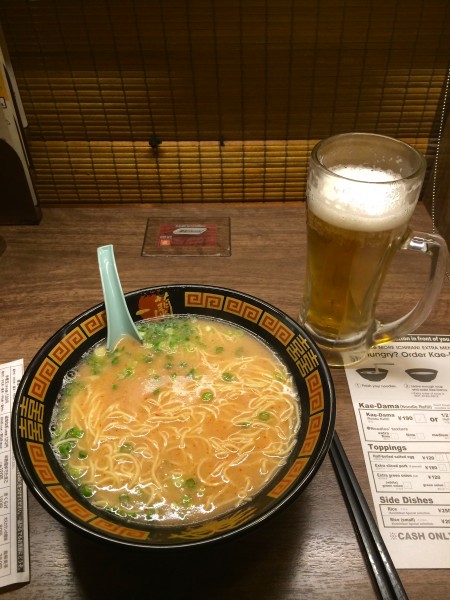 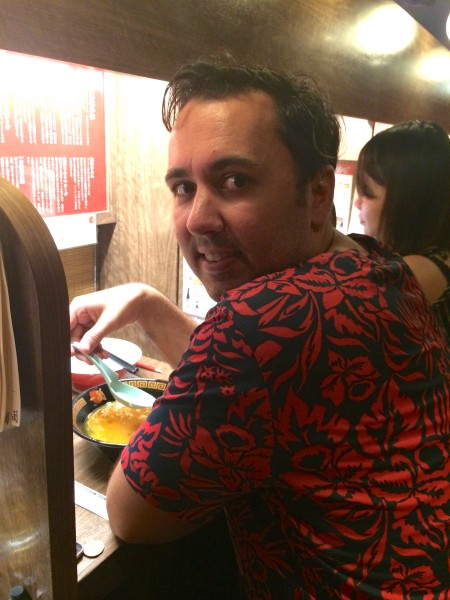 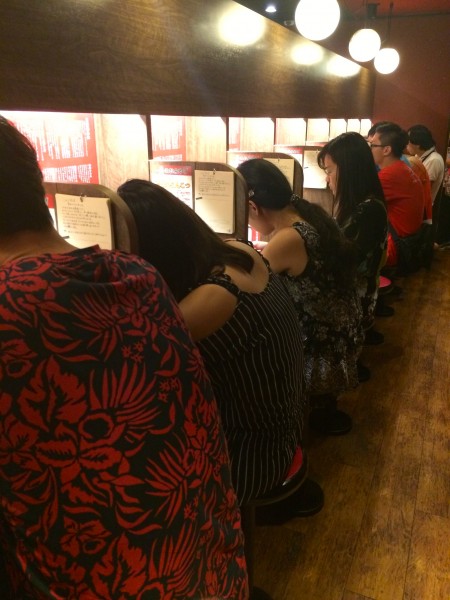 I had read about a special and famous Osaka cuisine called takoyaki or octopus balls.  And no it’s not octopus testicles, but rather fried and breaded octopus shaped in balls.  It is the rage and I considered a must try.  Peter had way overindulged on ramen with ordering a second helping of noodles for his broth— so he was out.

I waited in the long line in anticipation while wondering if this dish would be worth the hype. 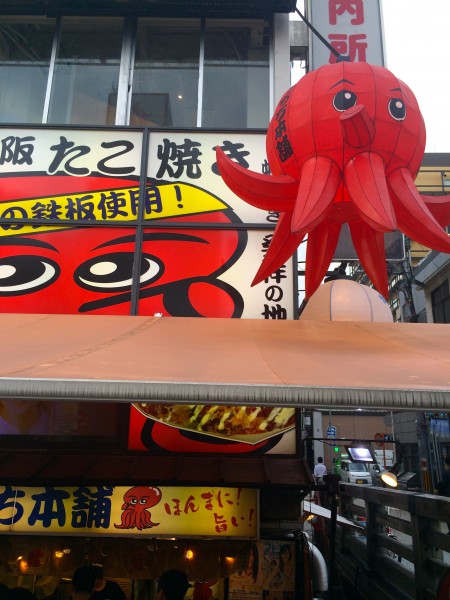 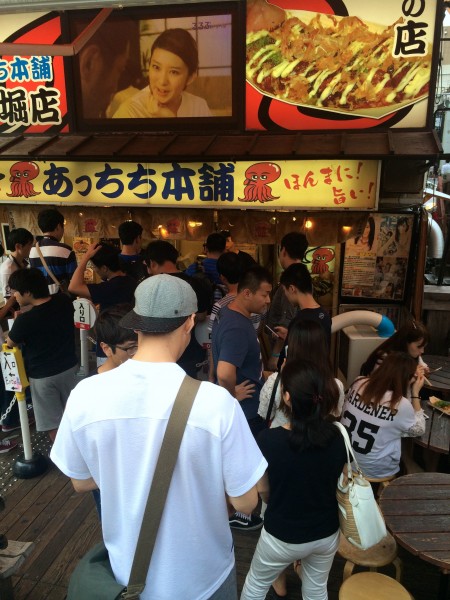 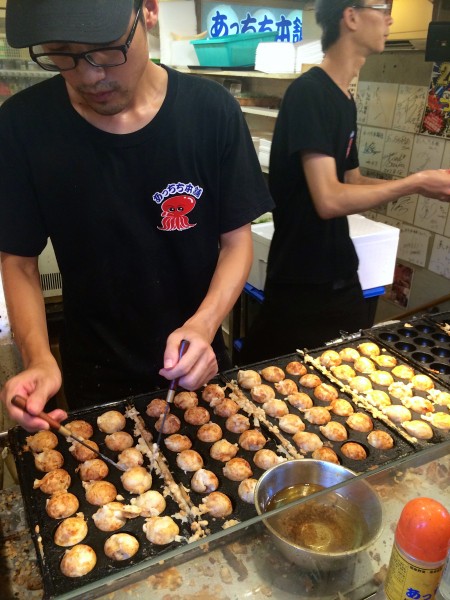 I don’t know if Japan had already won me over with the sushi and ramen, but the verdict for me was that it was just alright. 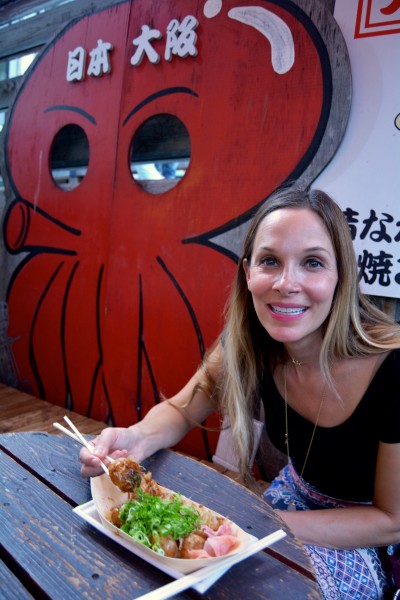 Osaka really comes alive at night.  As the sunset, the neon lights began to radiate off the streets and the jovialness of the locals really started to shine.  Osaka becomes overly photogenic in the night sky.  Peter and I skipped around Dotonbori taking in the vibe and snapping photos. 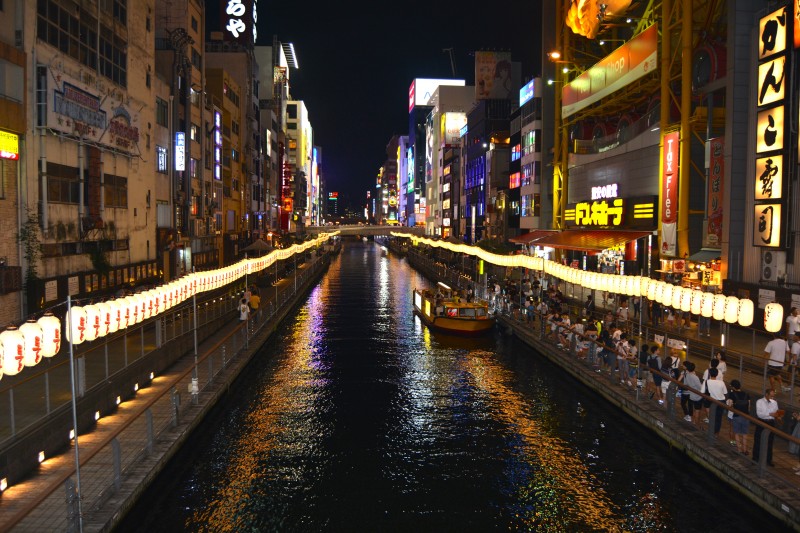 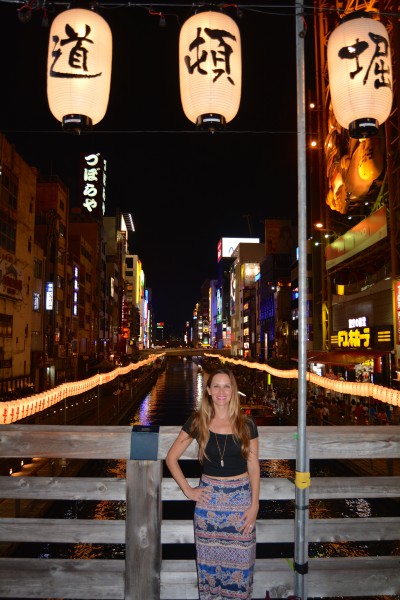 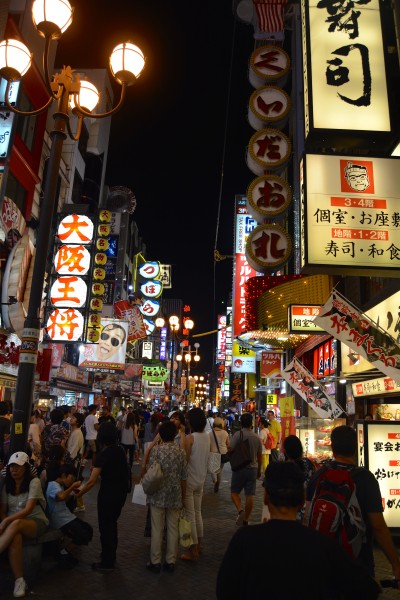 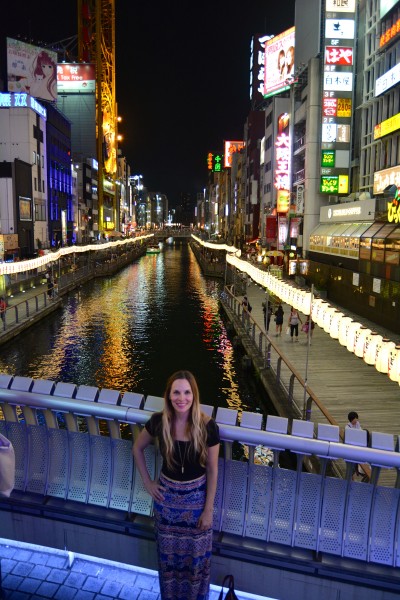 The Glico running man sign is a landmark in Osaka and a popular tourist photo to capture.  Glico is a Japanese confectionary headquartered in Osaka.  The sign is modeled after a Filipino sprinter named Fortunato Catalon who after winning a big race had a beaming smile that made him well liked. 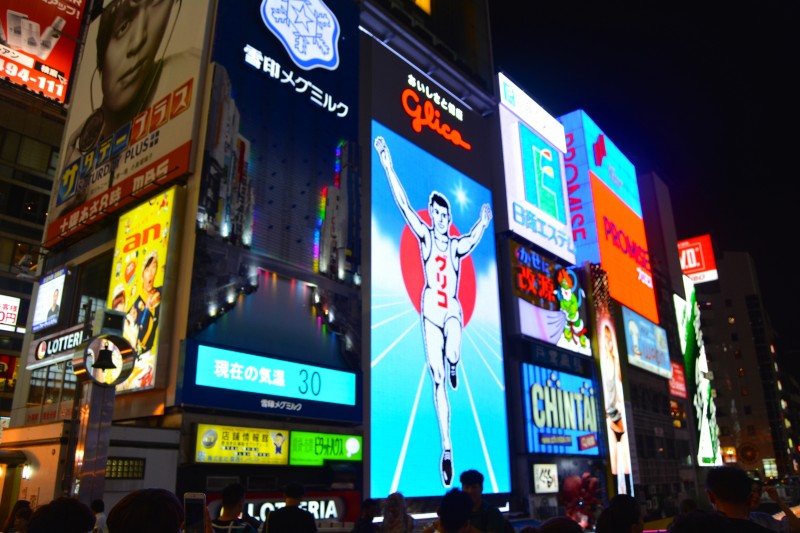 While walking around Peter and I found ourselves on the big screen in the center of it all as a TV show beamed down on the crowd. 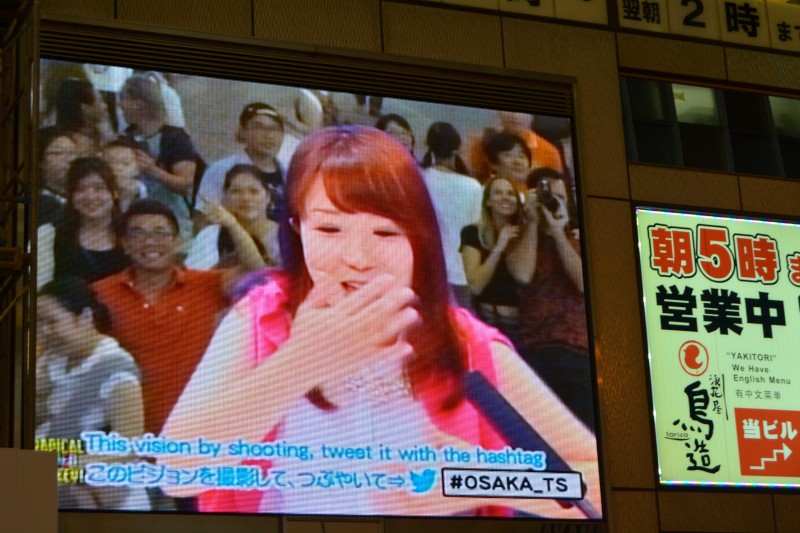 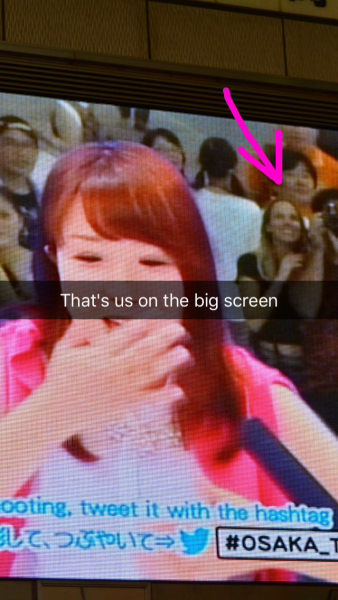 Adjacent to Dotonbori is Shinsaibashi Shopping Arcade, an area full of stores which offer a myriad of just about any type of fashion out there.  I was thrilled.  Peter went on a hunt for Japanese soft-serve. 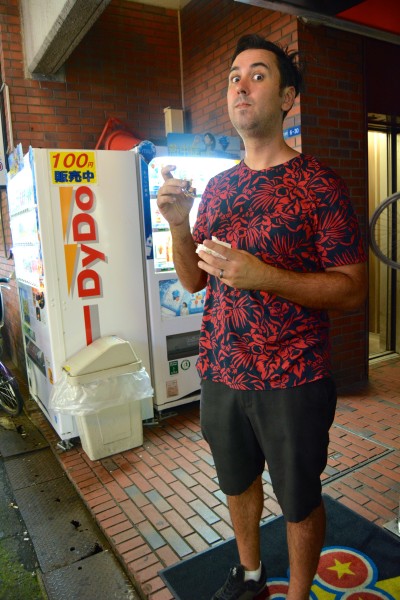 Shoppers go bananas in these stores.  I was walking around a drugstore that has an emphasis on beauty products.  I was picking up just a couple of things, but couldn’t help but notice most women were shopping like this. 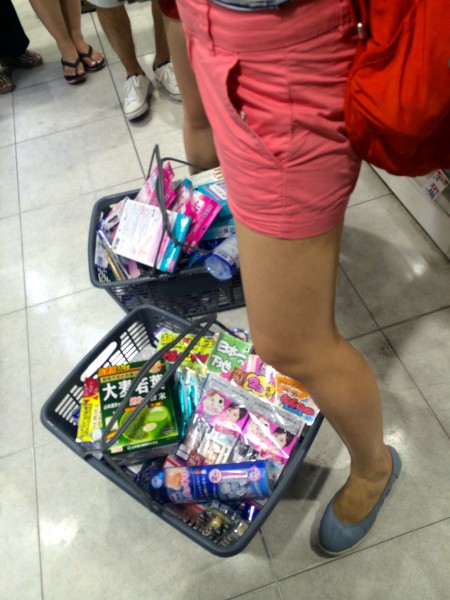 I was sure to show Peter this picture so that he could see my shopping habits aren’t out of bounds.

After this we walked around the Umeda neighborhood in the Kitashinchi district.  Kitashinchi is ultra chic with tons of cozy restaurants and bars spliced together with….hostess clubs? 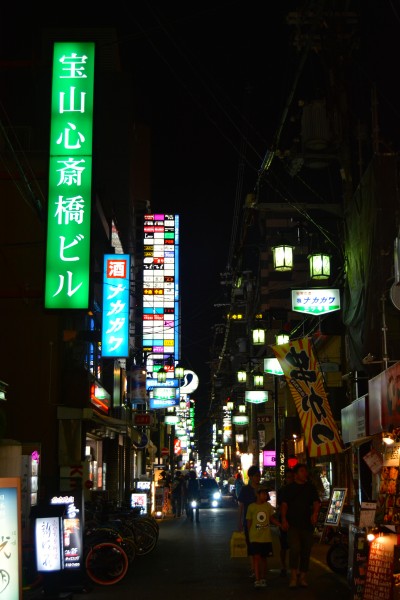 Peter and I dipped into one of the dim-lit, cozy bars and ordered a couple drinks.  As we sat there and chatted we both realized we wanted to do the same thing—go back to the hotel and buy vending machine beers.

We stopped at the vending machine outside the hotel and made our purchases.  Once again Japan delivers—the beers were ice-cold.  An absolute perfect temperature.  How do they do everything so efficiently and perfectly? 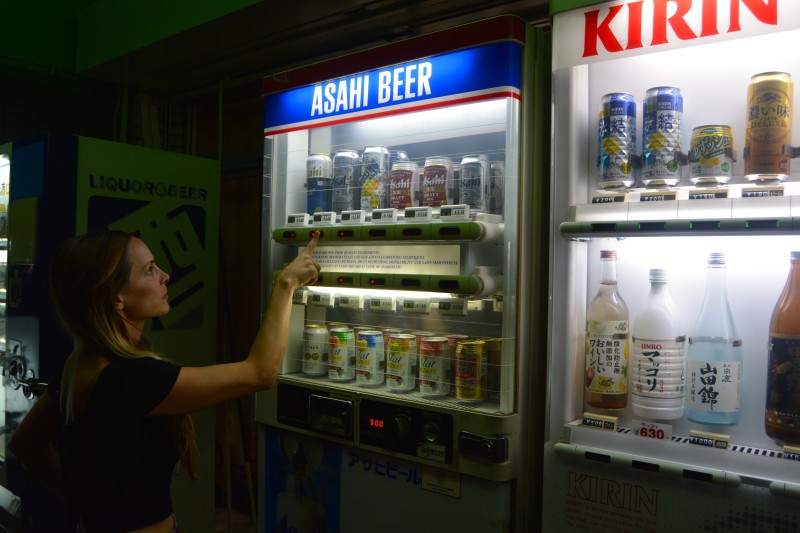 We retreated back to our room where we clinked our cold beers and marveled at what an exceptional trip we had in Japan.  After those beers were gone there were a couple more trips to the vending machine right outside our room.  How can you not take advantage of that? Peter would time me each trip to see how quickly I could do it.  It was always under a minute.  So our last night in Japan was spent getting drunk off super cold vending machine beers.  It was nothing short of a perfect close out.

The next morning we were heading to South Korea to meet up with our friends Peter and Debbie.

At the airport the next morning, I had one last sushi breakfast before saying my final good-bye to Japan.  Even airport sushi is on point. 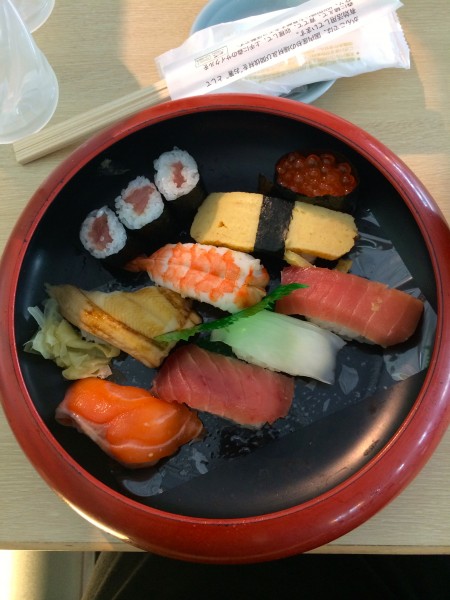 There is so much to say about Japan, but to sum it up—I absolutely love this country.  I have never had so many unique experiences and even emotions brought out in one country alone.  Just as people had told me, it will feel so foreign, it certainly did, in all the right ways.

Peace out Japan.  See you again.  I hope. 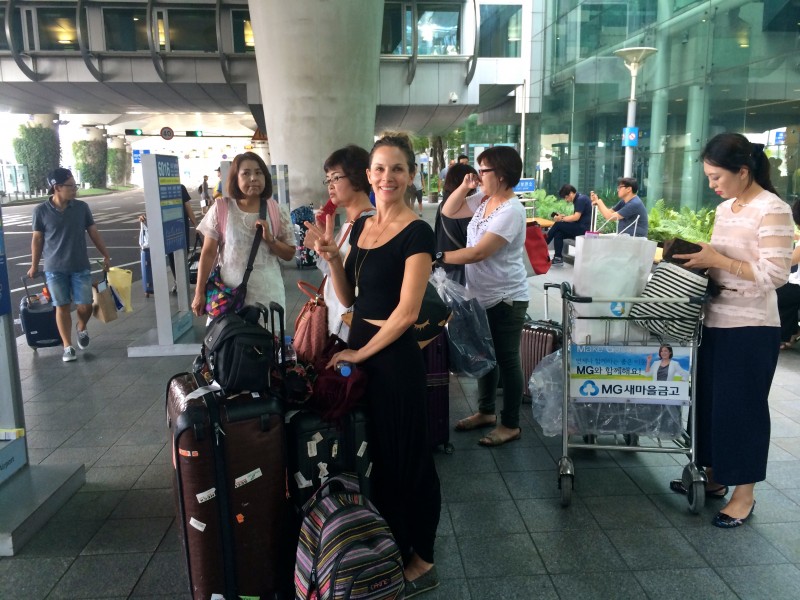