Vientiane, Bangkok, and a bath tub in the Hong Kong airport

The Laotian road trip continued after our brief visit to the scenic village of Vang Vieng. We were off to the capital city of Laos, Vientiane. It was another adventurous drive of four hours of bumpy, pot-holed and zig-zagging narrow roads; Peter was our trusted chauffeur who claimed to have “understood the flow of Laotian traffic” by that point.

Vientiane sits right along the Mekong River that separates Laos from Thailand. Its know for its laid back and slow pace vibe as well at its French colonial architecture that juxtaposes beautifully with the Buddhist temples, stupas and art.

We finally arrived in Vientiane and checked into the Green Park Boutique Hotel which was a no-nonsense, no-frills hotel with a convenient location. It seemed that it mostly hosted businessmen.

Our first night we decided to treat ourselves to a massage after the long, uncomfortable car ride.  We strolled over to Champa Spa and signed up for 90 minute Swedish massages for the smart price of $6USD. The massage started well but the masseuses starting speaking to one another, not realizing that Peter understood their native tongue. They were plotting to end the massage after 60 minutes and then instruct us to take a shower. That way we’d have a 90 minute “treatment” and they’d have to work less.

When the spa finished Peter starting speaking to them much to their chagrin. They were ashamed and embarrassed and ending up hiding as we left the spa instead of the traditional goodbye.

After our shortened massages, we walked over to Nam Phou Fountain Square which is a lively outdoor area with bars, restaurants, and live music all encircling a large fountain.  Peter and I took in some tunes, enjoyed decent food, and recapped our year of travel thus far.   We had traveled a lot since the start of the year.

Our second day in Vientiane and our last in the country of Laos we took to the tourist sights.

We started at the Buddha Park which, as the name suggests, is a public park full of hundreds of Hindu and Buddhist statues.  The park was built in 1958 by a monk who studied both Hinduism and Buddhism hence the dual statues.  This was unlike any park I’ve ever seen. I’m not sure if it was the ornate detail of each of the statues, the sheer number of sculptures or the enormous size of some of the pieces, but it was a real treat to enjoy this park in the afternoon sun.

The entrance to the park foreshadows the interesting statues that await you on the other side. 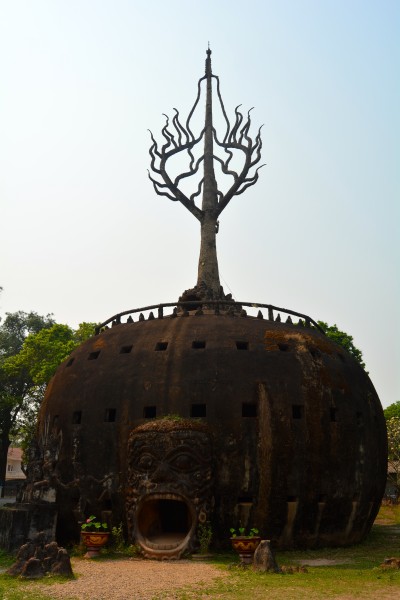 Once inside we hopped around from statue to statue exploring their intricacies and coming up with fun story-lines from our own imagination of what they signify. 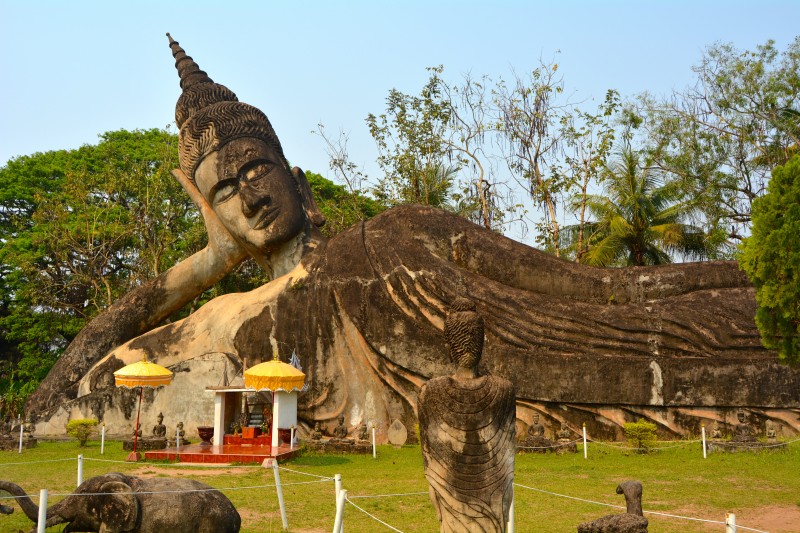 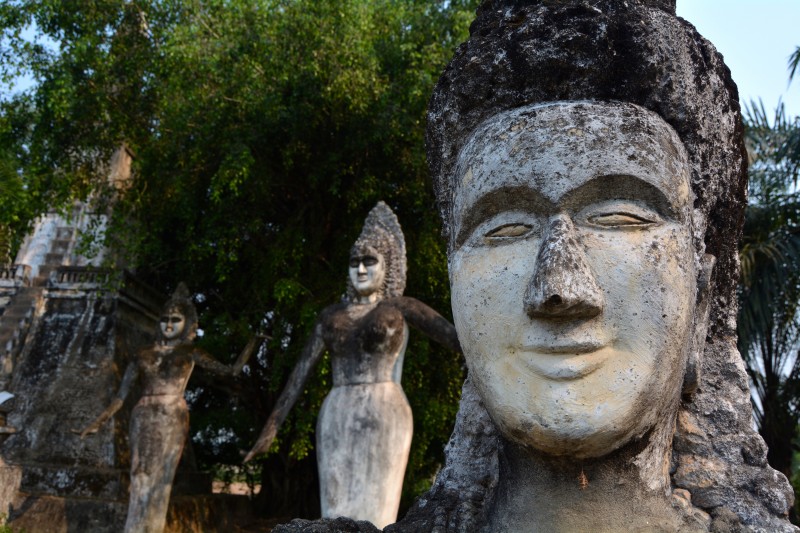 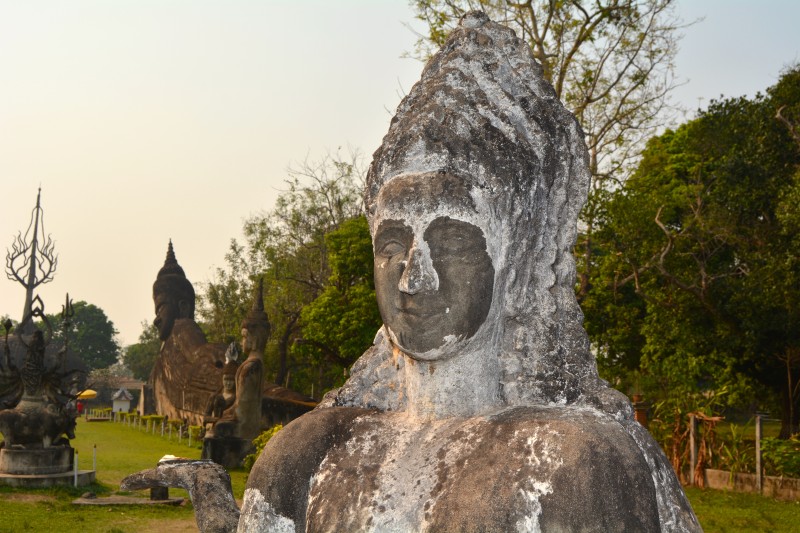 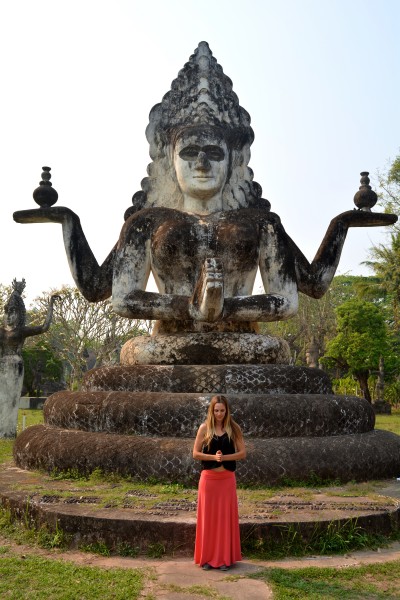 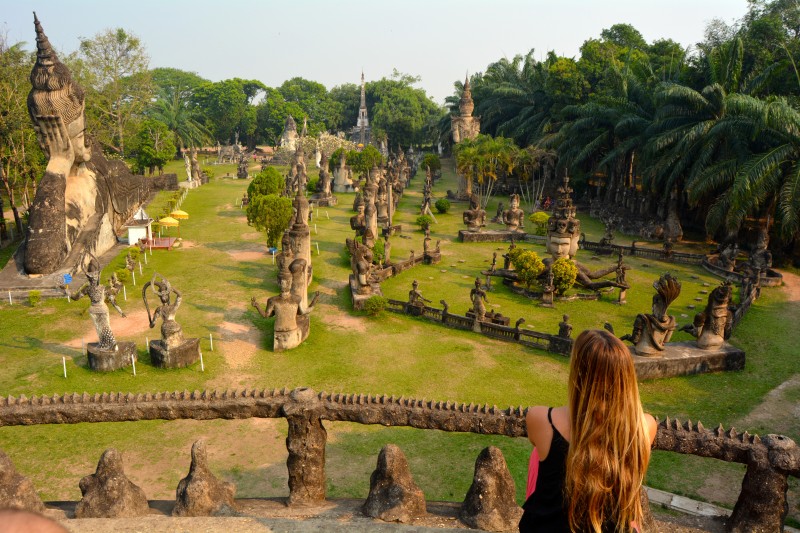 After a hot afternoon in the park, I opted for a bit of “reclining.”  Peter reluctantly snapped this photo of me.  I had to explain to him that Buddhists have a sense of humor as well. 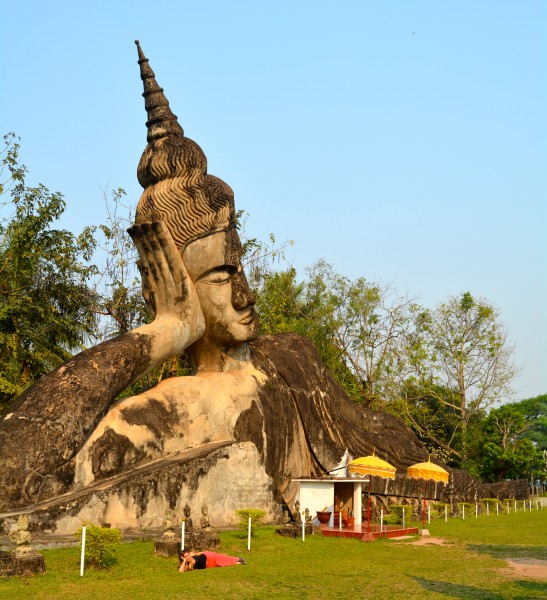 Our next destination on our sightseeing touring was Wat That Luang Thai, a complex containing a remarkable golden reclining Buddha with a smattering of bright temples. 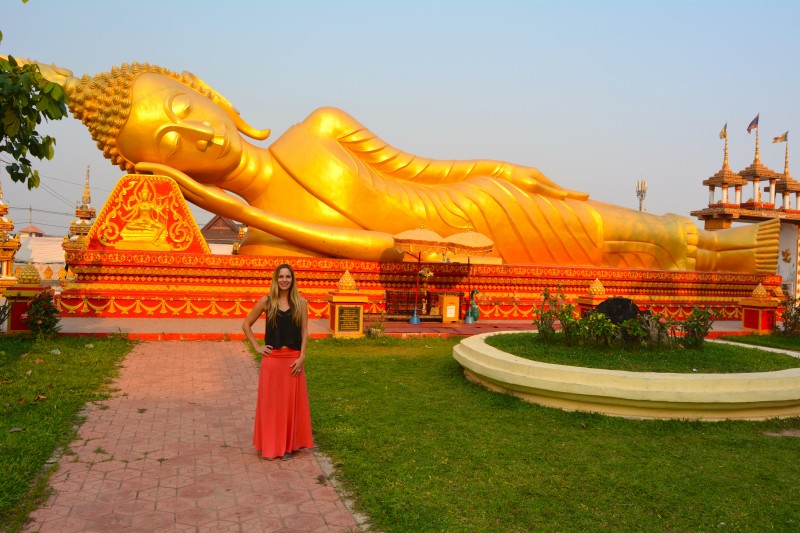 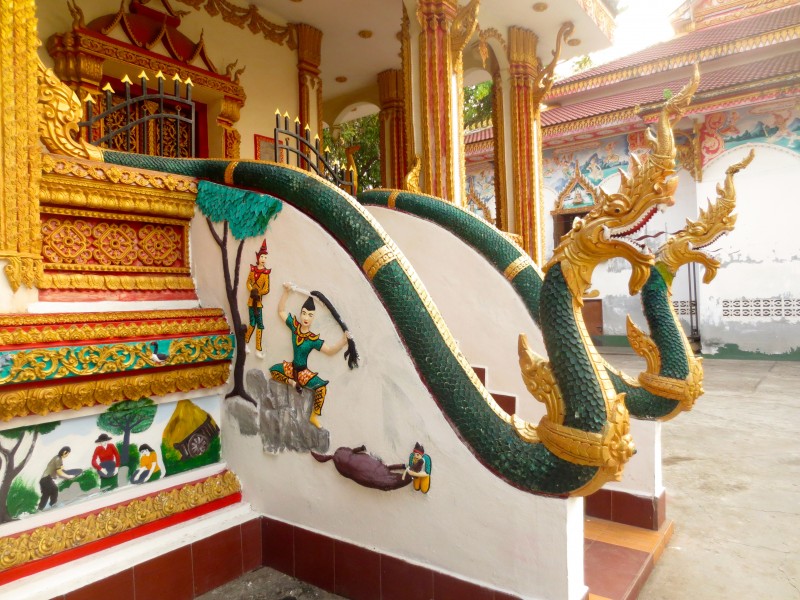 Adjacent to the temple complex is Phat That Luang a golden stupa and a national symbol of Laos.  Entrance to the stupa was unfortunately closed, but we were still able to have a grand view from just outside the entrance. 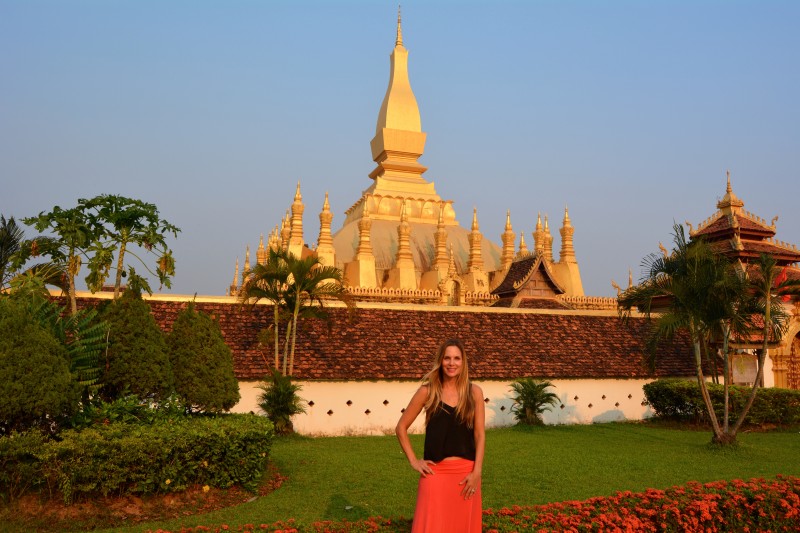 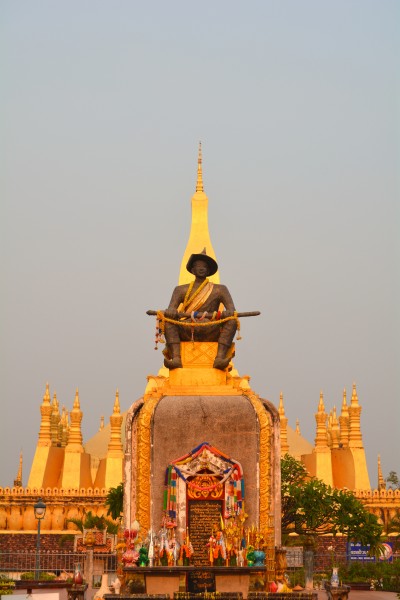 Next to the golden stupa is Wat That Luang Neua, a large three tiered Buddhist temple. 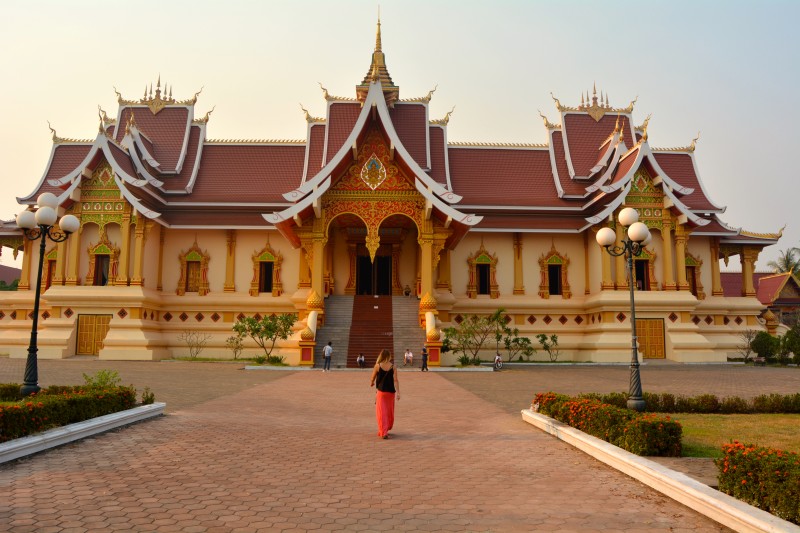 After a full day of sights we set back to our hotel and walked over to the city center.  As sunset approached we found a spot along the bank of the Mekong river where we settled in to watch the sunset show.  Along the banks of the Mekong is an array of activities including local women offering pedicures, couples strolling hand in hand, young boys playing soccer and my personal favorite – color-coordinated live aerobics. 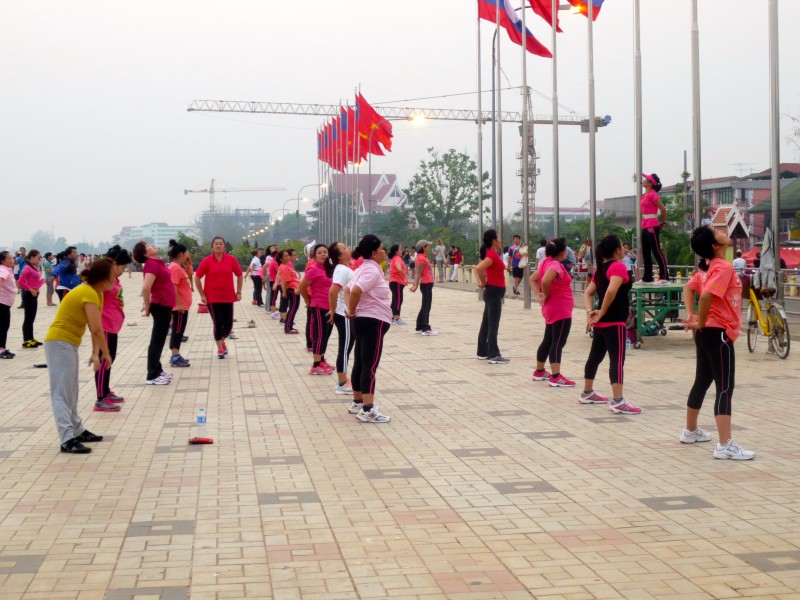 While aerobics is in full swing, the night market stalls are simultaneously being set up by local merchants.  Night markets catering to tourists run rampant across Southeast Asia, much to the dismay of Peter. I convinced him that we would just “check it out real quick.” We mazed through the market and for once, Peter found something that caught his eye. 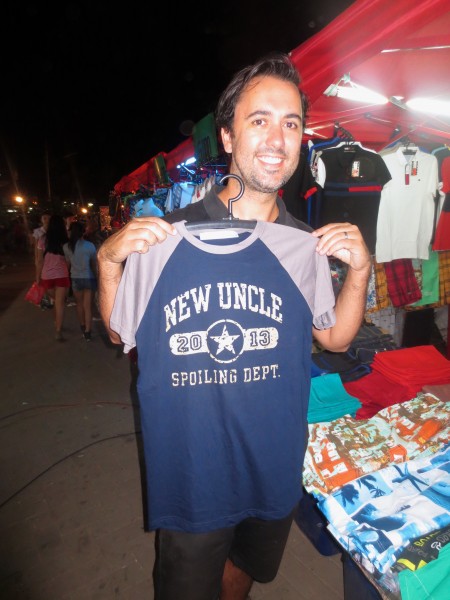 After Peter made it through yet another night market he rewarded himself (or us) with another cheap massage. This time we weren’t shorted on the time either. Things were looking up!

The next morning it was back to Bangkok for a few shorts days where we would catch our positioning flight back to the US.  We had weddings to attend and babies to meet.  In that vain I did some serious shopping for many of my friend’s kids at MBK. I had fun picking out all sorts of colors and sizes while heavily negotiating with the employees.

Peter and I stayed at our go-to serviced apartment in Bangkok, Pan Pacific, which we used as our base while we whizzed around the city on the sky train and motorcycle taxis. 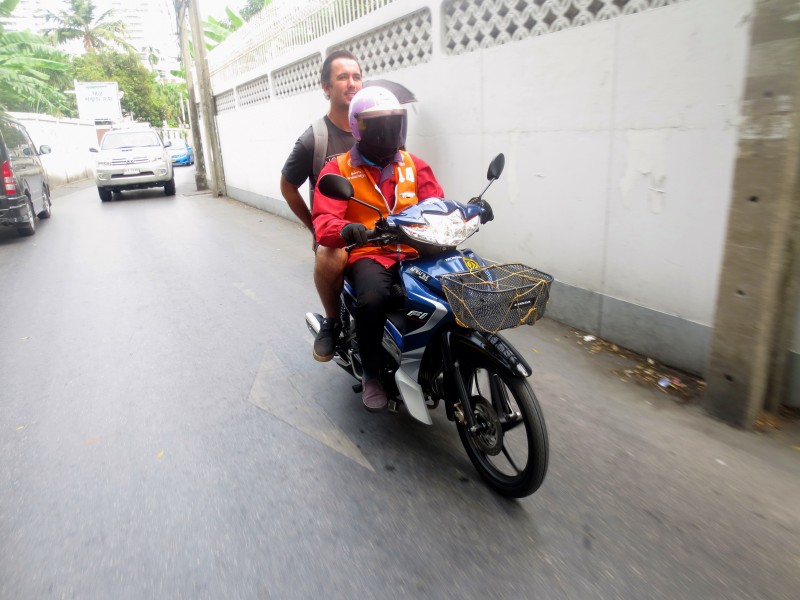 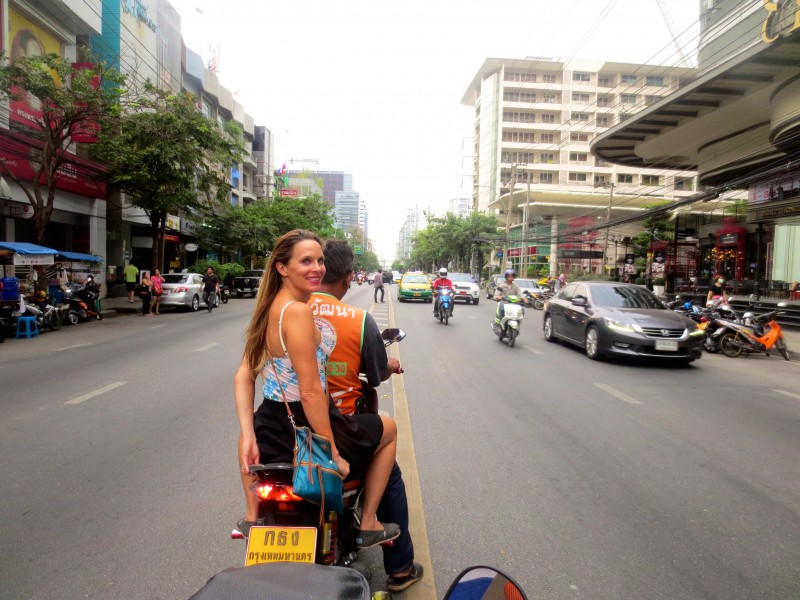 I also got to see The Hive, a new co-working space in Bangkok, and Peter’s second home in Bangkok. Its a perfect place for him to work filled with five floors of entrepreneurs. And all the free coffee you can drink. 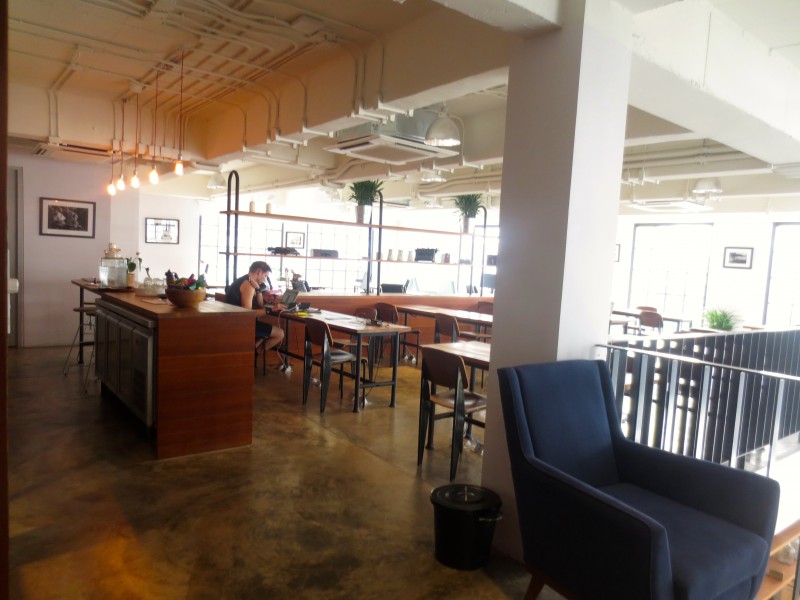 Then we were off.  It was back to the US.

We headed out early in the morning to Bangkok airport where we would catch a short flight to Hong Kong where we had a layover and then back to LAX.  I realized that the Bangkok airport was starting to feel really, really familiar, even more so than LAX. 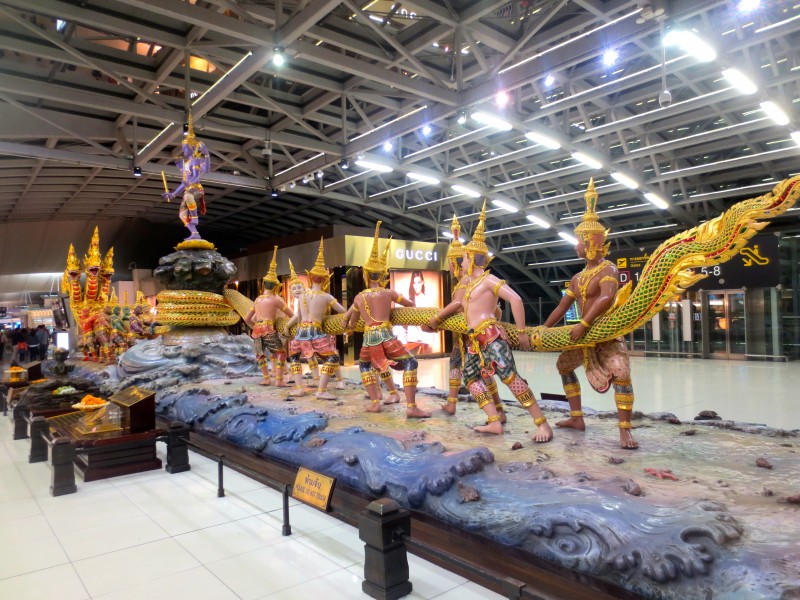 Here is the wildest thing about the First Class lounge in Hong Kong – you have access to your own private room which includes a sofa, shower and bathtub. Yes, a bathtub. You can literally drink champagne while sitting in a bathtub and simultaneously watch planes take off and land, just minutes before your First Class flight. The 1%’ers have it nice. 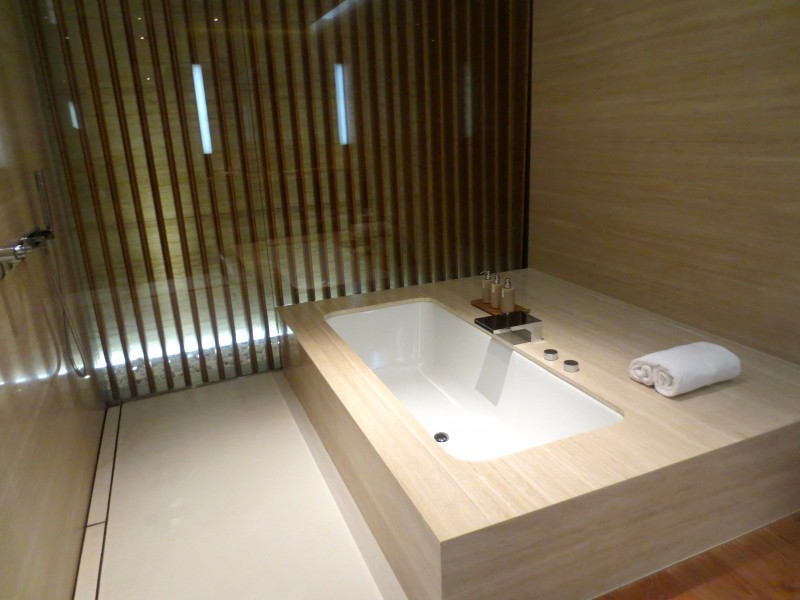 Peter was unable to get us two award tickets on the same flight, but was able to get us on the same day. He decided to leave first so he could get his car in Los Angeles and pick me up a few hours later.  So with him leaving the First Class lounge before me, I was forced to make new friends. 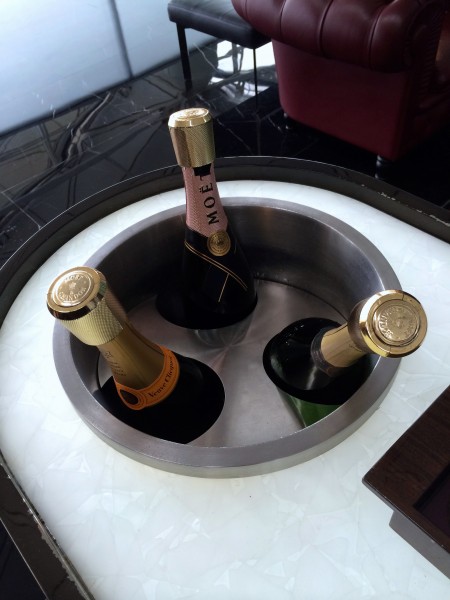 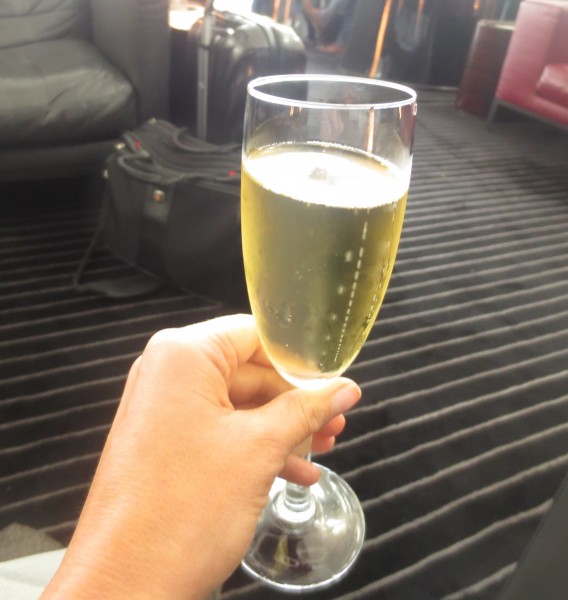 Time travels fast in that type of environment so before I knew it I was boarding my return flight home. 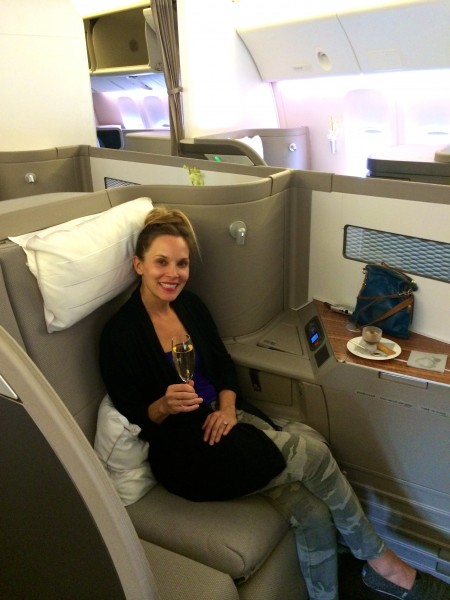 I am always so GRATEFUL when we get the fortunate opportunity to travel in such luxury.  It is something I will NEVER get use to and I will always feel incredibly thankful for.  I truly always feel like a little kid – taking pictures of everything, and making friends with the flight attendants.  I feel fairly confident that I embarrass Peter every time we board one of these flight with my childlike wonder.  But I mean, come one…they serve CAVIER…with champagne.  How can that not make a person giddy?

Peter recently told me that he worries that the airlines are eventually going to phase out these First Class award bookings which was just information I wasn’t willing to process. The miles game is a fun puzzle for Peter and he’s been able to fly over 1 million miles in luxury seats for free so I’m sure he’ll be motivated to keep figuring out these sorts of airline hacks. 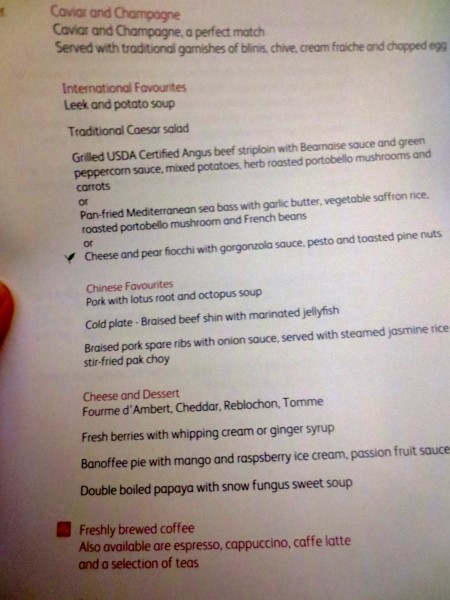 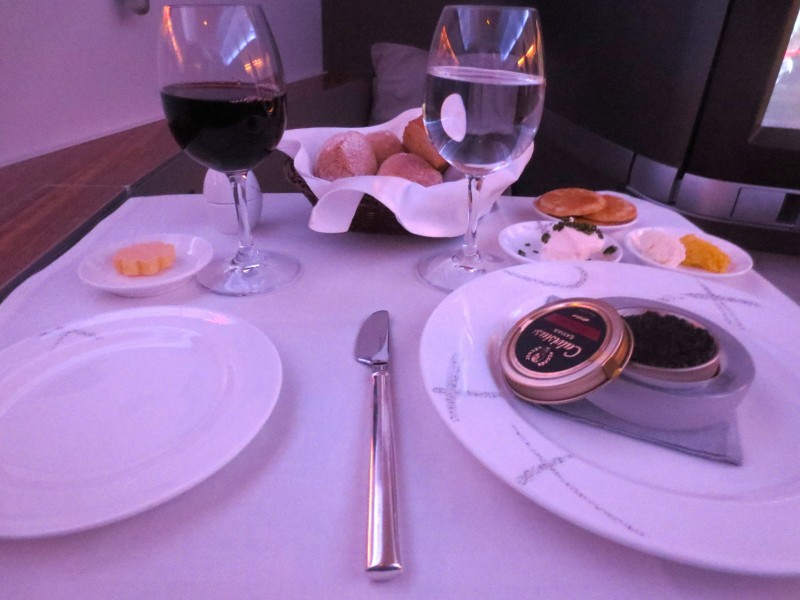 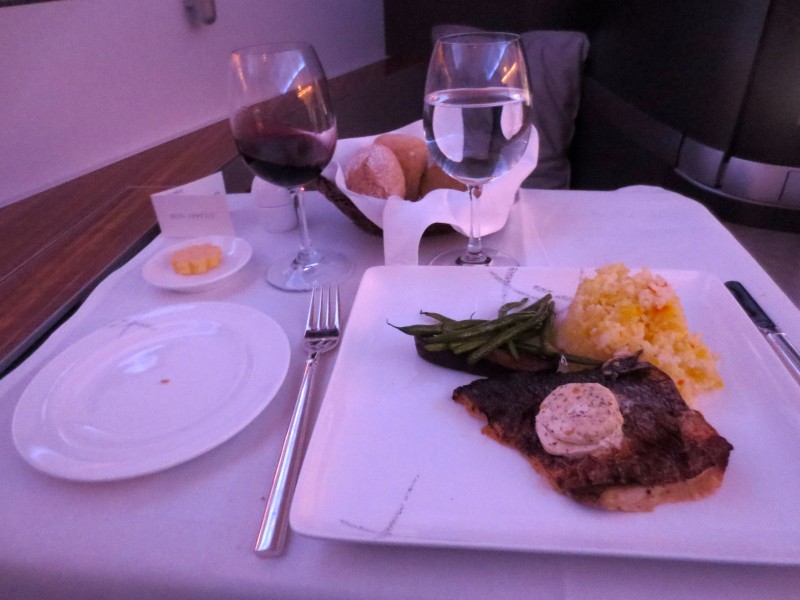 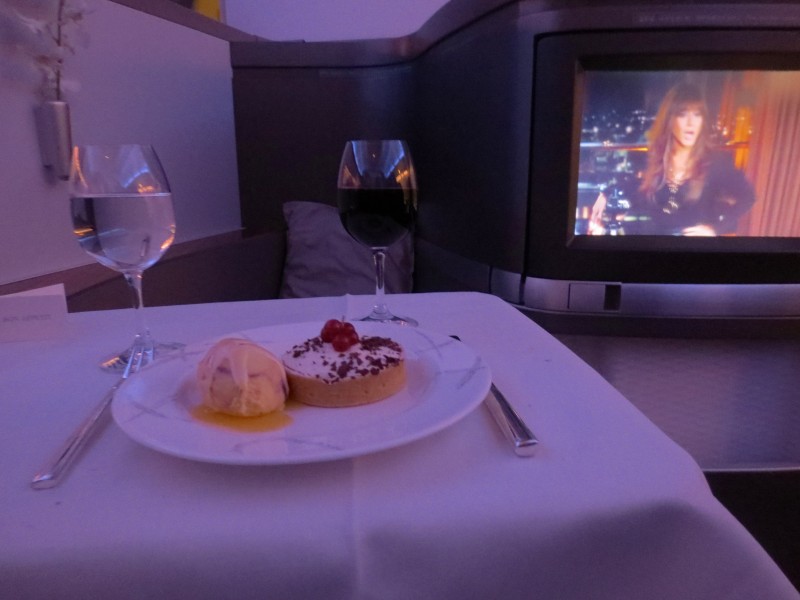 Because of the magic of airline travel and crossing the international dateline Peter and I experienced two sunrises and two sunsets on that particular Sunday.  That evening we strolled along the strand in Manhattan Beach, happy to be home, and grateful for an incredibly blessed first part of our year.  There really is something exceptional and special about California sunsets.  It always feels so good for the soul to be back home. 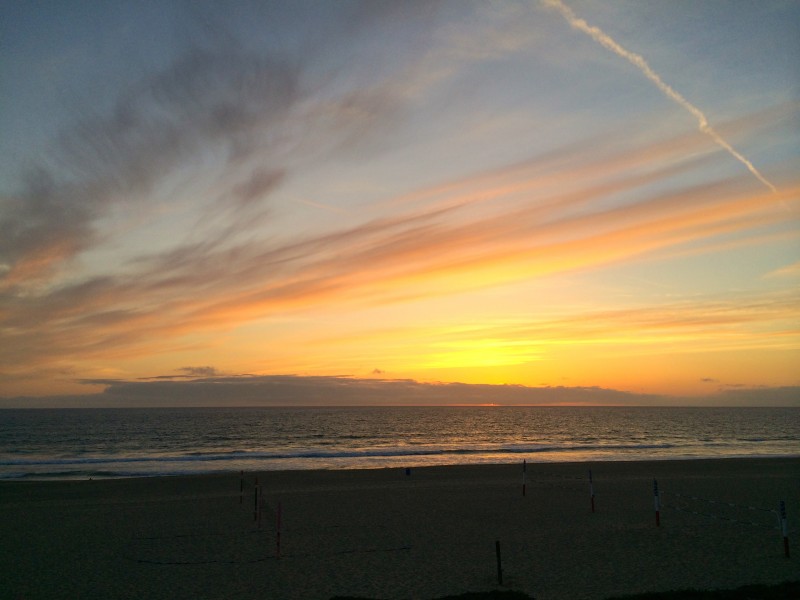