After a week in Zanizbar we were off to Victoria Falls in Zambia, a place that is so inspiring and God-like that many religious devotees journey to Victoria Falls as part of their missionary work in Africa.  Seeing is believing and thousands of people visit the falls each year to see a natural beauty that is so hard to imagine occurring without the help of the Divine.  It is believed across the globe that Victoria Falls is proof here on earth that the Creator exists.  If you are an atheist well then it’s a massive waterfall that cuts through two countries, Zambia and Zimbabwe.

The Scottish explorer and missionary David Livingstone was the first European to discover the falls on November 16th 1855.  He named the falls after his Queen – Victoria of England. The following is his account of seeing the falls:

“No one can imagine the beauty of the view from anything witnessed in England. It had never been seen before by European eyes; but scenes so lovely must have been gazed upon by angels in their flight.”

To get from Zanzibar to Zambia was no easy feat. We took a commuter jet from the island of Zanzibar to the Tanzanian capital of Dar es Salaam. We had a four hour layover in Dar es Salaam where we had to exit the airport and wait in the blazing curbside African heat until two hours before our departure. We finally boarded our flight from Dar es Salaam to Johannesburg, South Africa where we stayed overnight at an airport hotel.  What a fun place to have a sleep over though. It was the first time I’ve actually slept at a huge international airport. So many stores, restaurants and people bustling to and fro from every country imaginable. I felt like Tom Hanks in the movie Terminal.   Plus waking up in the morning and walking right to the check-in counters in a matter of minutes was pretty convenient. We finally boarded our final flight from Johannesburg to the city of Livingstone, Zambia.

For the visualizers, here’s a map of our journey: 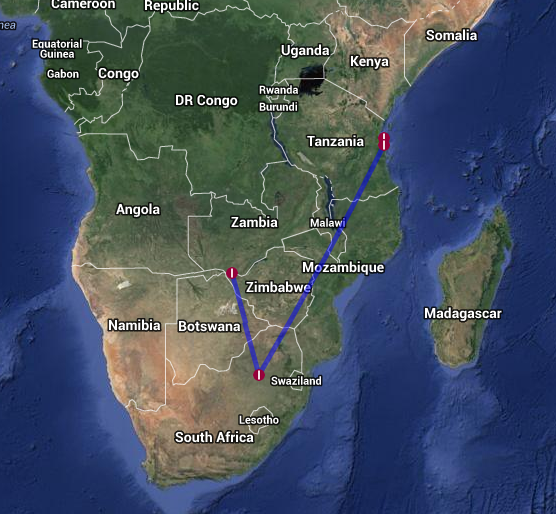 JNB airport already had the holiday decor which was a nice touch. 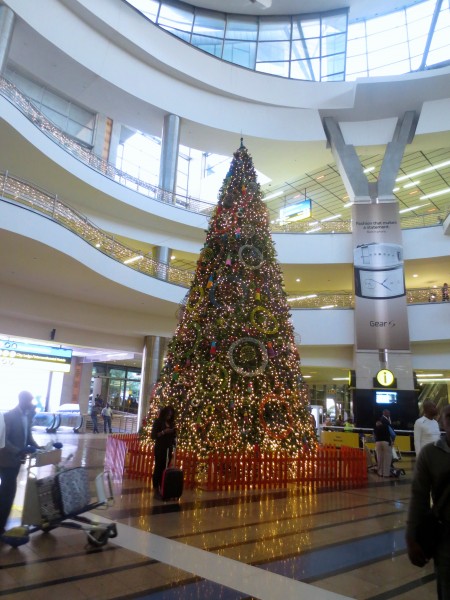 When we landed in Zambia we opted for the dual visa which would grant us access into Zimbabwe as well (it also allows a 24 hour stop in Botswana).  This visa is called the Kaza Visa. And while its a great money-saving dual visa, the day we arrived in Zambia was the first day it was released. The airport staff had no idea what they were doing. It took over 2 hours and 6 immigration staff to process the mere 60 people on our flight through the visa process. We were at the back of the line.

At one point Peter suggested I try to leave customs and immigration to let our hotel transfer know not to leave. I had to double-take. Was Peter really suggesting I exit immigration and customs without my passport and then try to get back in without my passport? Yes, yes he was. And why not. What else was I doing? In broken English and many hand gestures I relayed to the security guard the situation and I walked right through immigration, found our driver and explained the situation and without a hitch walked right back in to Peter without a problem.  There’s a saying in Africa, “This is Africa.” Its basically a catch-all and a shoulder shrug to things not operating in the accustomed way. We had nothing else to chalk this experience up to other than “this is Africa.”

We finally boarded our mini bus transfer at the airport. Peter wasn’t thrilled about the two-hour experience to get this visa as you can see in his expression. 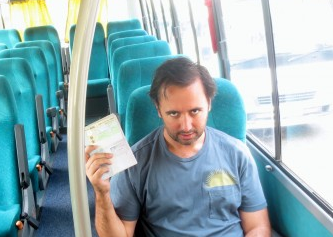 We checked into the Royal Livingstone Hotel, yet another recommendation from Tod that we were upholding. Upon arrival we were immediately ushered into a beautiful colonial sitting room where we were offered cold towels, drinks and handed over our passports. While they were processing our paperwork and waited for our keys we were treated to a hand massage.  Talk about service and making a good first impression!

The British colonized Zambia from 1899 – 1945 and this hotel is a throwback to those times. Its situated right on the Zambezi river which flows into Victoria Falls a mere 10 minute walk away. 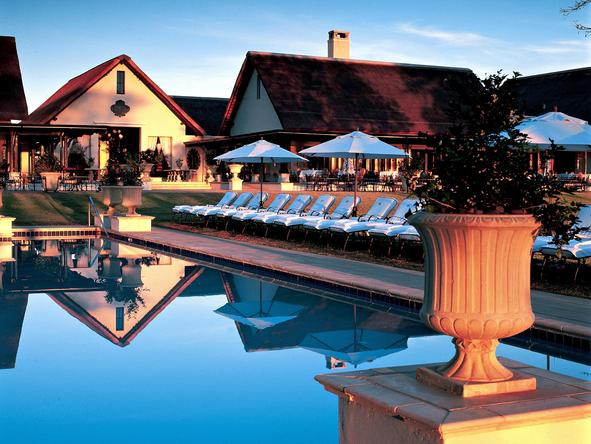 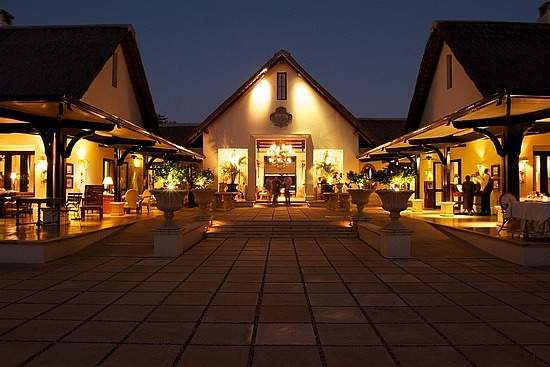 I am a fan of Chelsea Handler and this was one of the hotels she chronicled in her book about an African trip in Uganda Be Kidding Me.  I couldn’t help but think about the types of shenanigans her and her crew got into while they staying here.

The grounds have an initial wow factor with the Zambezi river, Zimbabwe at the opposite side of the river, a beautiful pool, lush green lawns and a constant thunder of the crashing Victoria Falls in the distance. 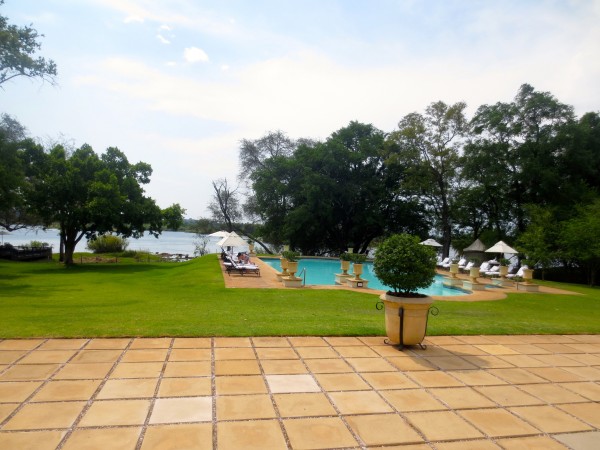 Staying at the Royal Livingstone offered a variety of amusements and wonders.  It’s located within a National Park meaning that wildlife such as zebras, giraffes and monkeys roam free on the grounds. 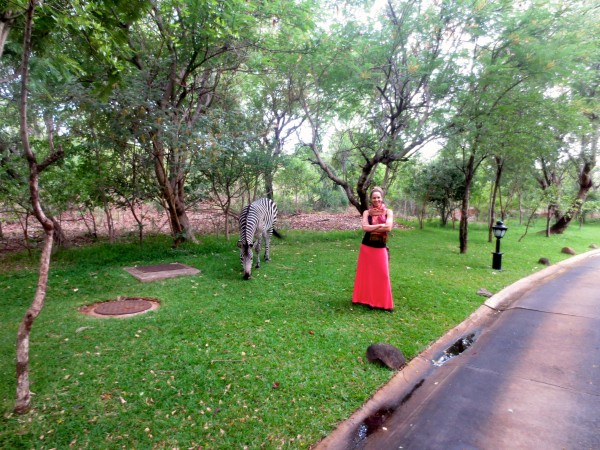 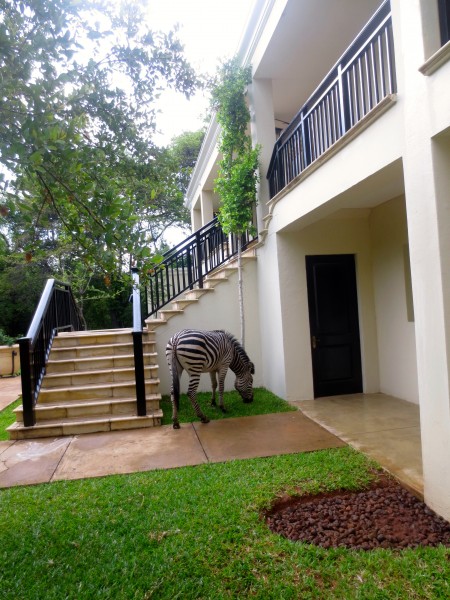 Our room had an outdoor patio covered by a tent where you could sit, eat a meal, and have a zebra run by or a group of monkeys roll around just steps away. 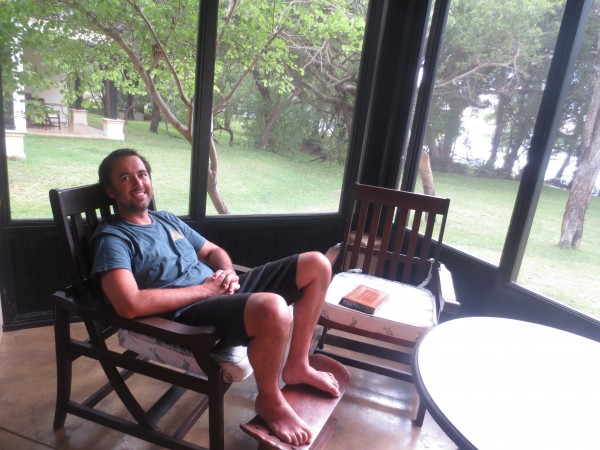 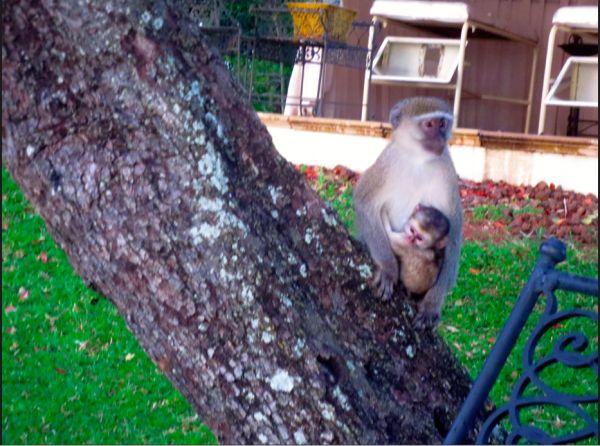 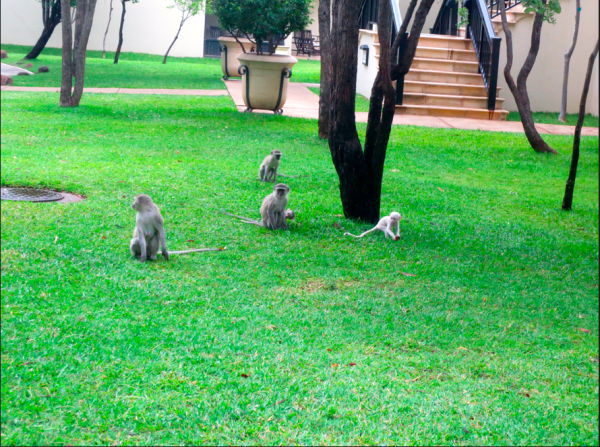 Is it just me or does that monkey on the right look like Gollum from Lord of the Rings? 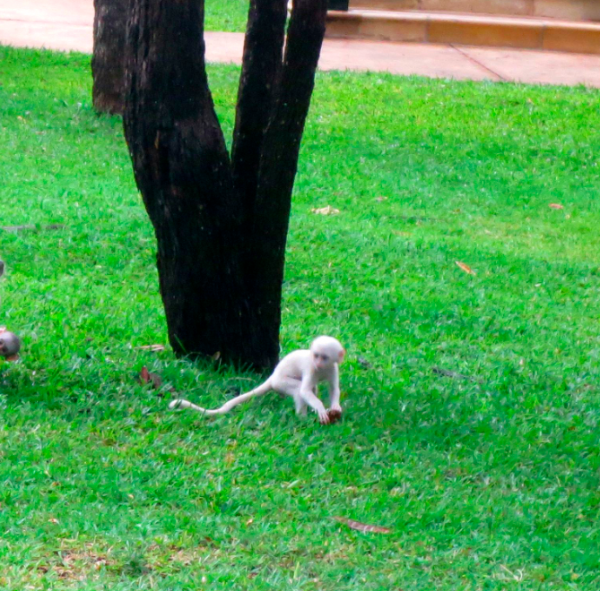 Another highlight was enjoying sundowners on the hotel’s deck overlooking the Zambezi River.  Below is the view of the deck. In the local dialect Victoria Falls is known as Mosi-o-tunya which translates to, “the smoke that thunders.” Such a descriptive and accurate way of describing the view. The smoke is in fact a constant stream of mist coming up from the crashing falls almost rising in cloud like formations. The thunder never stops. 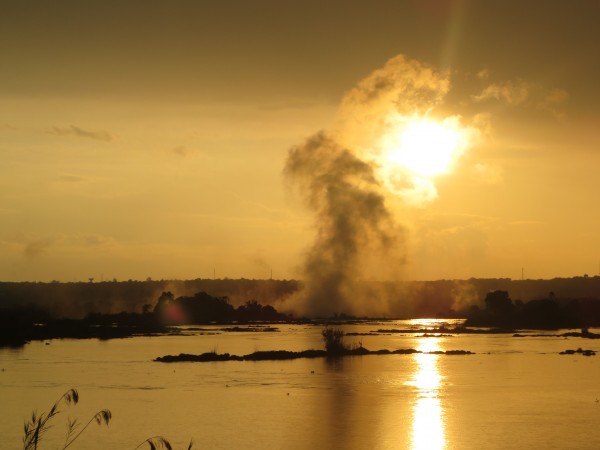 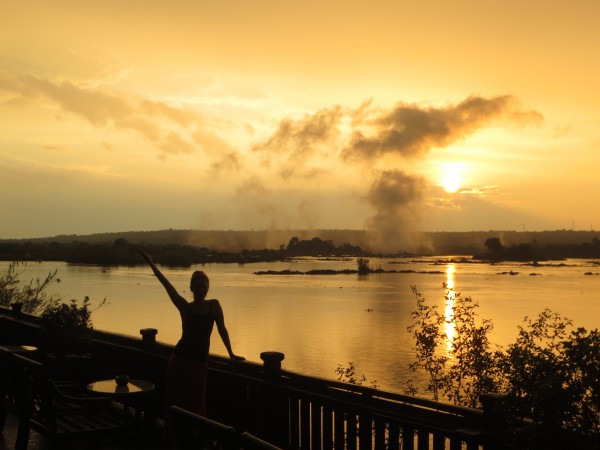 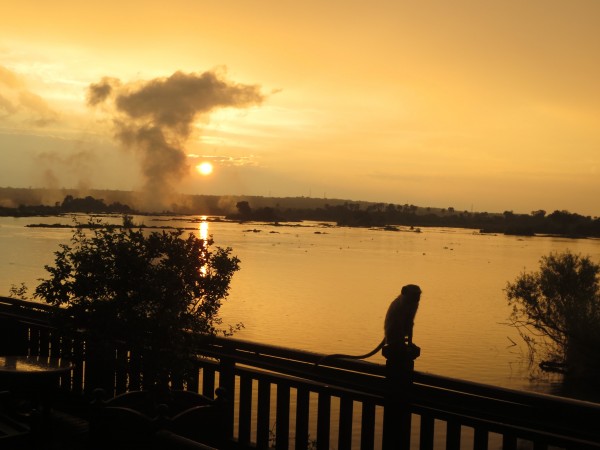 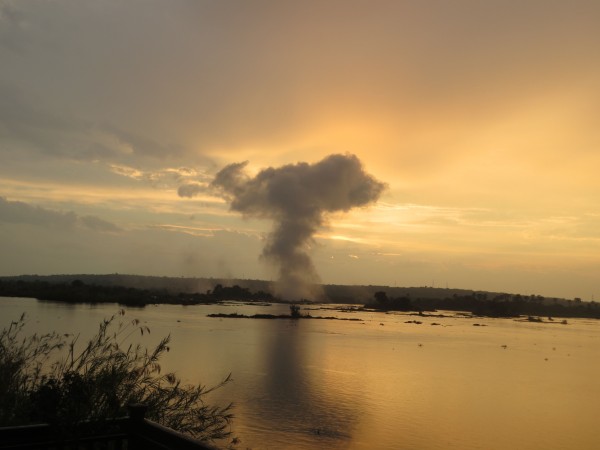 All these highlights wouldn’t add up to the main event though, Victoria Falls, just a short stroll away.  To be able to hop skip and a jump on over to a natural wonder was really remarkable.

Peter and I enjoyed the falls on two separate occasions.  On the first day we stayed on the Zambia side. On the second day we crossed the border and enjoyed the falls in Zimbabwe.  In order to get into Zimbabwe you simply walk up to a small building and hand over your passport. The guy at the desk doesn’t even look up as he stamps you out of Zambia and hands you a piece of paper with your passport and points to a gate. Once you get past the gate you’re essentially in “no mans land”, not stamped into any country as if you are flying in an international plane. To get into Zimbabwe you have to cross the mighty Zambezi River which you do by walking across the Victoria Falls bridge. In the middle of the bridge there are crazy enough people to engage in bungee-jumping. In no-mans land. In Africa. Which country would the death certificate read? We watched a Russian test his fate as we crossed into Zimbabwe. 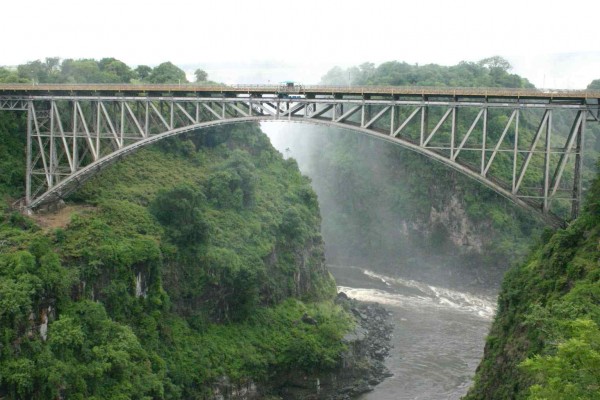 When Peter and I visited Victoria Falls it was low season. Therefore, the falls weren’t out in all their glory.  The water level was low so there were vast areas that were completely dry, void of any falls. Instead we saw rocky landscape that usually is taking a beating from pounding water falling which is a geological treat in itself (I just used the phrase geological treat. Nerd alert).  But in all seriousness, it was somewhat disappointing to see the falls without the falls, so to speak. You come all this way and you want to see the best the fall’s have to offer. We both made a pact that we’d come back, maybe someday with kids, and go in high season.

Here are pictures of the falls from the Zambia side. In high season, the entire rocky facade is falling water! 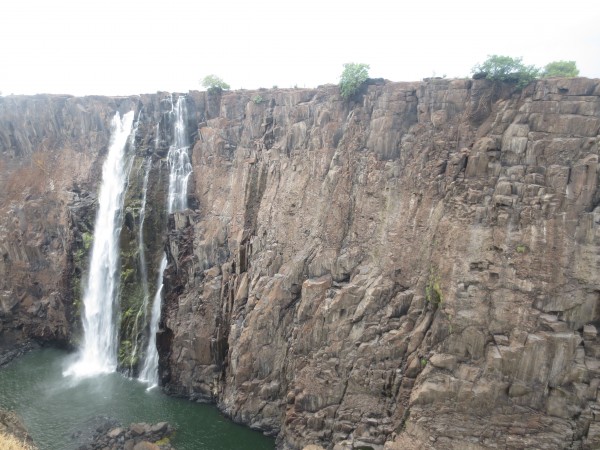 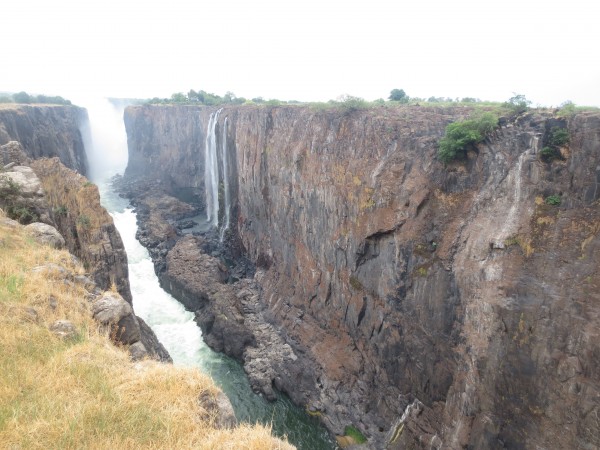 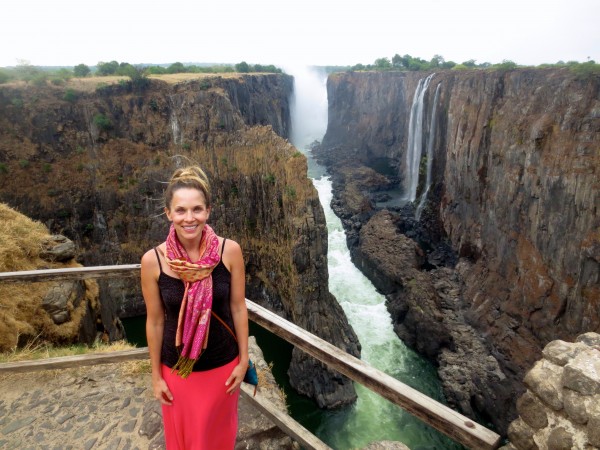 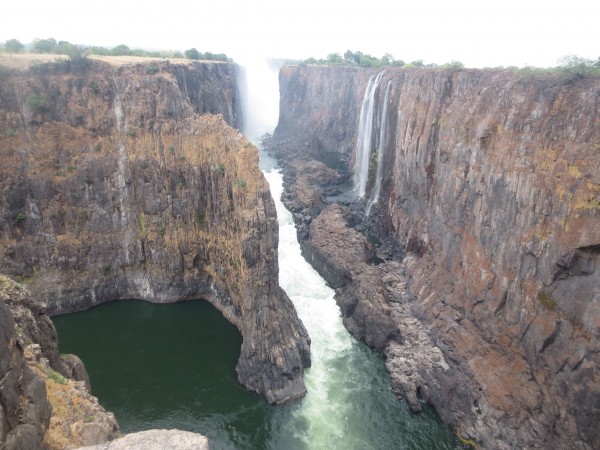 In the high season you can expect to see this. 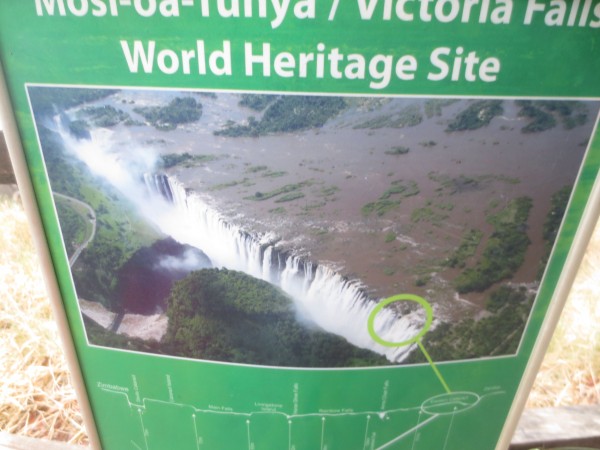 These are pictures from the Zimbabwe side which we both preferred. 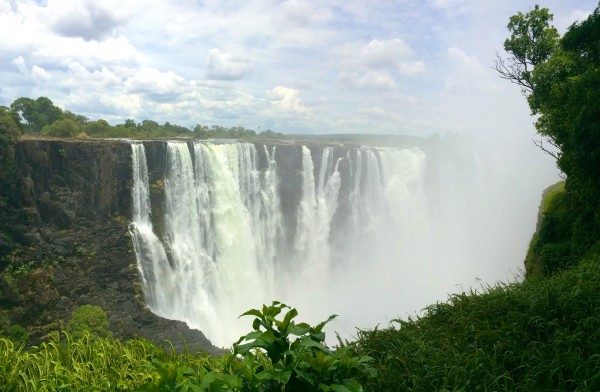 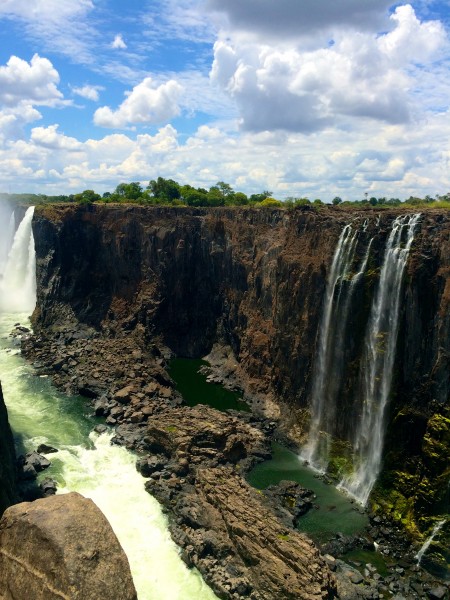 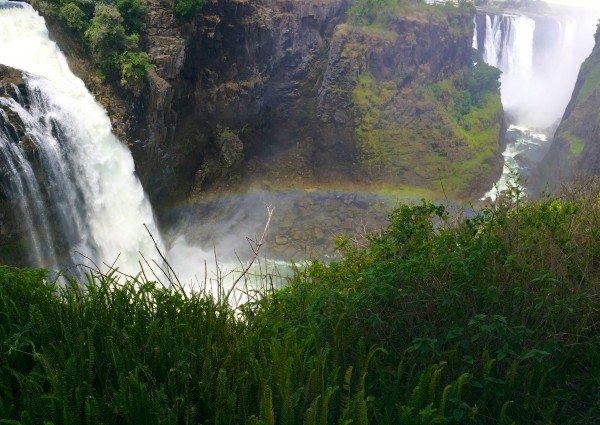 While in Zimbabwe Peter was very excited to get his hands on some Zimbabwe currency.  He has a currency collection from every country visited and this was a highlight currency for him to obtain. The Zimbabwe currency has been obsolete since 2009 due to hyper-inflation where the currency rose over 5 billion percent. Yes, billion. So as the currency inflated, the government decided not to fix the economic problems but just print larger and larger bills, the highest being a 100 billion dollar note which is now the equivalent of $0.95. There are stories of people bringing trash-bags full of money to shops to buy a loaf of bread. It was also explained that some of the lower domination bills were so valueless that it was literally cheaper to use Zim currency to wipe yourself after using the toilet than using a sheet of TP.  So locals decided to save money by using money to wipe themselves.  True Story!

The country is now accepting 8 different currencies with most shops marking prices in USD.  Although only notes are accepted and not coins, change is sometimes given in sweet treats, airtime mobile minutes, and condoms. The Zim dollar is no longer accepted but Peter had read that you can buy them as souvenirs. It only took one inquiry for him to get his hands on a 20 billion dollar note. Ever the hustlers, they charged $5 for the worthless piece of paper. But for the moment, we became unrecognized billionaires. 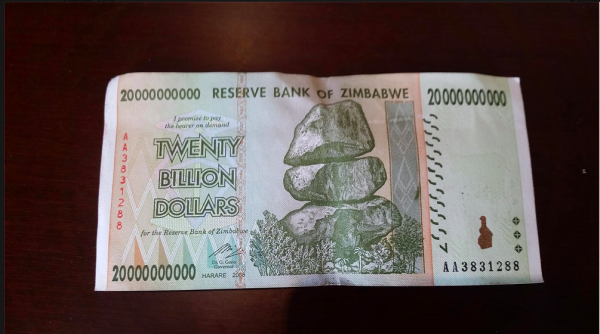 After our visit to the falls on the Zimbabwe side we retraced out steps back to the Zambia border with no additional visa charges since we had spent all that time at the airport getting a dual Kaza Visa.  We walked back to the Royal Livingstone where we saw a zebra with her baby.  Naturally, I tried to pose with them. This did not make the Zebra mother happy. She cocked back her hind legs and thrusted them forward in a clear attempt to take me out. With quick instinct I ran down the path to safety.  Peter followed me while shaking his head at my antics. Note to self: beware of zebras.

Next up – safaris in Botswana.

Thanks for following us on our missionary tour of “the smoke that thunders.” 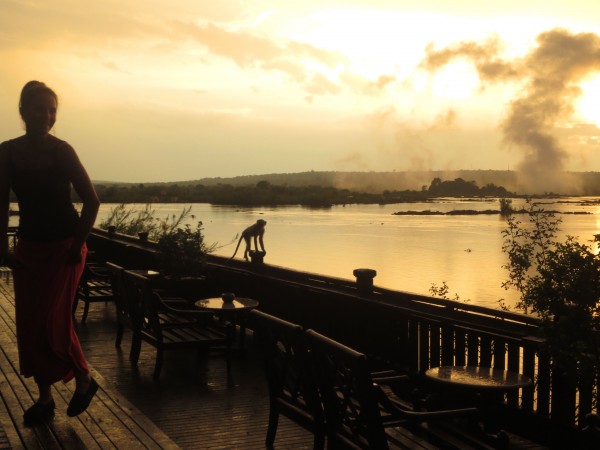