The party’s over in Vang Vieng, Laos

We left Luang Prabang in Northern Laos and were heading South to the city of Vang Vieng. Peter rented a truck, thrilled about the opportunity to cruise through the mountainous terrain in Northern Laos. “We’re driving through the mountain ranges of the Himalayas,” he exclaimed as we took off on the arduous 7 hour journey by way of broken roads, hairpin turns, switchbacks and plenty of single lane streets for two-way traffic. Buckle up. It was a wild ride. 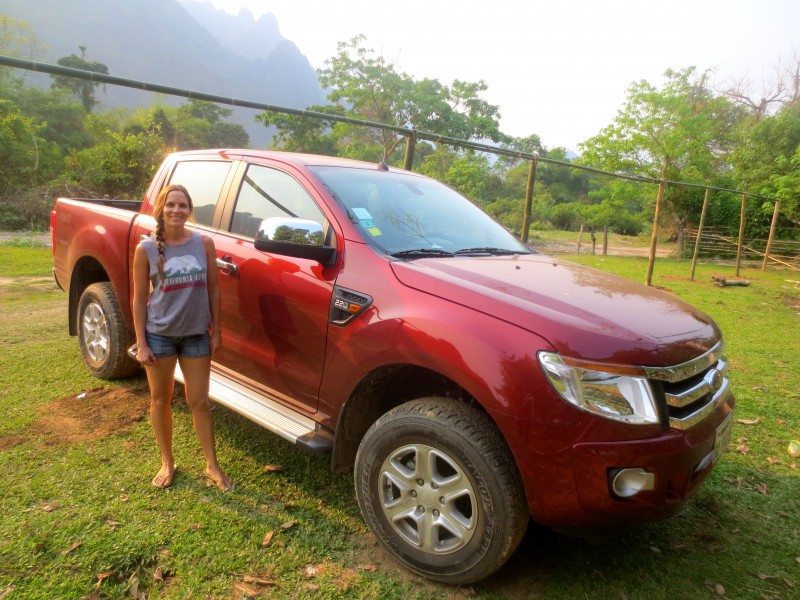 Peter really enjoys a good road trip and the scarier the road for him to conquer, the better.  We had not experienced a more challenging road since Positano.

I have to hand it to him though: he is a cautious, excellent and safe driver.  I am sure I just made his day with that acknowledgment.

The roads might be in rough shape, but the views are anything but.  Getting out of city life and traveling through small Laos villages opened our eyes to all kinds of untouched beauty. 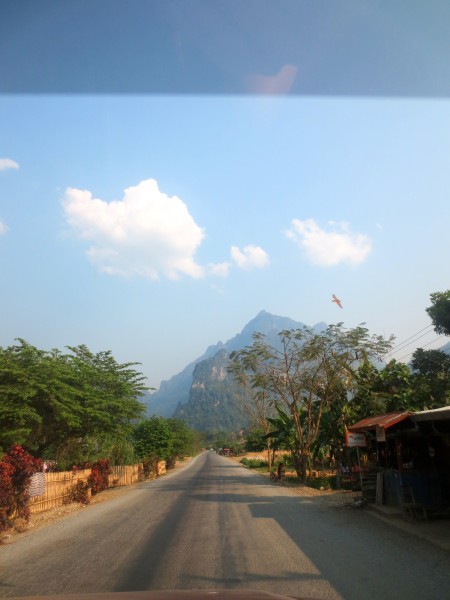 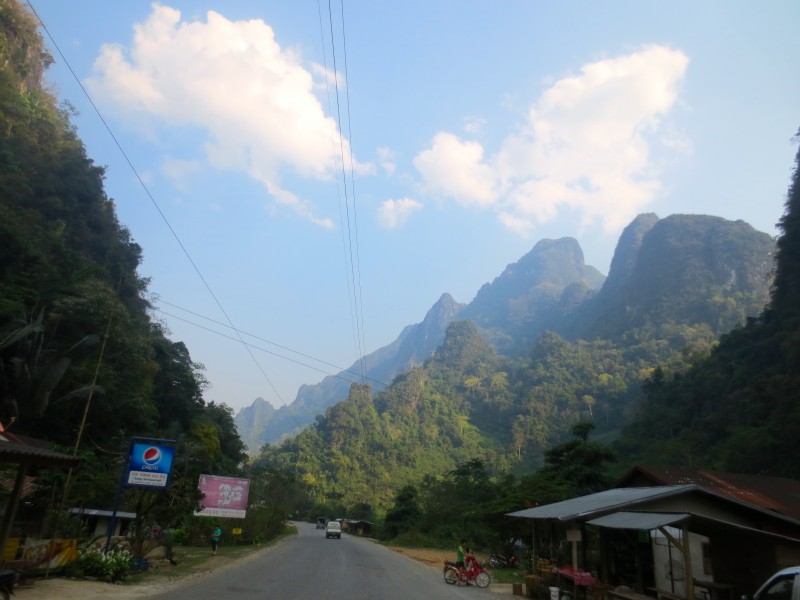 We also came across some lovely people when we stopped for a mid-trip snack.

We pulled over to a mini mart where a young woman was running the shop.  As Peter and I each picked out Mama Noodles (the best cup-of-noodles ever) her children curiously inspected us.  We picked a seat outside where we waited for our food and played with the kids who decided we were ok.  We visited with the woman with smiles and broken English/Thai/Lao language.

After a nice 30 minute road-trip break, we asked for the bill and the woman quoted us the US equivalent of $1.60. Shocked at the low-price, Peter gave her $2 and told her to keep the change in which she refused and insisted that we not overpay. I am always amazed by the honesty and good nature of villagers who treat tourists fairly. It happened to us in this instance in Laos and when we had a flat-tire in El Nido, Philippines. I suppose these rural villagers have yet to be spoiled by greed. Ironically, in both El Nido and the tourist areas of Laos, the locals over-charge and scam the tourists with reckless abandon.  Needless to say, it was a very heartfelt gesture to be treated equally by the Laotian villagers.

Hours later we arrived in Vang Viene and found our way to our hotel, Vieng Tara Villa.

The hotel is regarded for stunning views of rice paddies dwarfed by a mountain backdrop.  However, the service…highly lacking.  In fact the service all over Vang Vieng left little to be desired.  Where was the enormous smiles that make my heart sing? Where was the over the top cheer that made me want hug everyone? Far from Vang Vieng.

My thoughts are that the friendly demeanors of locals went out the window somewhere around the time the city felt like they needed to put up these signs for backpackers. 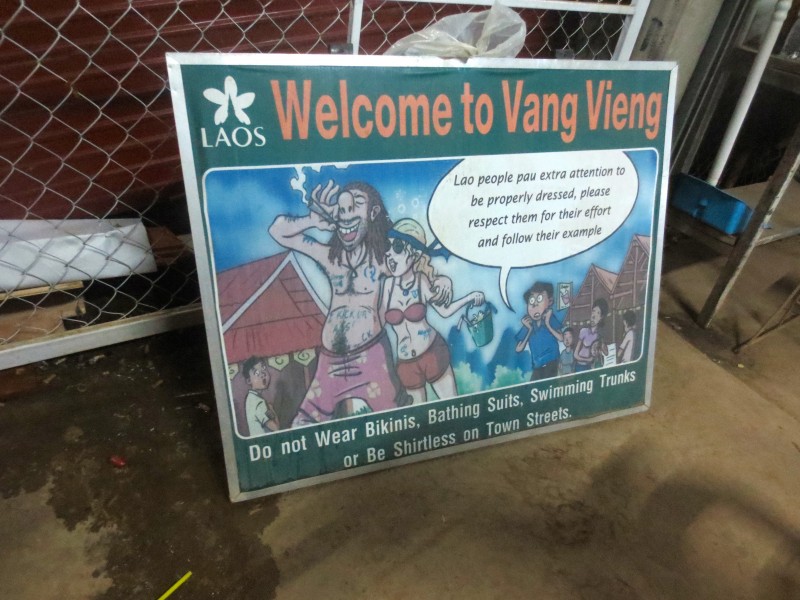 Vang Vieng was once party central for backpackers traveling the SouthEast Asia circuit.

Tourists would come in droves for a tubing party that took them down the Nam Song River.  The banks of the river were lined with miles of bars, rope swings, zip lines, and decks used for diving.

If this sounds dangerous, it’s because it was: deathly dangerous.  In 2011 it was reported that 27 people died (although that figure is most likely higher) while partying here from drowning or diving into the rocky waters head first.  When I was traveling in 2012 in Thailand, I even heard about this legendary and dangerous party.  If your city has a reputation of a party destination where people die, I would think something has to eventually change. Which is exactly what happened. In 2012 the government came in a shut the party down.

So three years later what is left over seems to be some disgruntled locals.  A peaceful and serene village town had been overrun by drunk young tourists in a very conservative country. This destroyed the tranquil and simple way of life. Villagers realized there was profit in this hedonism and even young villagers were influenced by drugs and theft, imported by the backpackers. Now the party is gone and what is left is a severe hangover that the people are still trying to recover from.

So when they weren’t nice to us foreigners, I kinda got it. We remind and resemble the very people that ignored their culture, polluted their waters, poorly influenced their youth and disrespected their conservative values.

Back to our hotel.  The views were truly remarkable. The rooms were on stilts above rice paddies.

Here we are checking in. 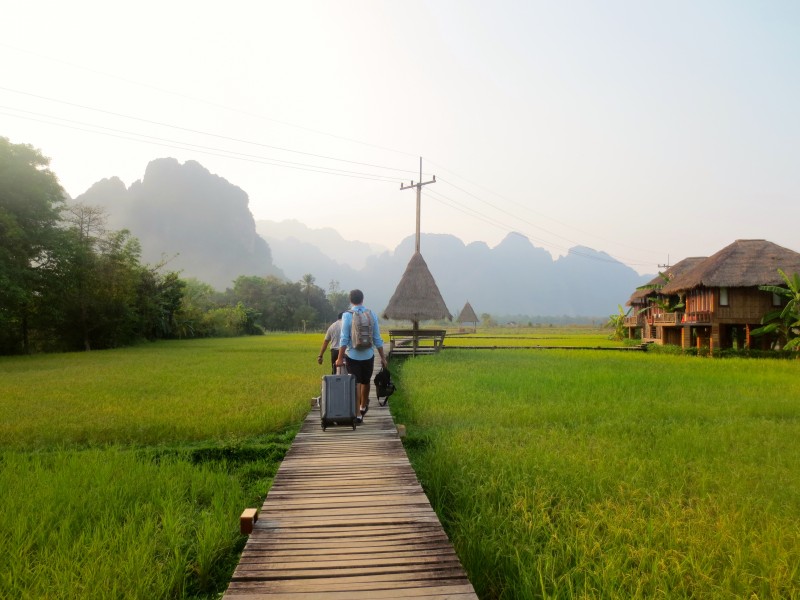 Our Villa for the next couple of nights. 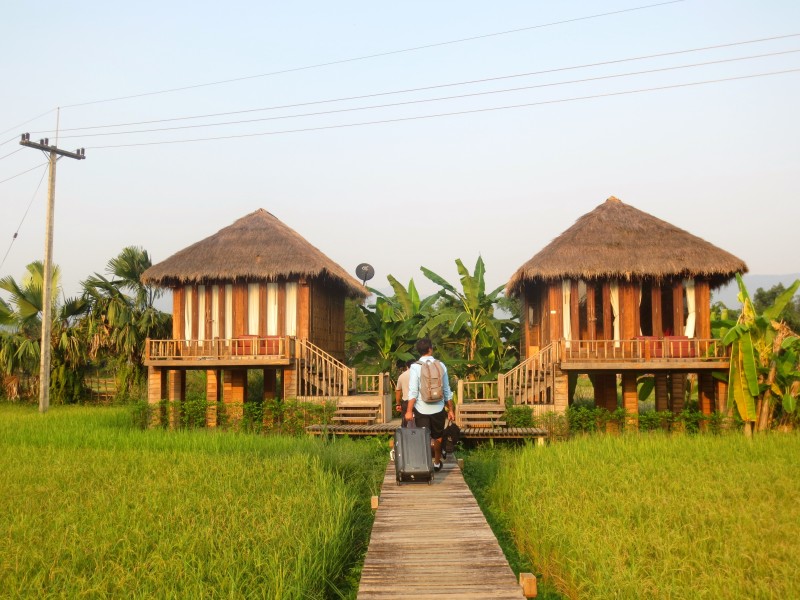 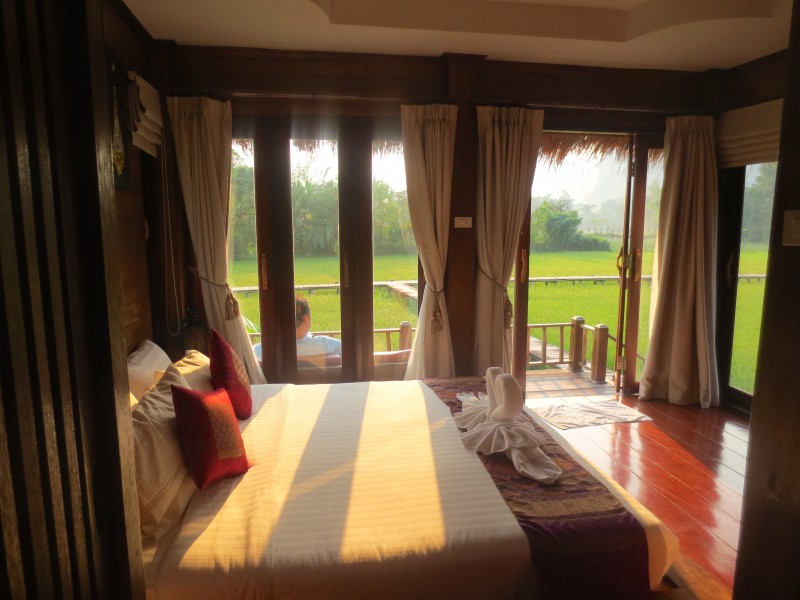 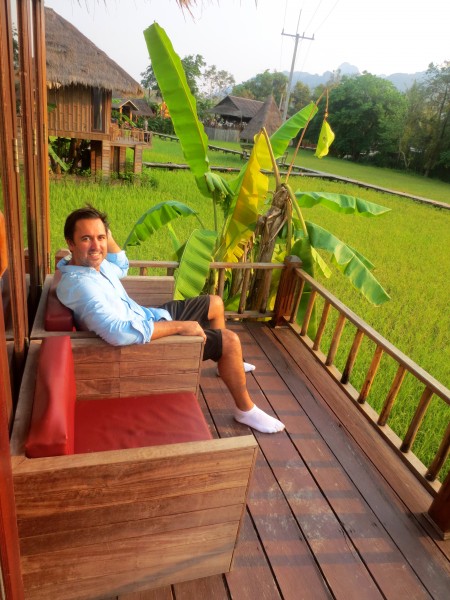 We figured there wasn’t a better spot to watch the sunset so we took a seat on our porch and gazed out into the horizon. 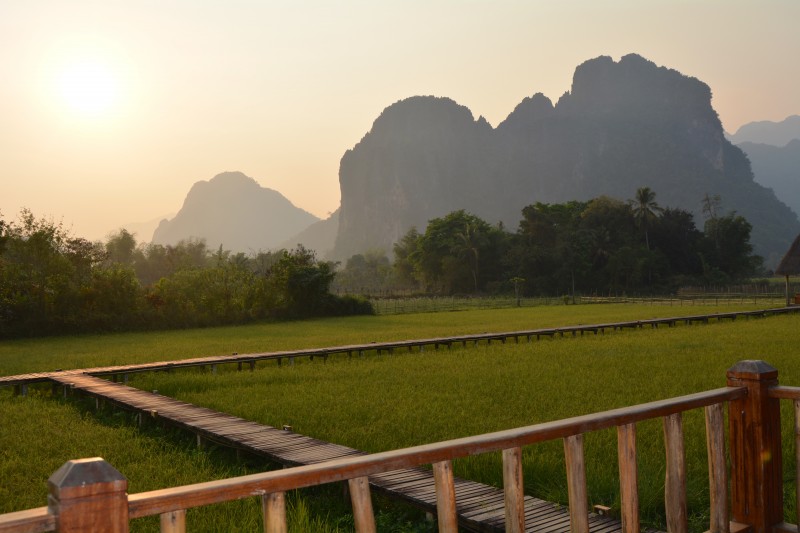 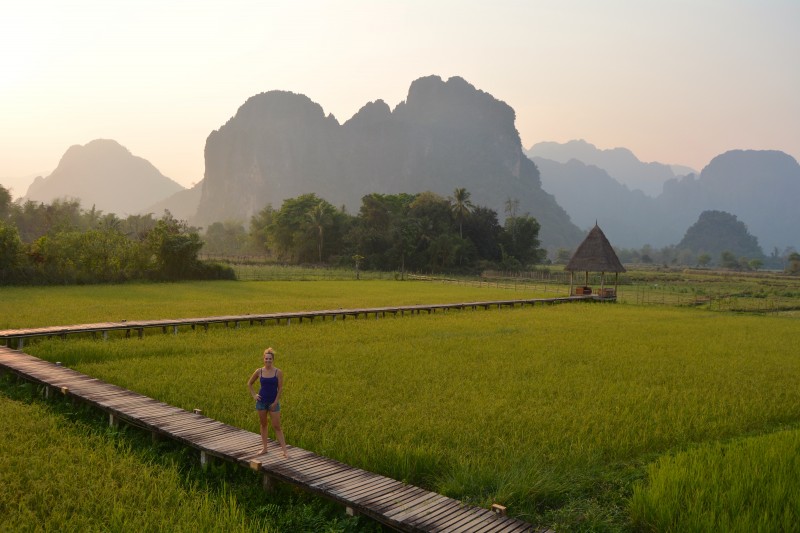 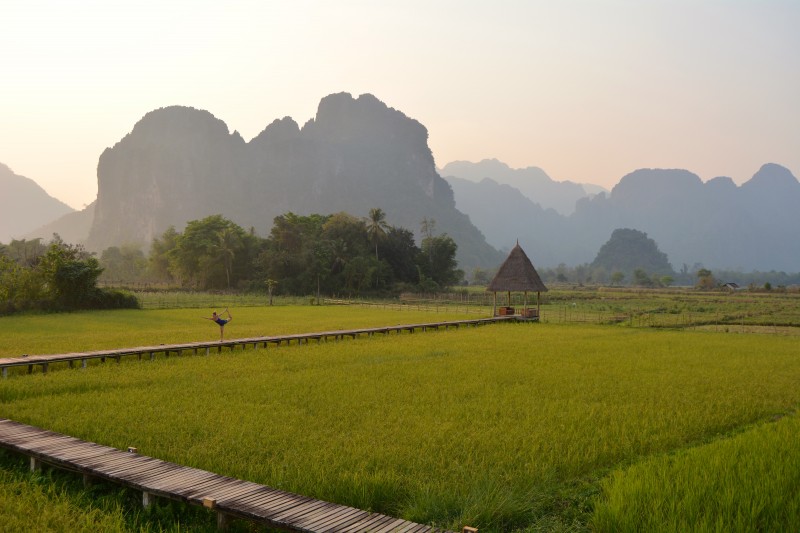 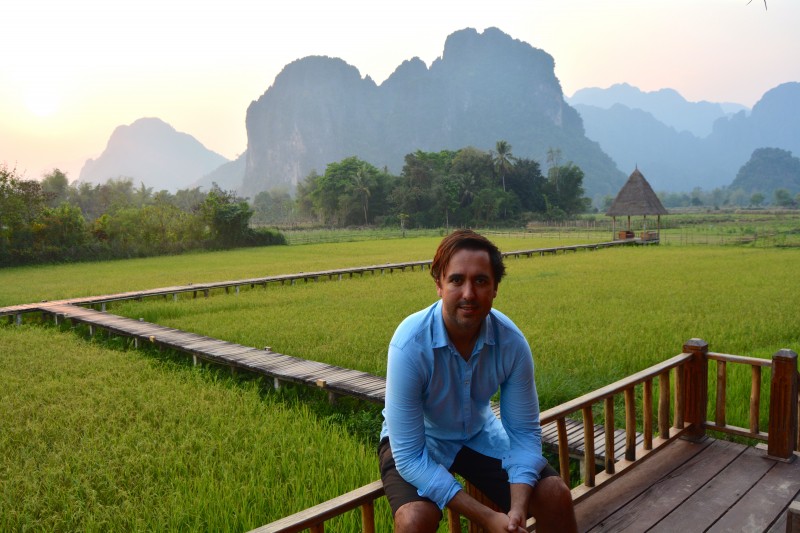 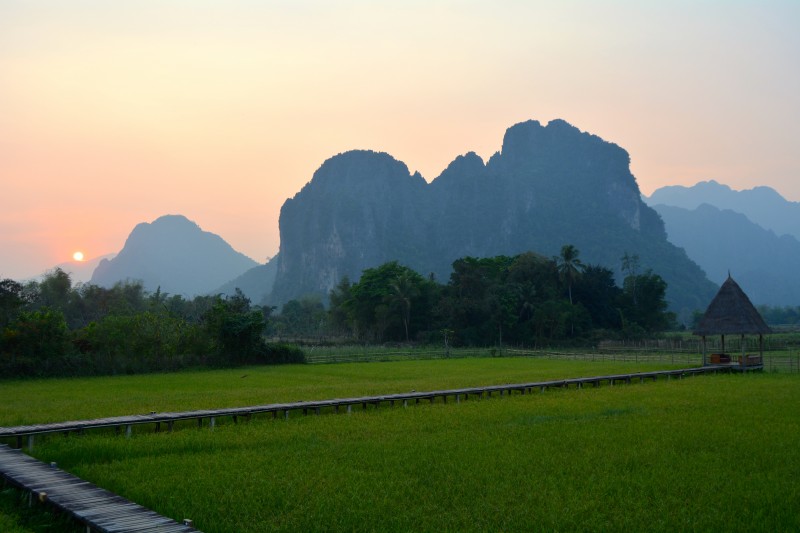 After sunset we sauntered into town in search for dinner.  We stumbled upon Banana Restaurant where we experienced ghosts of tubing days with the sitcom “Friends” and “Family Guy” being played on the TV’s.  The service was slightly above awful.  Food just ok.

The next day was our only full day in Vang Vieng so we set off to explore the various outdoor activities and sites.

Our big activity for the day was set around cave tubing.  With my claustrophobia, I’m not sure why I suggested this outing.

Getting there though was half the fun.

We had to find our way by a right turn off on an unmarked road 10 miles outside of Vang Vieng. Then we had to park and navigate by foot through a small Laotian village over a hill and a bridge until we came across a tiny cave opening at the foot of an enormous limestone cliff.  While walking around these villages we got a sense of what life use to be like in the center of Vang Vieng before it was overrun.  Friendly villagers, children playing, and all in a quiet a serene setting. 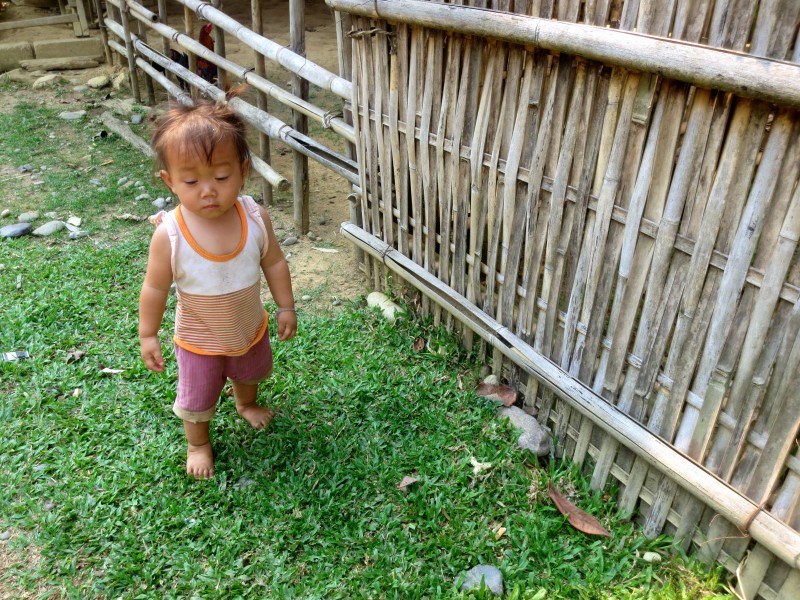 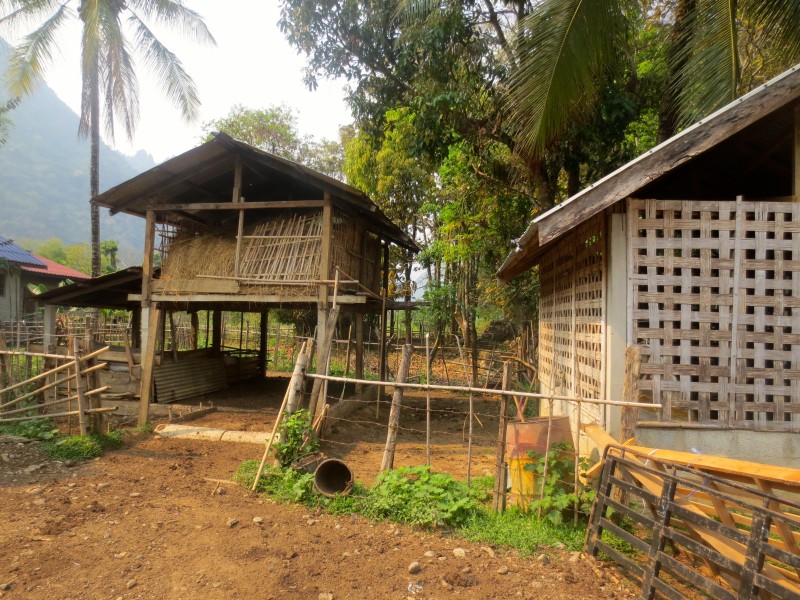 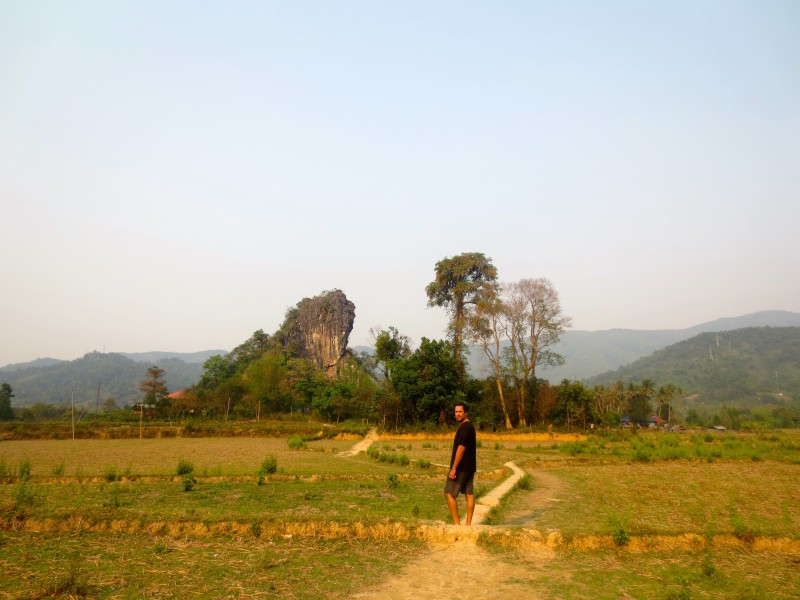 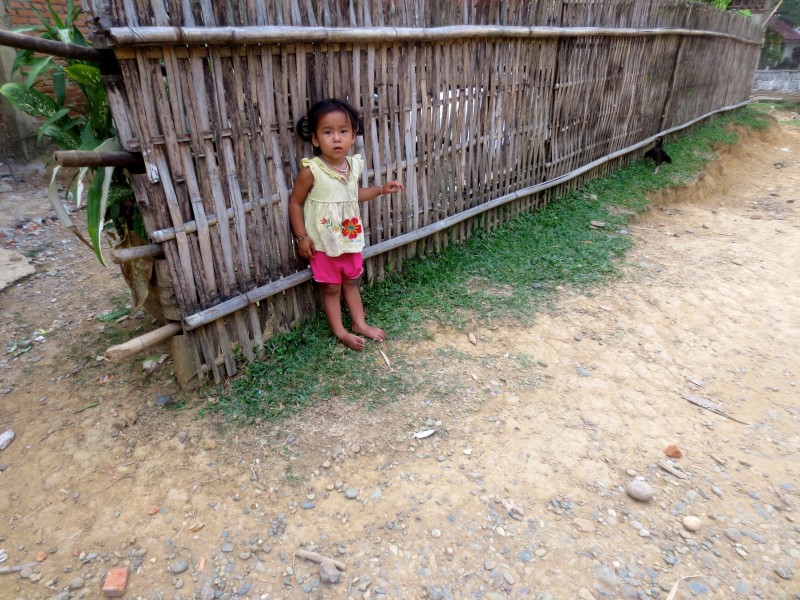 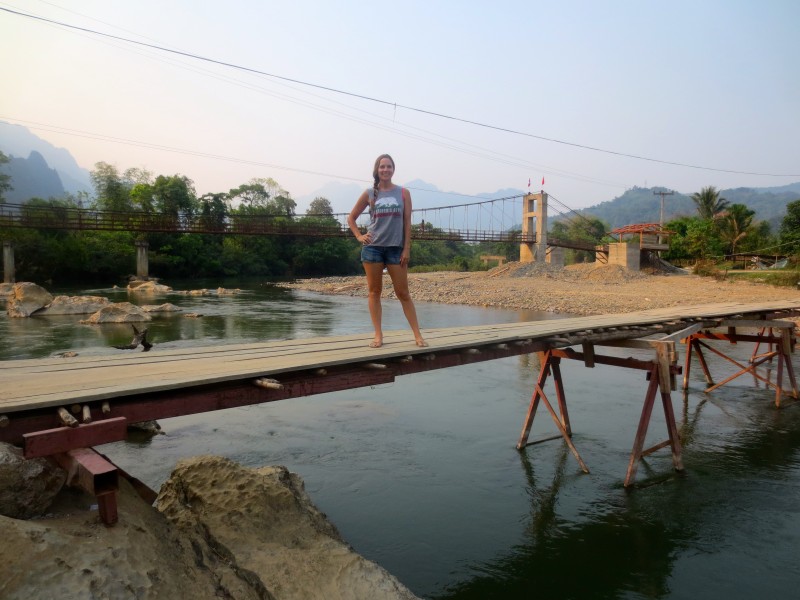 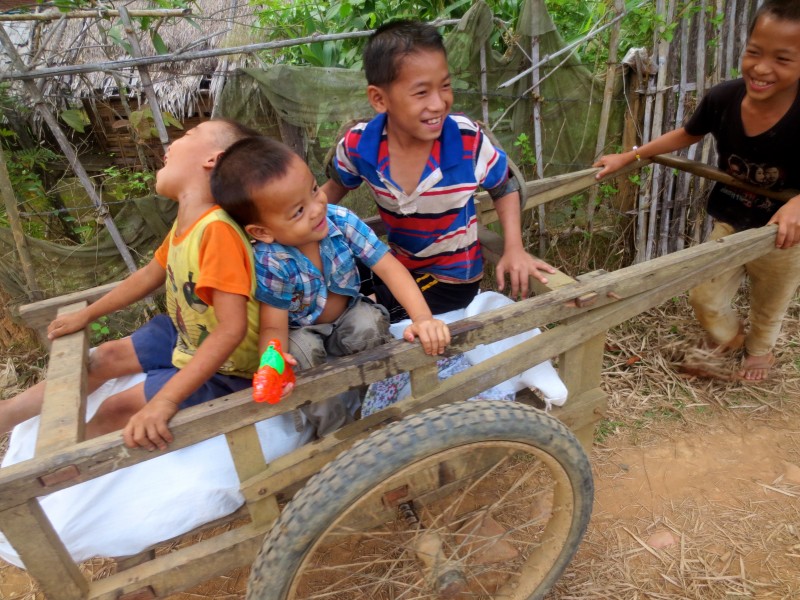 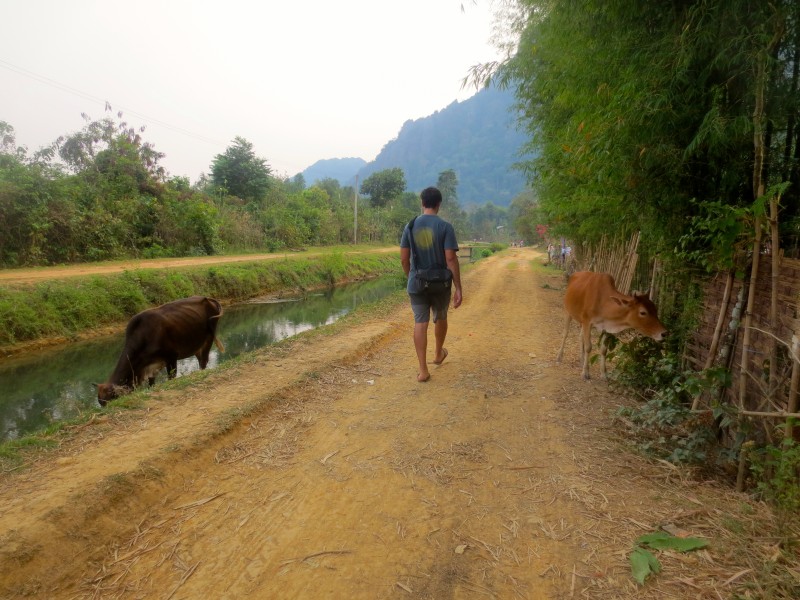 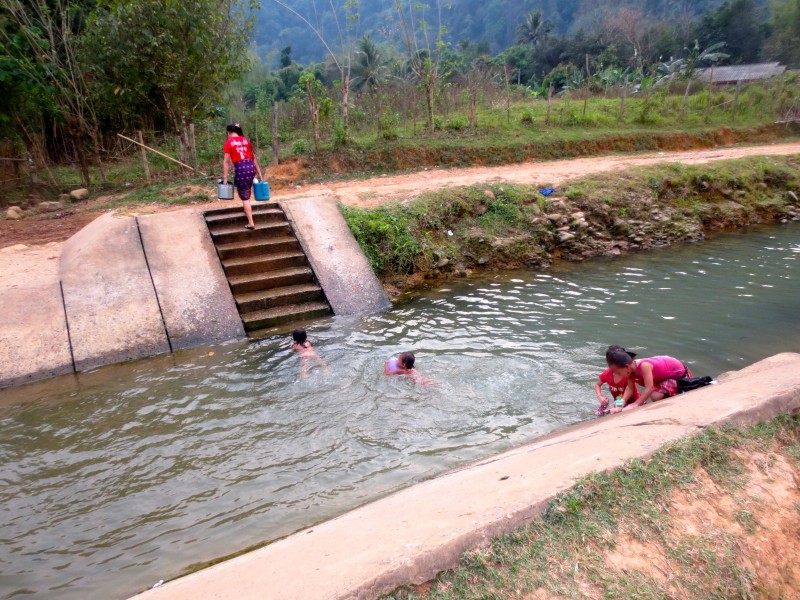 When we arrived to the cave there was a tour-group of about 40 Korean tourists getting ready to explore the cave.  Full blown anxiety started to set in at the thought of being trapped in a cave with that many loud travelers. 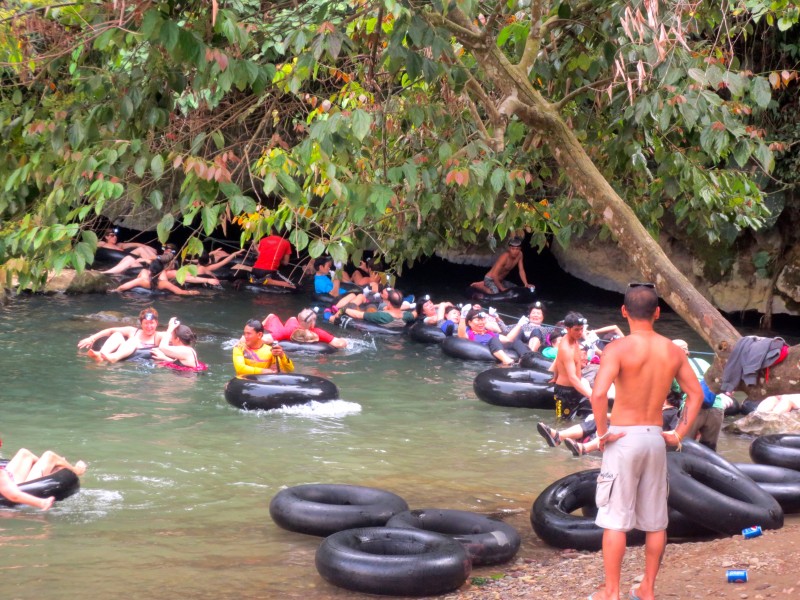 Peter sensing my anxiety attack, suggested we wait until they go in and come back out.  That sounded perfect.  Luckily for us, after 20 minutes of waiting the tour-group had exited the cave and nobody else had come. We had the entire cave to ourselves.

Peter and I jumped in our tubes, turned on our head-lamps and grabbed the rope that would guide us deep into the pitch black cave.

At the beginning of the cave I felt ok because you could still see the opening, but once that was out of eye sight, I started to panic.

I asked Peter a series of questions in an attempt to calm myself:

“What if the opening of the cave closes up?”
What if there is an earthquake and we get crushed in here?”
“Do you think this is safe?”
“What if our headlamp’s battery dies.”

Peter patiently entertained and answered all my questions while holding my hand.  His confidence and physical touch worked because within a few minutes I felt pretty good.

Once again, the cave is deep. Without more than 3 feet of clearance between the water and the ceiling in some spots and complete darkness, its certainly cramped. You pull yourself along ropes that are connected to various parts of the cave that extend deep into the abyss. We pulled ourselves to the end of the cave which took about 20 minutes of pulling.

Peter would sometimes instruct us to turn off our headlamps. I’ve never experienced such darkness with my eyes wide open.

I faced my fear of claustrophobia although it wasn’t until we left the cave about 30 minutes later that I felt happy about my accomplishment. There was still a part of me that wanted to be out of the cave the entire time I was in there.   That’s the funny thing about fears.  Give me a plane to jump out or a bridge to bungee off of, no problem.  Trap me in an elevator and I feel like the whole world is collapsing on me. 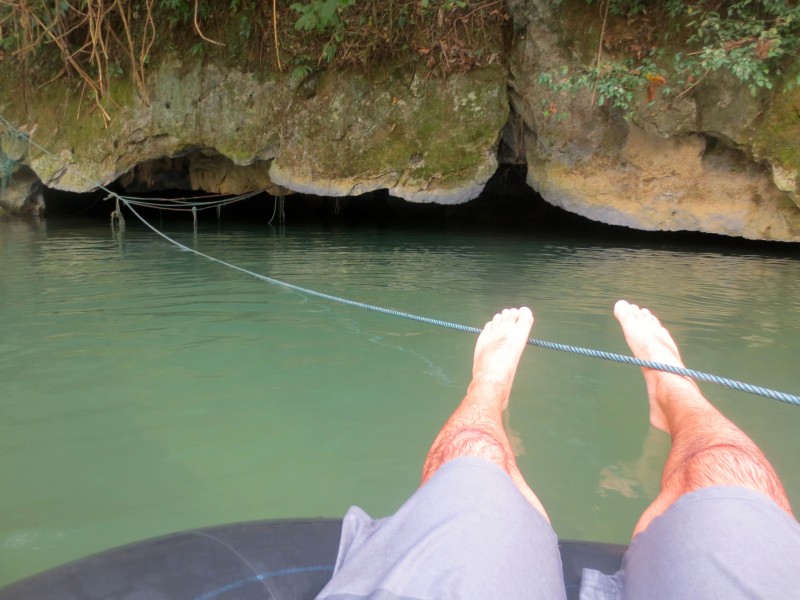 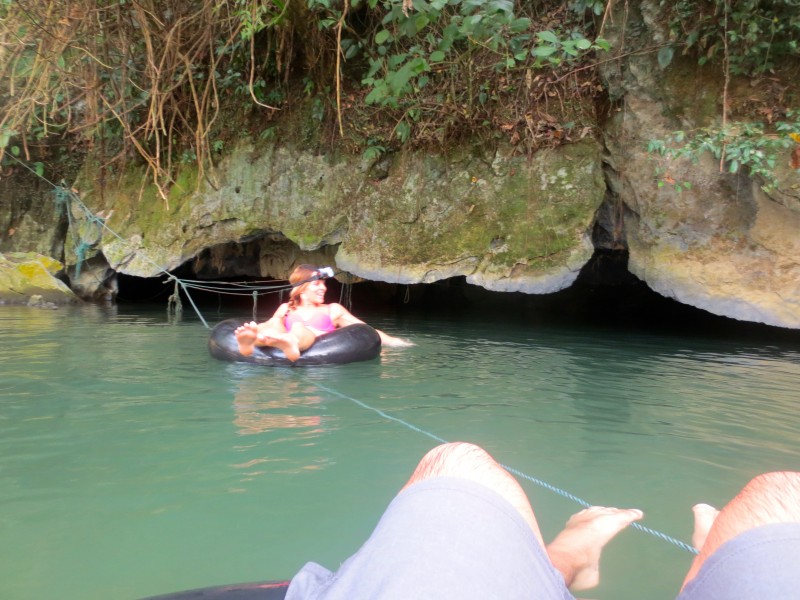 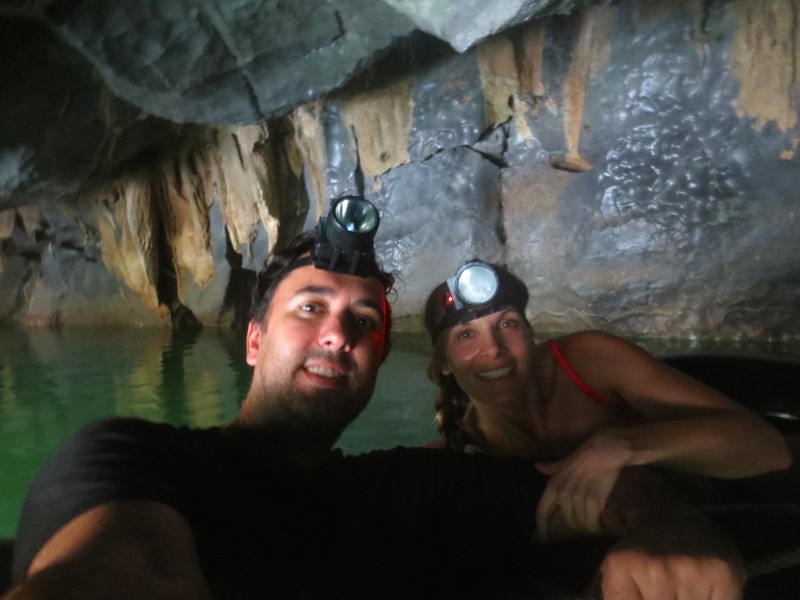 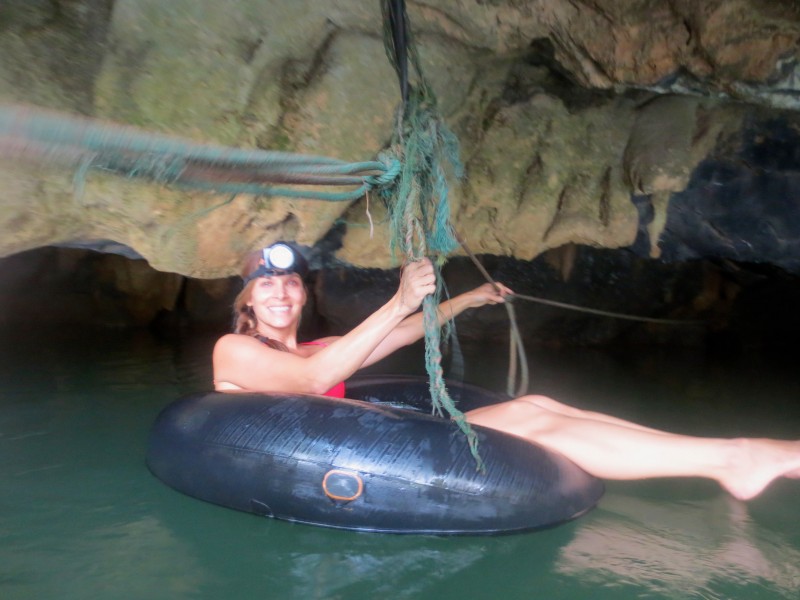 Afterwords, feeling pretty good about myself I walked back though the village with a bit of swagger. 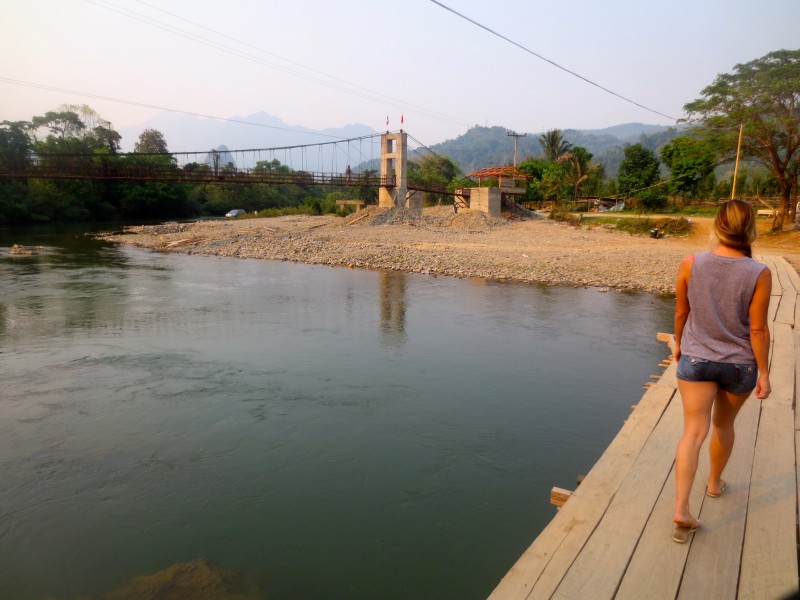 After a day of exploring and conquering my fears we drove back to our rice paddy abode and got ready to head out for dinner.  We did our typical cuisine choice when unsure of the best option: pizza.  A highly marked restaurant, Pizza Luka, was where we ended up.  Per usual, going for pizza was a good idea (thank you Italy). The cozy atmosphere helped too.  This was another take on backyard dining with tables set up on the lawn of the owners (a foreigner) home. He had built a wood-fired oven in the yard and decided to sell pizzas to tourists.  Sometimes a simple concept in a simple picnic table in a simple yard is an absolute winning combination.

That night back at our room as I was getting ready for bed when an enormous cockroach crawled out of my toiletry bag and on to my hand.  I let out a blood curling scream that brought Peter into the bathroom in a second flat in a state of panic.  He probably thought he was going to walk in and see someone holding a knife over my head.  After I explained to him about the cockroach, he shook his head at me and killed the cockroach.

Two fears faced that day, only one faced with grace and dignity.

The next morning we would continue our road trip with a bumpy ride to the capitol city of Laos, Vientiane.

Here’s to facing fears, but only one per day.