Seattle and Dave Matthews at the Gorge

Peter and I returned to the states where we stayed with my in-laws for a few days and then once again we were back on a plane.  WE ARE nutty.  We had just got off a plane where we had flown almost 17 hours from Abu Dhabi to LAX and here we were already back at it.  However, this time we were keeping it stateside and heading to Seattle, Peter’s college home town and where he lived for six years.

In the below picture we are at the Orange County airport both pondering what day and time zone we were on while simultaneously suffering from sever jet lag. 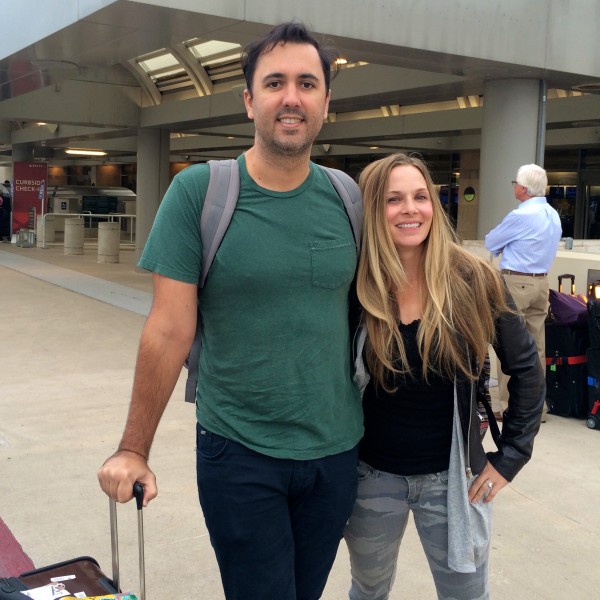 Our reasoning for our Seattle trip was to cash in on Peter’s 1st year Anniversary present to me—tickets to see The Dave Matthews Band at the Gorge! Only a big fat dream of mine.  Double bonus – Peter would be able to catch-up with some old friends from Seattle.

In Seattle we opted for an Airbnb on Capitol Hill which turned out to be an ideal location.  I was able walk to yoga classes, coffee, grocery stores, and…Nordstrom. (to Peter’s dismay) 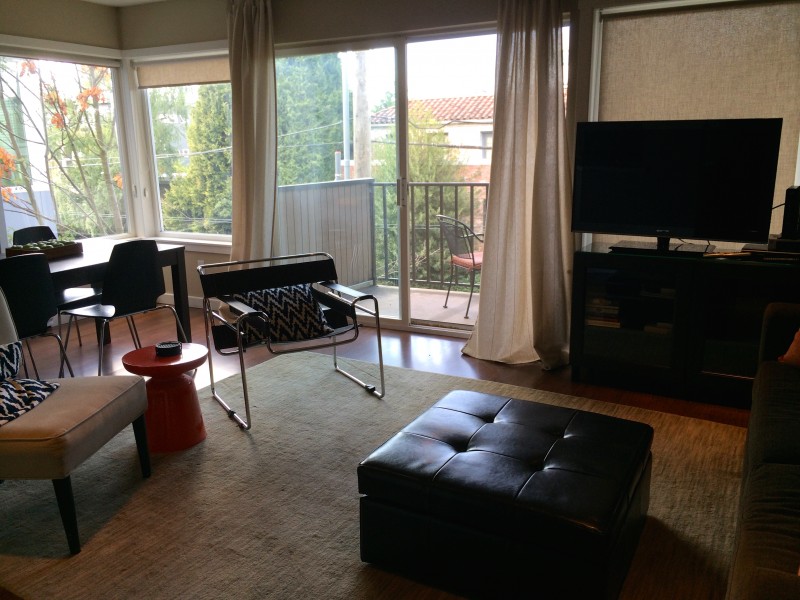 Our first few days in Seattle Peter played tour guide and took me around to all his old spots.  The tour included a trip to University of Washington.  It was especially fun to hear and see him recount and relive stories from his school days.

The campus is quite beautiful with a New England-esque architecture.  The campus is a must see during the fall when the leaves are changing or the early Spring during the Cherry blossoms.  It’s exquisite.

The campus tour included a visit to the library where Peter, back in the day, took on countless hours of studying.  You can see in the below picture what an inspiring place it is to learn. 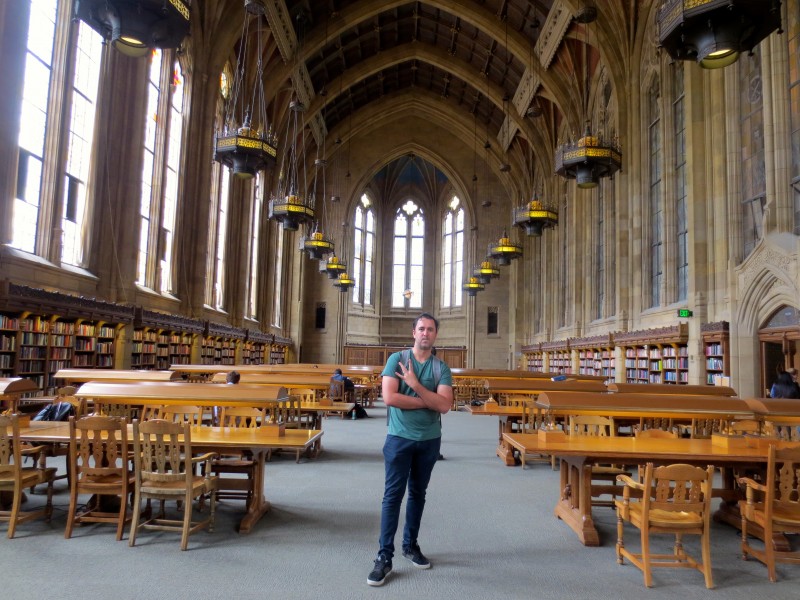 We also visited his Fraternity House where I imagine no studying occurred. 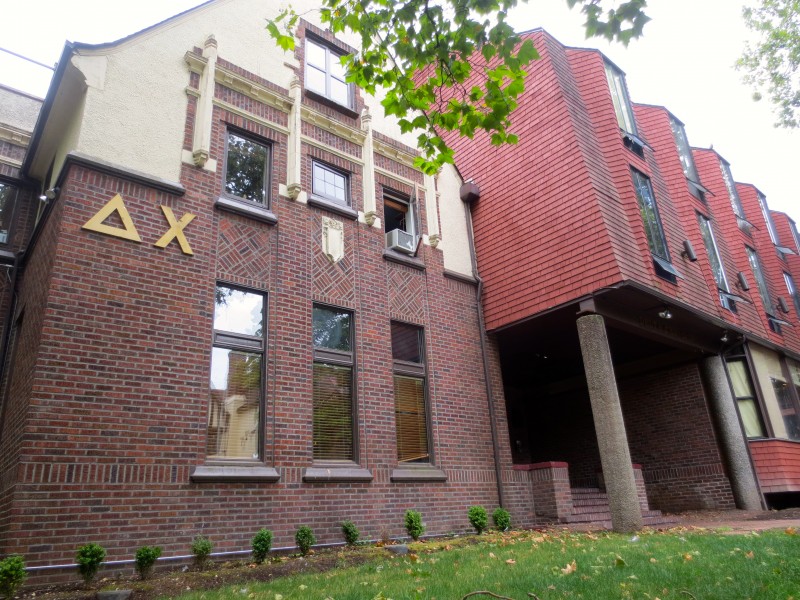 The days leading up to the concert we got a chance to catch up with friends and I was also able to see and experience what a special place Seattle is.

First off, I was able to reconnect with my childhood buddy RJ whom I have been friends with for over 30 years.  We grew up in the same neighborhood in Fairbanks.  I even took him to my Senior Prom. 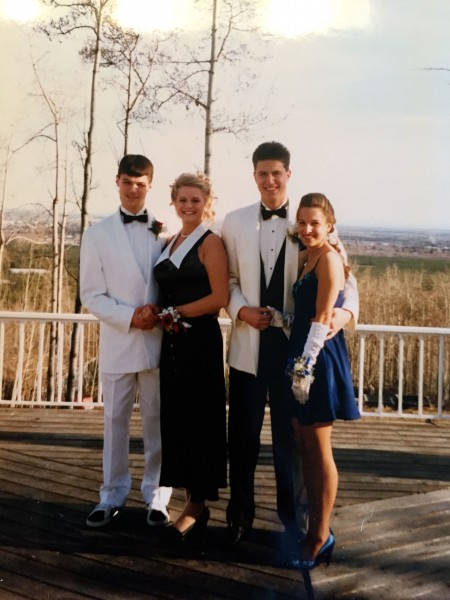 RJ is a DMB Gorge expert and aficionado.  He has been going every year for the past 15 years.  Him and his entourage of friends have it all dialed in with their campsite equipped with all the Gorge camping necessities.  I was thrilled that we would be able to join in on all their fun during the pre-show activities. RJ and I got a chance to catch up in Seattle before meeting up at the Gorge a few days later.  Always so nice to connect with friends that you knew while growing up. 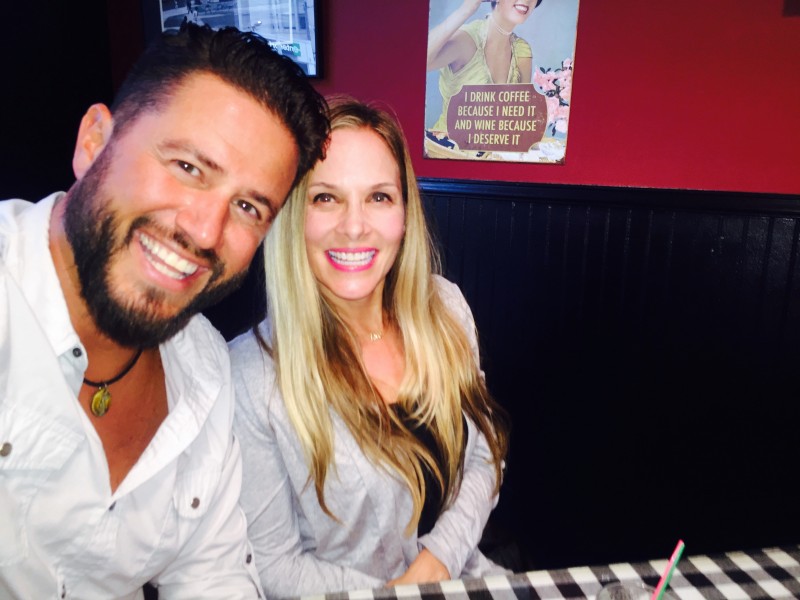 Our close friends Andrew and Theresa live near where we were staying so we had the opportunity to grab dinner with them at a stylish, hip restaurant, Oddfellows, and hang out afterwords at their new home.  In the below picture we all agreed that I look like I’m their daughter due to my small stature. 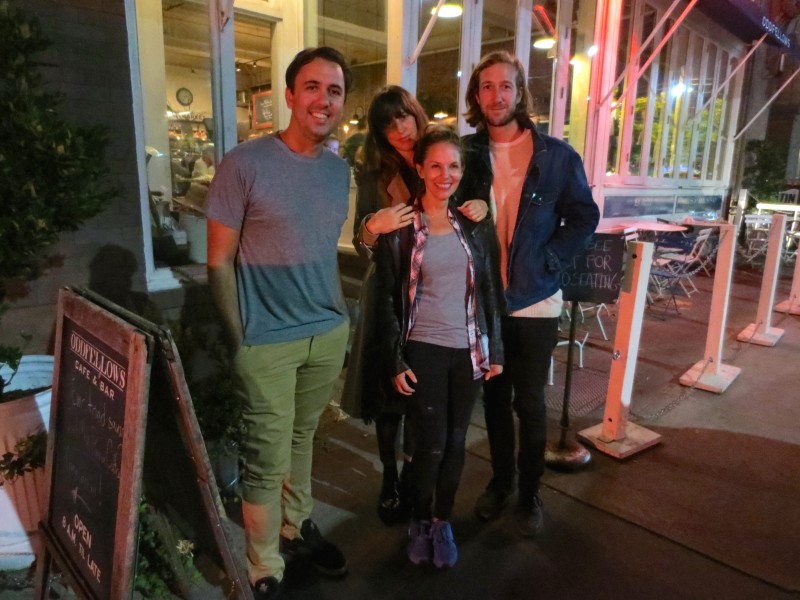 Another fun thing we got to do was hang out with Peter and Debbie—the couple we had just traveled through South Korea with.  We had a great time regaling in our overseas stories as we now did some super American things together.  Such as cheer on U-Dub football and drink beer.  A bunch of us met up at their friends Annie and Steve’s where I experienced some die hard Husky fans. 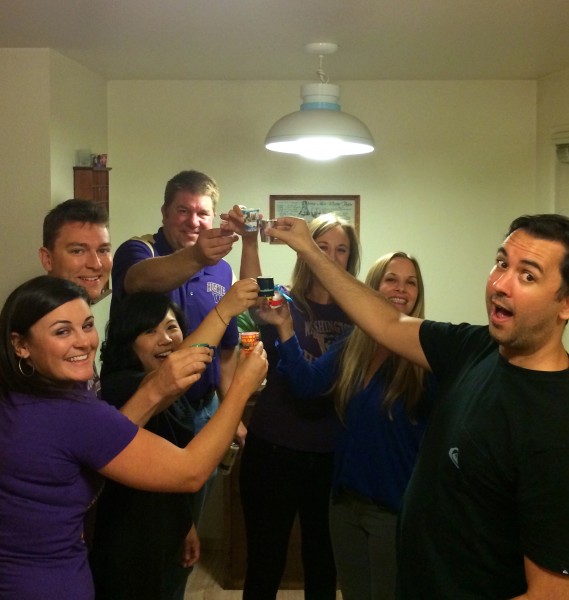 Even though I have never lived in Seattle or even spent that much time there, I somehow seemed to randomly bump into familiar faces.  Like when Peter and I were walking downtown and we suddenly heard from across the way someone calling out, “Jaime! Jaime!”

It was my friend Kellie who lives in Seattle, but she was also joined by our friend Janet who lives in California.  We had a mini reunion on the street and sent our friend Jen a picture of us.  I met Kellie and Janet at Jen’s bachelorette party years ago.  Always so joyous to run into friends you haven’t seen in a long time. 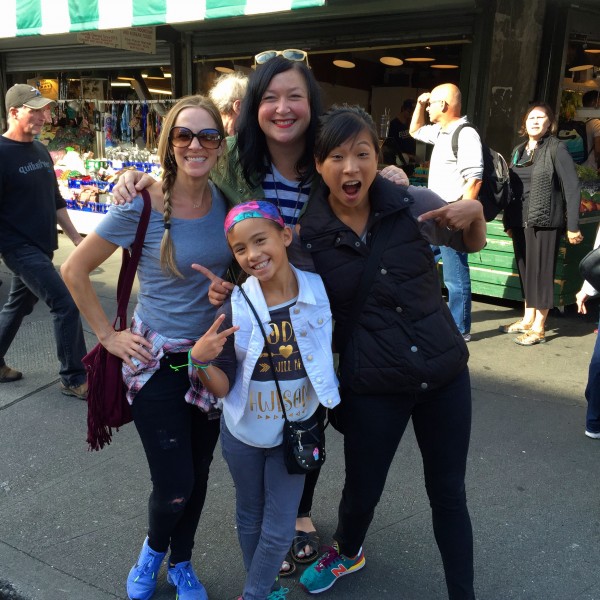 Additionally, my friend Stephanie who I grew up with in Alaska happened to be in town from Las Vegas.  We hadn’t seen each other in 16 years! We were so excited to meet up and reconnect.  We marveled about how it didn’t seem all that long ago that we were playing softball in my backyard as kids.  How time and distance doesn’t matter when it comes to friends that you grow up with.  That there is a comfort and ease that is unique to certain types of friends and how grateful we were to be back in each others presence.  We both agreed that we wouldn’t let that much time pass again. 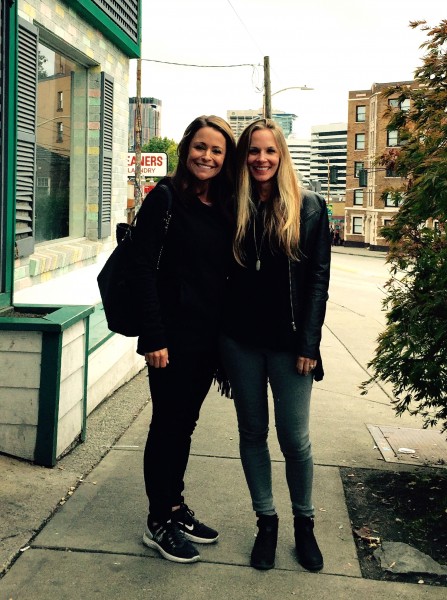 After tons of catching up over a few days we were finally off to the big Event—Dave Matthews Band at the Gorge.

For the two hour drive Peter humored me by listening to DMB the entire way.  We arrived about noon on Saturday to the campgrounds where we were immediately welcomed by RJ and his crew.

The campsite is enormous, but we were able to spot them pretty easily due to the landmark of a parachute with attached flags, oh, and a bus.  Like I said this crew goes all out. 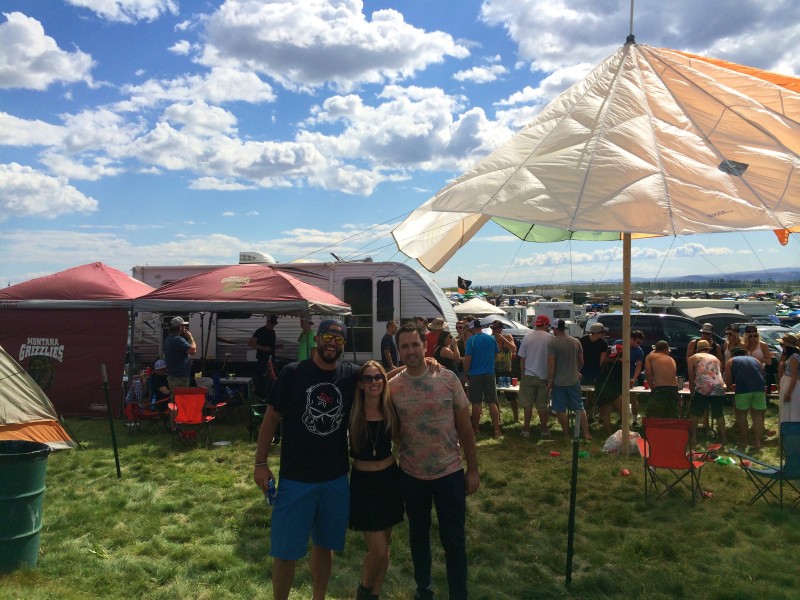 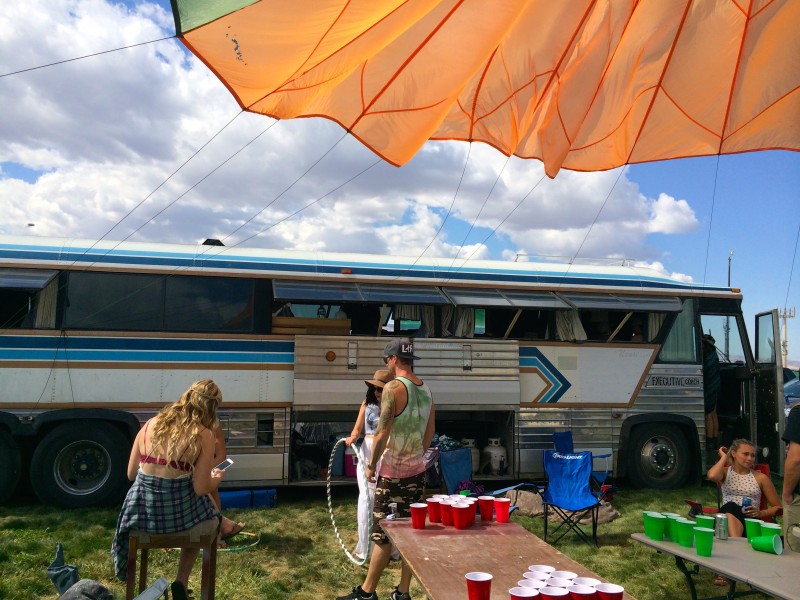 We had a blast meeting all kinds of people.  Like most festivals, people are in good spirits, friendly, and all around having a great time.  Even just walking over to the bathroom could potentially be an adventure of people watching or meeting new friends.  I also think that Seattle produces a very down to earth and welcoming type of person.  Rj was a wonderful host and was always making sure Peter and I were having a good time.  Which we of course were. 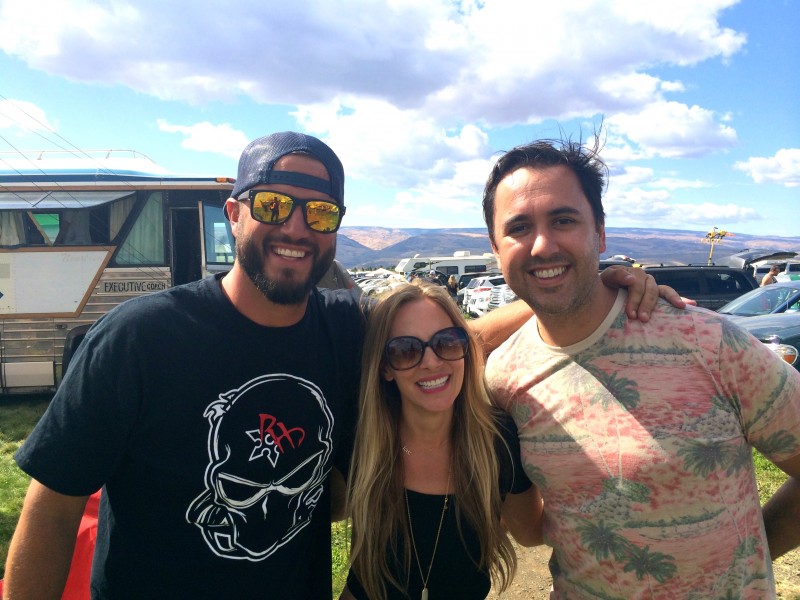 The main event was finally upon us and we all headed over to the venue. 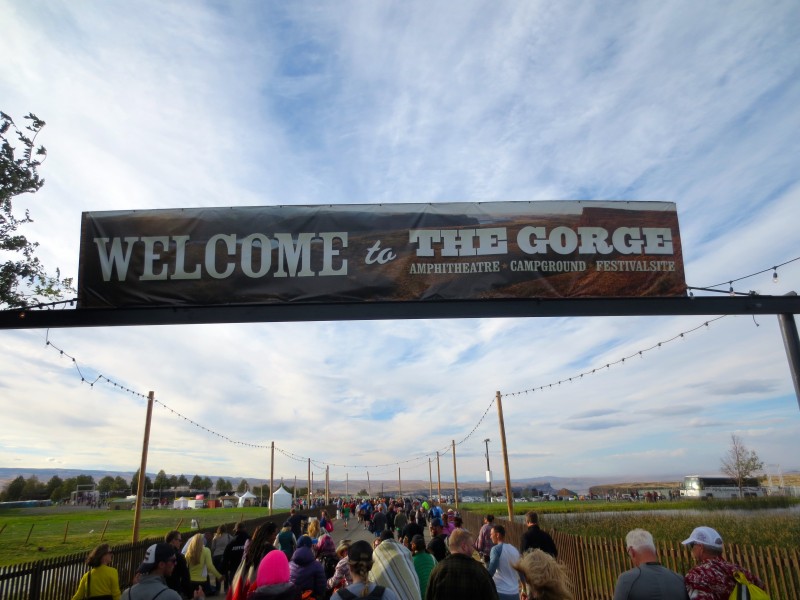 I had never been to the Gorge so Rj was giddy with anticipation over seeing my initial reaction to it.  It is revered by the Wall Street Journal as one of the most scenic concert locations in the world.  I walked up the hill with a touch of butterflies in my stomach.  As I got to the top and saw it in all its glory, I quickly realized why there is so much hype over this outdoor amphitheater.  The sprawling views of mother nature were both inspiring and humbling.  The trifecta of the sand colored gorge with the Colombia River snaking through the Cascade Range made for a surreal experience.  It’s an unforgettable view and quite the backdrop for any band and concert goer to be a part of. Pictures do not do it justice. 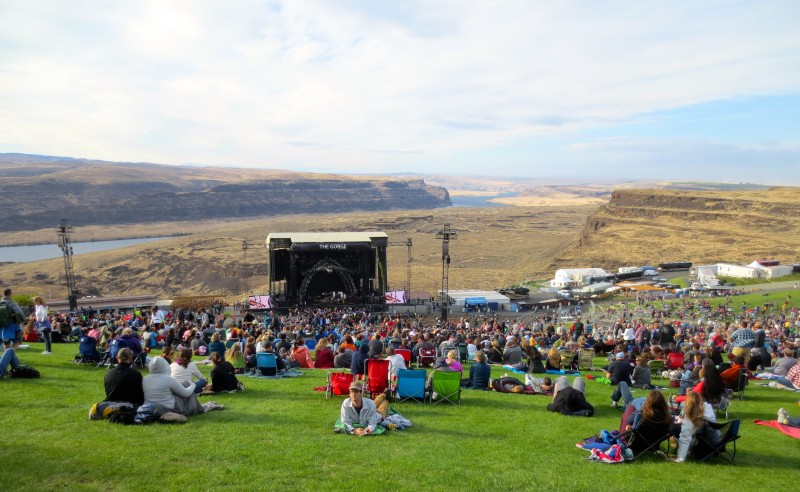 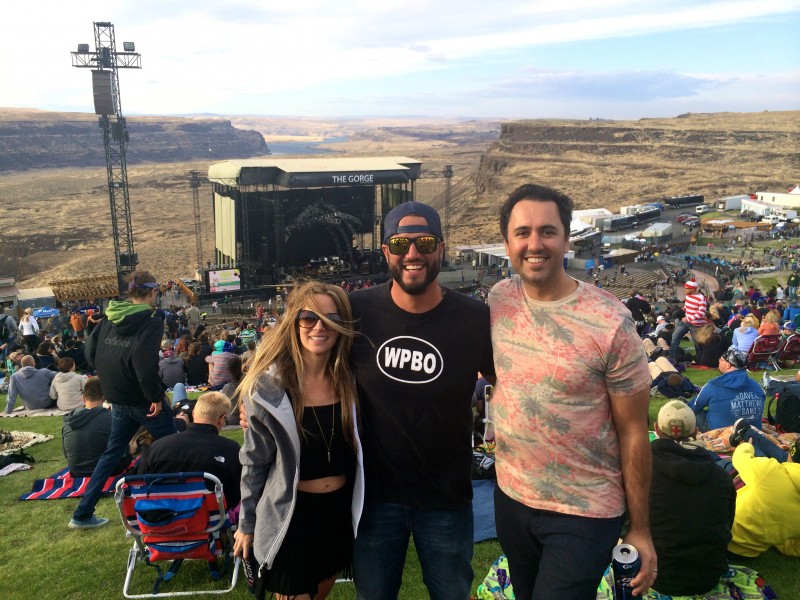 To keep up with the theme of bumping into old friends—we ran into two friends from Fairbanks that Rj and I both know from home, Bill and Meadow.  Always a treat to run into Fairbanks friends.  All of us were thrilled to be there and couldn’t wait for the show to start. 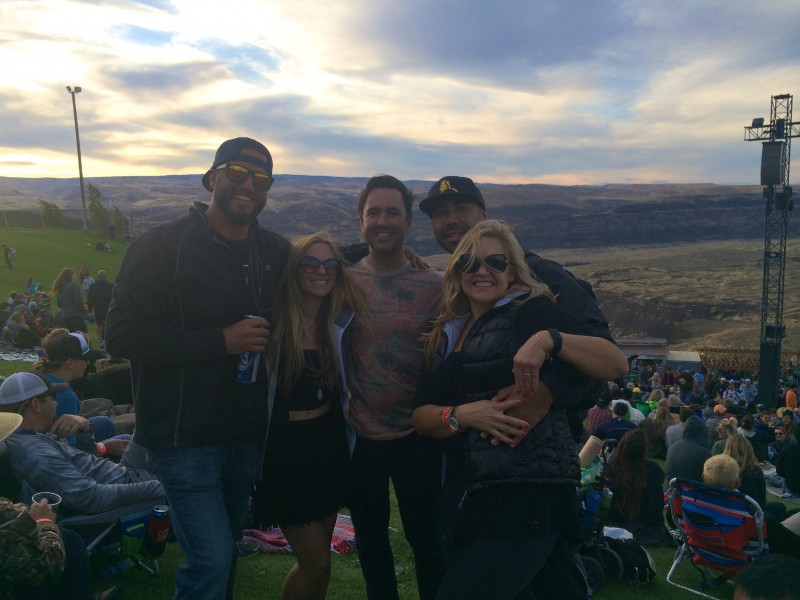 Before DMB took the stage we were treated to a stunning sunset and then shortly after walked over to our seats. 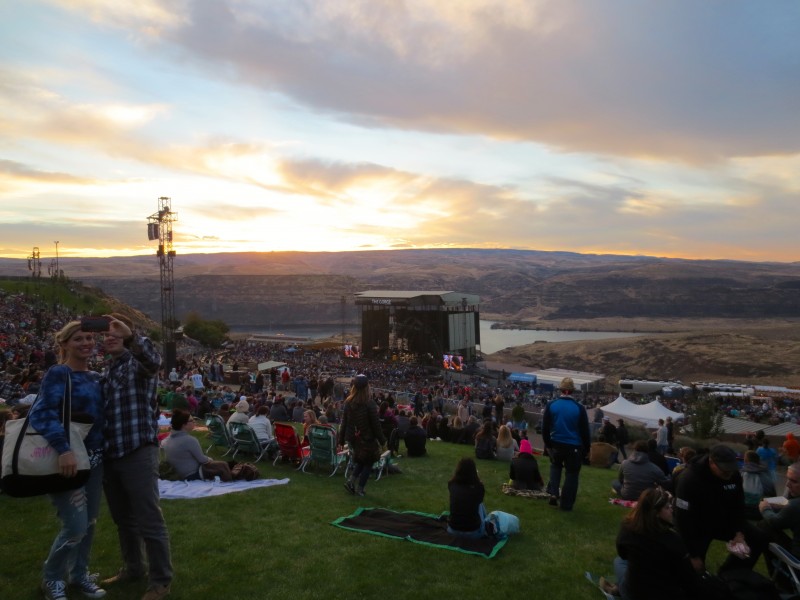 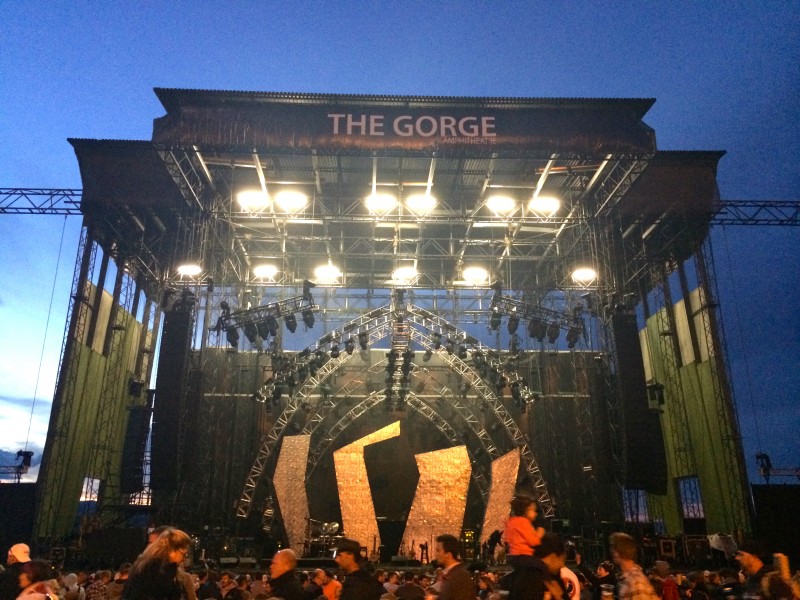 The next few hours were of pure joy filled with 25 DMB hits, including some of my favorites: Crush, Loving Wings, Tripping Billies, Pig, Granny, Lie in Our Graves, Say Goodbye, Best of What’s Around, Rapunzel, Two Step, and You and Me—which is one of the songs from our first wedding dance.

I have been to a ton of DMB concerts and while I wouldn’t necessarily say this was the absolute best I have ever seen, it’s the energy, campgrounds, people, and venue that make it  such a unique and memorable experience.  Everything surrounding the actual show is what makes up so much of the fun of it.  It is an adventure that I highly recommend.  Peter’s anniversary gift was a huge success.

Peter and I drove back to Seattle that night.  We had an early flight to catch in the morning to Alaska.  More adventures coming up in my hometown of Fairbanks.

Special thanks to my buddy Rj for teaching us and showing us the ropes of the Gorge.  In gratitude my friend. 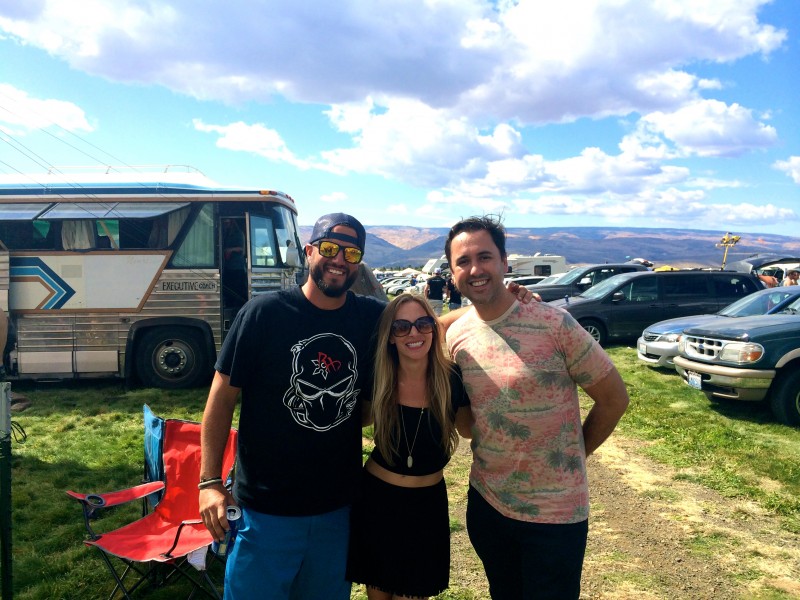