Upon boarding our flight in Muscat the ticket scanner at the jetway made a loud and exaggerated beep. Peter clinched his fist in success. He knew what was happening next. “Excuse me, Emirates would like to upgrade you two to business class if that’s ok with you.” Score. Not only had we flown to Oman deliberately to get a cheaper fair to Africa, we were now being upgraded on a premium airline. The day was looking good.

The flight from Muscat to Dubai was a little under an hour and then we had another 5 hours due South along the East coast of Africa to the Kenyan capital of Nairobi. Peter and I were both thrilled to be starting our African adventure. We both love Africa and Peter will often comment that he feels like he lived in Africa in a different life as it feels so familiar and fills him with joy.

As soon as we landed in Nairobi, we quickly realized that Kenyan procedures are unlike anywhere else in the world. When we walked through the airport doors we were instructed to get in a single file line so that we could be health screened.  This consisted of walking by a video camera and viewing your temperature in a big monitor – the screen would turn blue if you were sick. They have these in Asia that are typically manned by a person half-asleep. In Kenya a small team was watching the screen as if it was the final seconds of a soccer match, looking for even the slightest hue of blue.

Through the health screening and onto immigration where we obtained a visa (only payable in USD and only in bills printed later than 1996). They required finger prints of every finger, including thumbs. And a picture. Then it was onto the Yellow Fever vaccination check which I had received in Scotland a month or so before.

We finally made it through and the waiting game started for our luggage. Despite being the only aircraft to have landed and a 45 minute immigration experience, we still had to wait another 30 minutes for our bags to arrive.

As Peter waited to retrieve our luggage I used the facilities.  The only sign in the bathroom was the following.

As the locals like to say, “This is Africa!” 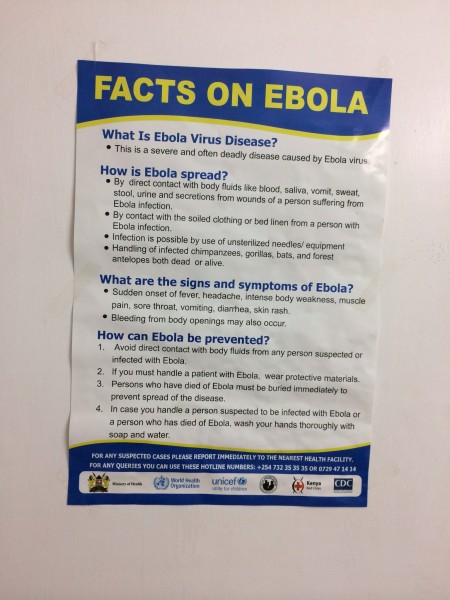 Clearly ebola was on the forefront of our arrival; however, at the time of our visit the country was ebola free and will hopefully remain that way. Being in Kenya was safe.  The distance to West Africa is approximately the same as California to New York.  Additionally the country is taking many precautions, like the health screening and not allowing passengers traveling from and through Liberia, Sierra Leone, and Guinea to enter the country.  However entering the county and observing the warnings did make the disease a little bit more real considering the huge numbers of deaths that were happening at the other side of the continent at the moment.

That night we checked into the Kempinski Hotel in Nairobi.  The service and the staff was on another level of friendliness.  The Kenyan’s seem to smile with not just their mouths, but also their eyes, and their hearts.  In our experience they have such an upbeat and positive demeanor about them.  Its feels utterly impossible not to feel happy when engaged in a conversation with a person who is smiling at you from deep within.

That night we stayed in and ordered room service, tired from the long day of travel.  The staff had caught wind we were on our honeymoon so when they delivered our food they gave us a bottle of wine on the house and a lovely bouquet of red and white roses.  Top notch service. 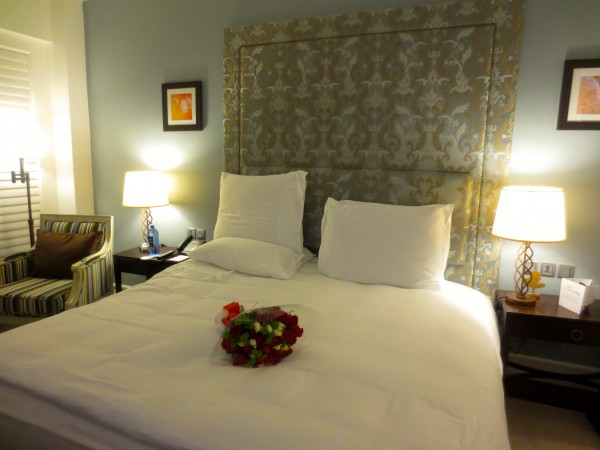 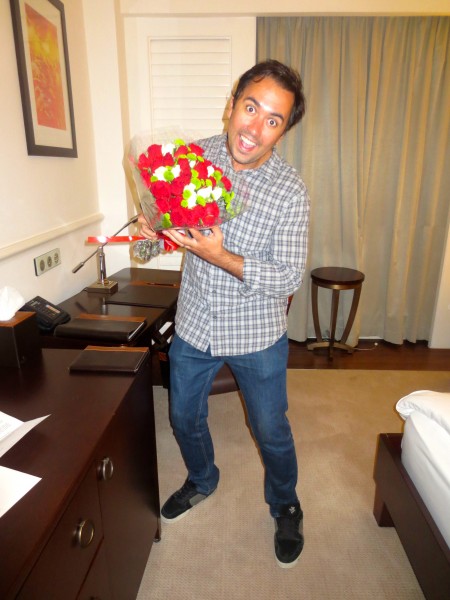 The next morning I woke up sick for the first time on our trip.  By sick I mean I just had a bad cold that I had finally caught from Peter.  A bit achy and feverish, which was an odd time for me to decide to get sick with all the ebola precautions.  We had big plans in the morning though.  We were off to visit The David Sheldrick Wildlife Trust Elephant Orphanage, so I shook it off.

The elephant orphanage was founded in 1977 by Kenyan born Dame Daphne Sheldrick.  The camp bears the name of her late husband who sadly suddenly died in 1976.  His death was the inspiration to start the camp.  Together before his death the two of them worked tirelessly for animal rights and conservation in Tsavo National park.  They rehabilitated and returned numerous species of animals back into the wild.  Dame Sheldrick is also an author who wrote her autobiography entitled, Love, Life and Elephants: An Africa Love Story.  I have since read the book.  If you are at all interested in animal wildlife particularly elephants this book is incredible.  Elephants are the most like humans in terms of intelligence and emotion.  They seem to remember everything and they truly feel.  You can literally make friends with an elephant and that elephant would do just about anything to protect you.  The author also discusses elephant’s ability to communicate telepathically.  Fascinating stuff but also tragic as the book discusses the horrors that elephants experience by the hands of poachers.

There are a few reasons that baby elephants become orphaned, but the main reason is their mothers being poached for ivory.  Elephants cannot live without their mothers until age 3.  Therefore, the orphanage takes these babies in where they are fed human baby formula.  In some cases the handlers, also known as mahouts, will feed the babies if the elephant is too weak to feed themselves.  The mahouts even sleep side-by-trunk with their elephants.  That’s why you see only men.  The woman stay home with their family.  When the elephants turn 3 they are taken to Tsavo National Park to mingle with wild elephants and eventually get their bearings back to return to the wild on their own.  It’s quite beautiful what they are doing at this orphanage and really touching. We were happy to pay the relatively high cost of admission in efforts to support their ongoing efforts.

Peter and I stood around a roped off area waiting for the baby elephants to make an appearance.  From afar we saw them approaching in the cutest manner.  A little trot to the area where all the guests were waiting with their eyes on the prize –  bottle fed milk.  Seriously heart melting. 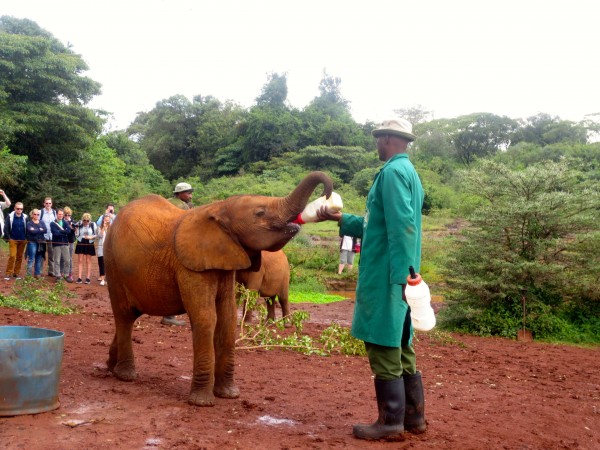 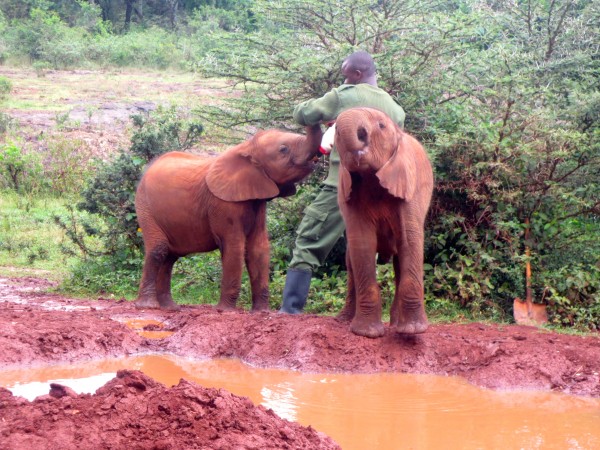 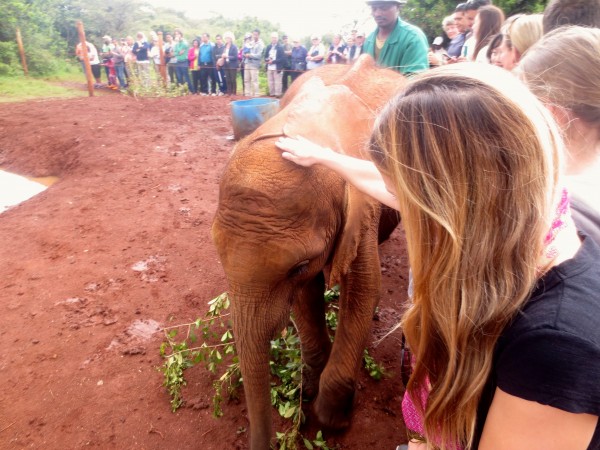 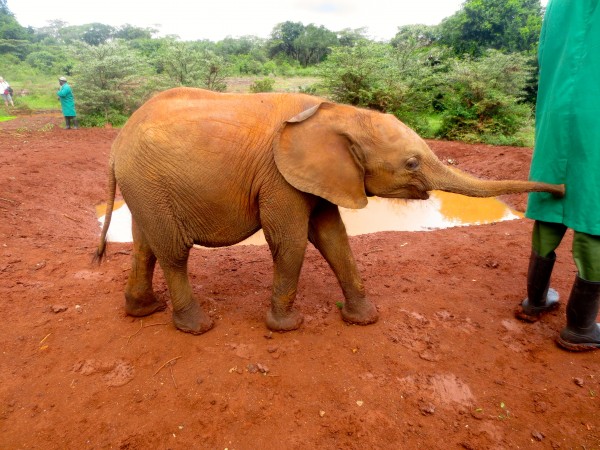 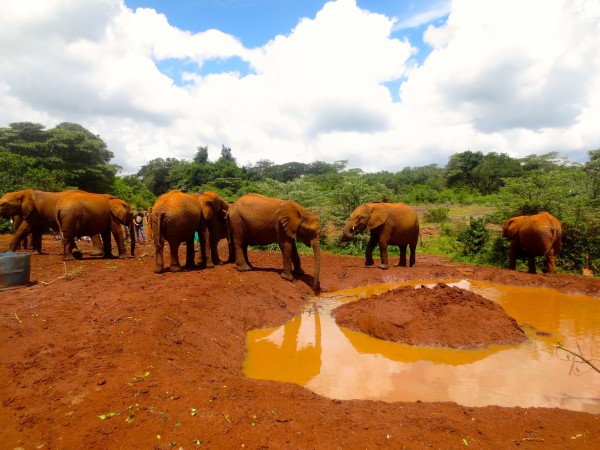 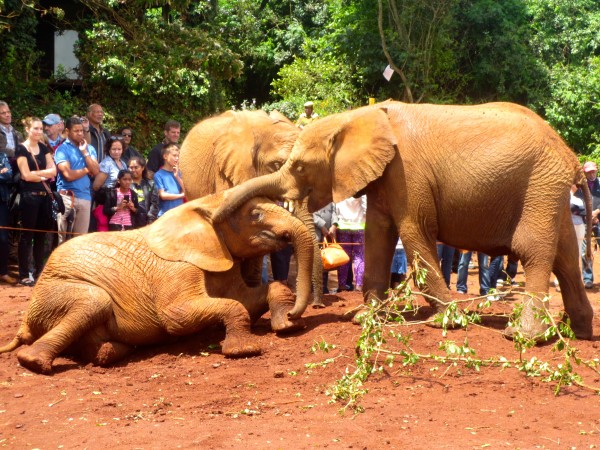 All in the crowd were entertained.  Well except for one little boy who was mesmerized by his iPad.  Oh the youth of tomorrow. 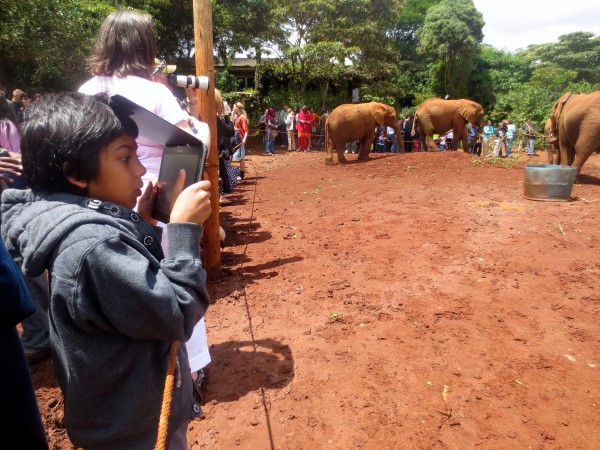 Crazy enough I felt so much better after our visit to the orphanage.  Cure for the common cold…baby elephants.  Who knew?

Another reason I loved being in Kenya was the impeccable service.  From the above pictures you can see it was a mud bath which basically ruined the shoes we were both wearing.  When we arrived back at the hotel I started to try and rub off the mud while I was outside.  I was approached by a hotel employee who explained that the hotel would attend to our shoes.  The next day my shoes showed up looking like I had just left the Nike store with a new purchase.  Free of charge. 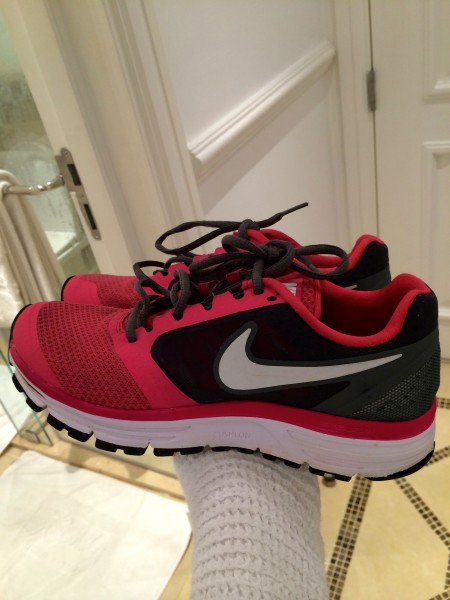 That night we grabbed dinner at the hotel Italian hotel restaurant, Lucca, where we had one of the best (and first) meals while we were in Africa.  Over dinner we discussed the upcoming weeks that would consist of getting up close and personal with the wildlife in the African bush.  We were both bursting with excitement.

The next morning as we were checking out we noticed that security had beefed up and a red carpet had been rolled out through the lobby.  We inquired and were told that three African presidents were coming to the hotel for a meeting at 10 AM.  We missed them by just 2 hours. 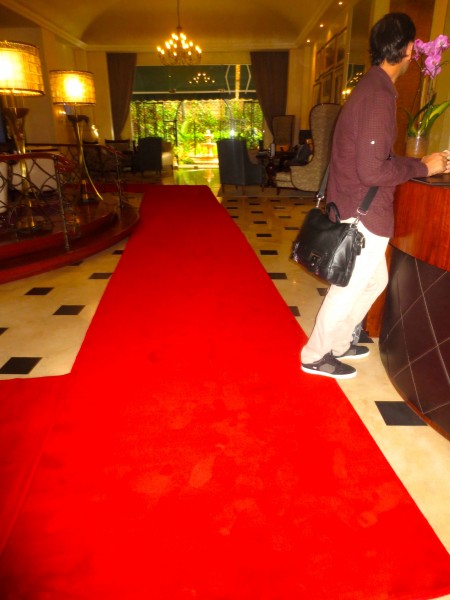 Next stop, Masai Mara.  Thanks for joining us on our African adventure.  It was a good one that I’m excited to share. 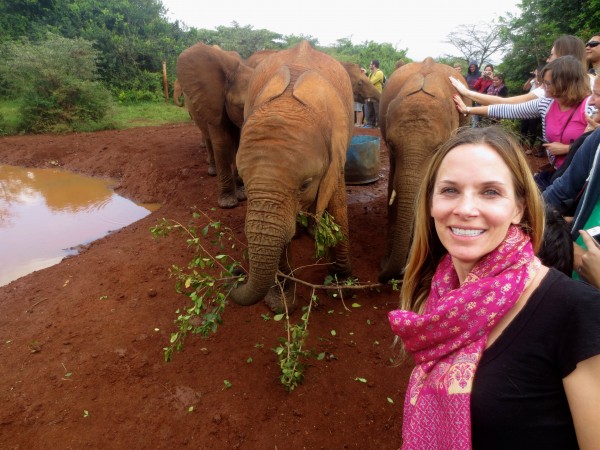