Loved our time in Lisbon

Portugal was a place Peter and I were both really excited about.  It is a country that we both had heard great things, particularly Lisbon.  Peter had actually wanted to live here at some point during our travels, but I pushed for Florence.  Doesn’t everyone want to live in Italy at some point? Well now that I have been to Lisbon I can say it would have been a great option for us to have stayed an extended period of time – we loved it!

When we got to our hotel after our flight from Bilbao we were both pretty tired from moving around so much.  We were changing destinations every 2-3 days for a little under a month which can be pretty draining .  We decided to stay in, order some room service, and download really bad TV (i.e., The Bachelorette and Real Housewives of Orange County – tortured husband).

The next day we were back at it.  For the next couple of days we took in many of the sights of Lisbon including castles, cathedrals, restaurants, the water front and more.

Lisbon is described by some as San Francisco’s little sister. We certainly felt that aesthetic in that its a bustling city on the water with seven hills, a trolley-system and suspended bridge named, The 25th of April Bridge.  It is compared to the Golden Gate Bridge as far as the look of it, but was actually constructed by the American company that designed the Bay Bridge.

One of the most fun and vibrant neighborhoods of Lisbon is Bario Alto.  This neighborhood is full of restaurants and bars with Fado music and is where the night life scene is.  It’s a fun area to walk around take it all in. 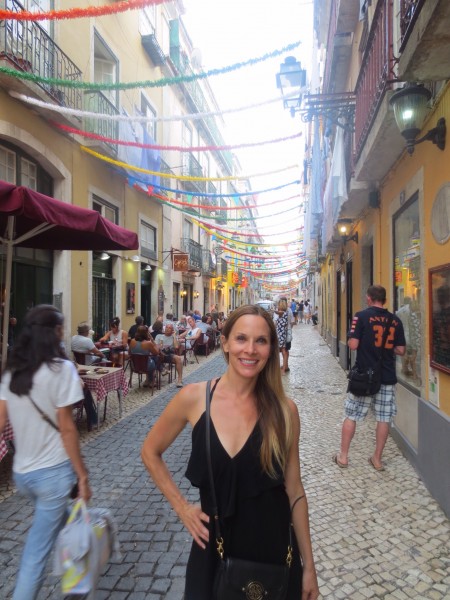 Restaurants are packed, streets are narrow, the city is alive with great energy. 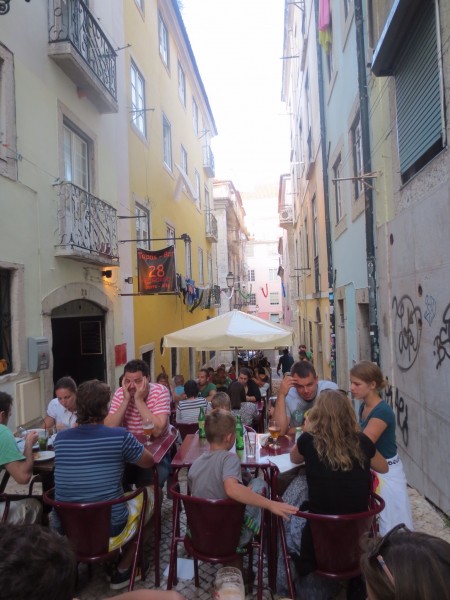 One early evening we took a stroll to the neighborhood of Alfama and watched the sunset atop St George’s castle.  We had a spectacular sunset and a wonderful view of the city.  There was a push-cart vendor selling champagne and wine on the grounds so we were able to enjoy a drink with our view. 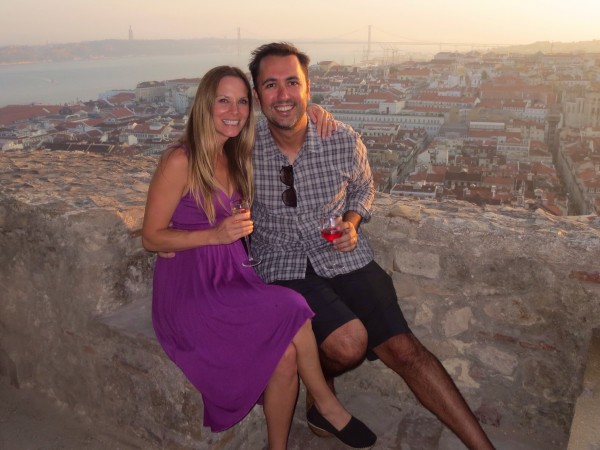 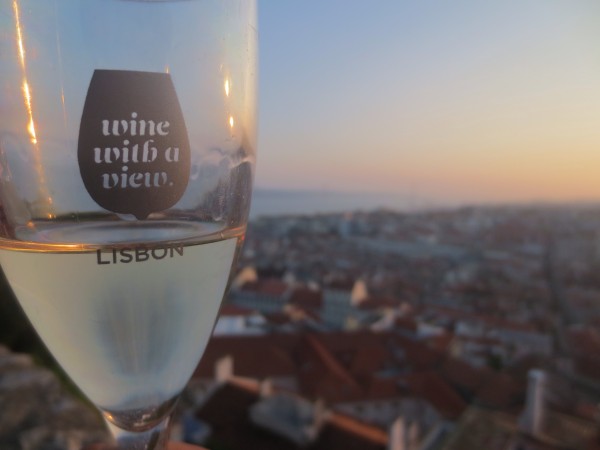 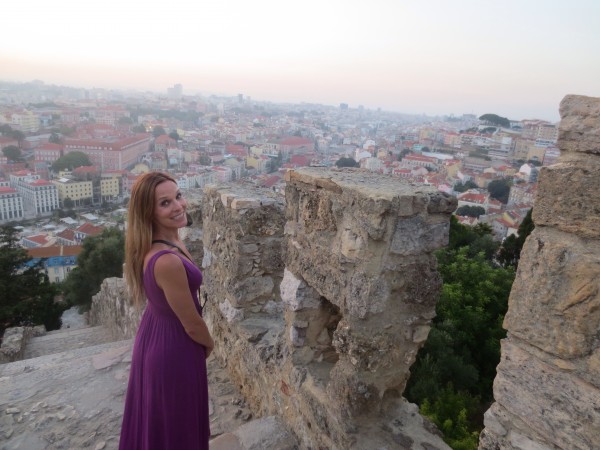 Belem is a bit further of a neighborhood with great history. We took the local-tram from Lisbon and it took about 20 minutes.  We had a great time exploring some of the most famous landmarks, including the Belem Tower which guarded the city dating back to 1520 and served as a sentimental landmark for Portugal sailors either arriving or departing with nostalgia. 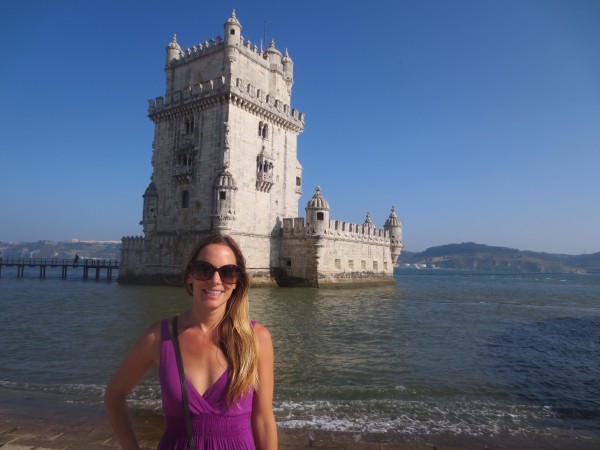 We also admired the beautiful architecture and learned about the history of Jeronimos Monastery.  This beautiful cathedral was built back in the golden age of Portugal which was during the 15th and 16th century.  Portugal was the leader of Europe for exploration of the world.  Trade routes were discovered to Africa, the Middle East, Asia, including India which was coveted due to spices.  Also during this time Portugal discovered and colonized Brazil.  The Monastery was built from a 5% tax that was enforced on commerce.  No expense was spared. Portugal was rich! Inside is a tomb dedicated to the Great Explorer, Vasco da Gama who was the first European to discover India by sea. 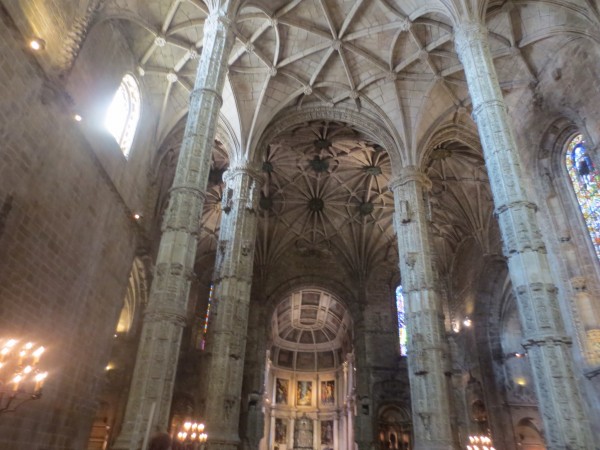 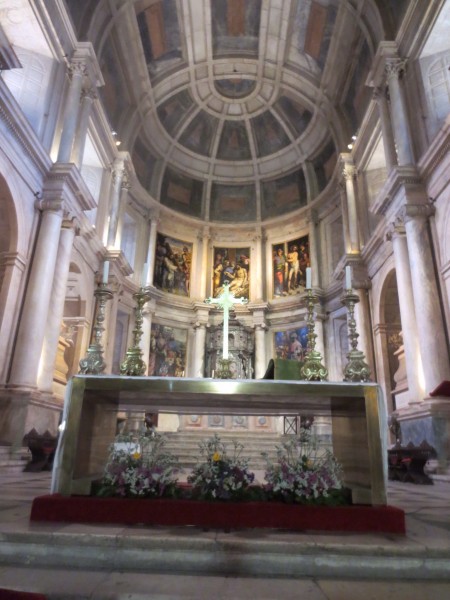 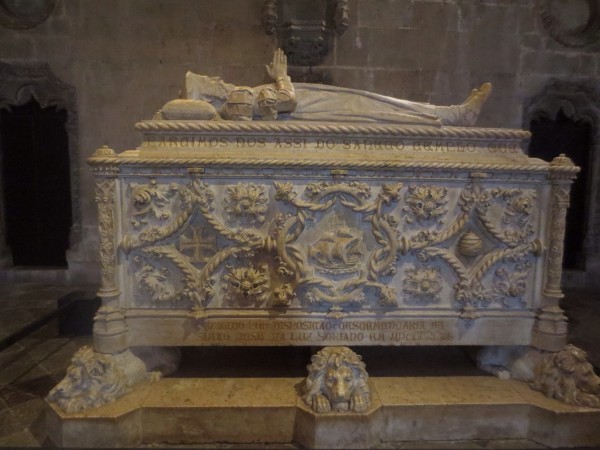 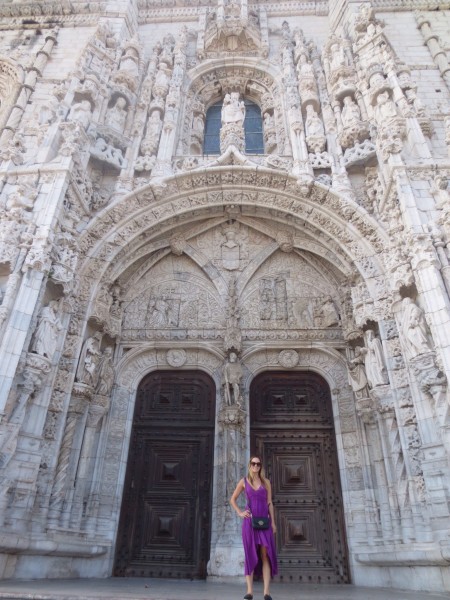 In 1755 a huge earthquake struck Lisbon weighing in at a 9 on the Richter scale.  This combined with the aftermath of tsunamis and fire destroyed 85% of Lisbon. Devastating. This combined with some other events took away the power Portugal had of the sea.

Our last stop in Belem was the Casa Pasteis De Belem which has been in business since 1837.   This is where you can purchase the famous dessert that goes by the name pasteis (pictured below). There is always a huge line of tourists and locals alike.   It is one of those things that you kind of need to do, but despite the pastry being pretty good, we weren’t over the top about it. Sometimes when there is line around a corner and a lot of hype you place unfair expectations on the product. 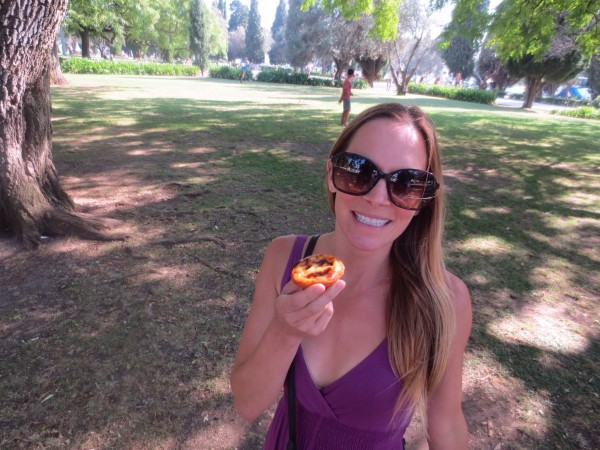 Our last full day in Lisbon might have been my favorite.  We took a day trip to Sintra which is like a fairy-tale land with massive castles and rich in history.  We ended up taking a tour from a Tuk Tuk driver because our cab driver was unable to drop us off at any of the castles due to the car that ran into our taxi on the way there.  That will wake you up.  No one was hurt, but the cab driver had to leave us on the side of the street as he figured out all the insurance information – it was the other driver’s fault and you could see it in the taxi’s eyes that he was looking to cash-in on the driver’s mistake.  Thankful for our safety, we walked around until we stumbled upon this little mode of transportation and decided to take it. 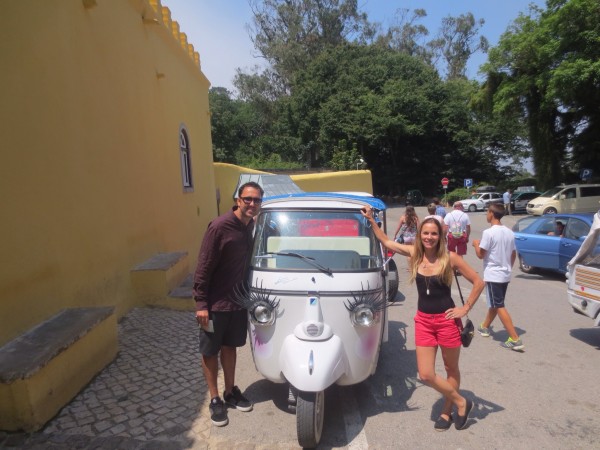 We started at the most famous castle, Pena Palace, which sits atop a hillside and can be seen from Lisbon on a clear day.  In 1842 construction began on the castle instructed by King Ferdinand II which was to be a summer home for the Royal family.  One of the most distinguishable features is the red and yellow colors of the castle. 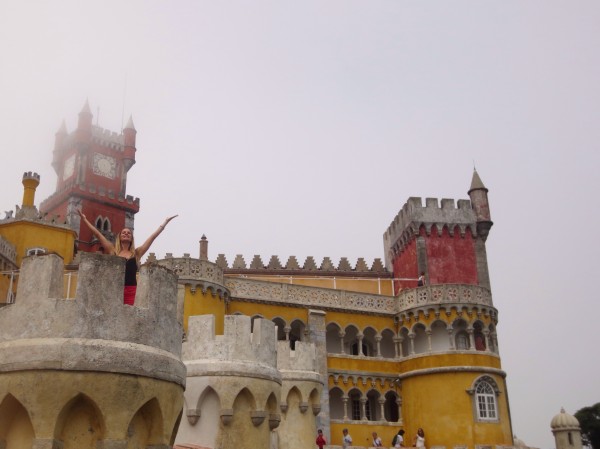 The grounds are massive and include a park and garden full of plants and trees that were imported from all over the world.  Is is rumored that the King’s mistress, Elisa Henler Countess of Edla  was able to live on the grounds unnoticed.  The King planted the Queen’s favorite flowers in a garden where she could be far away from where his mistress lived.  Sadly the Queen, Dona Maria II died while giving birth to their 11th child.  He later married his mistress.  Below is a pictures of the Queen’s table in the gardens where I felt compelled to do some yoga and Peter enjoying the Queens favorite flower. 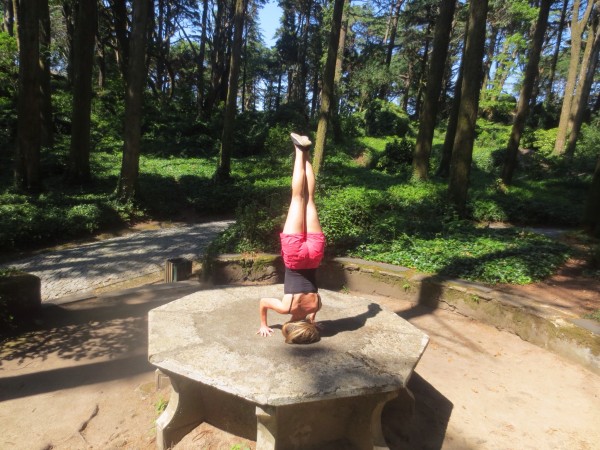 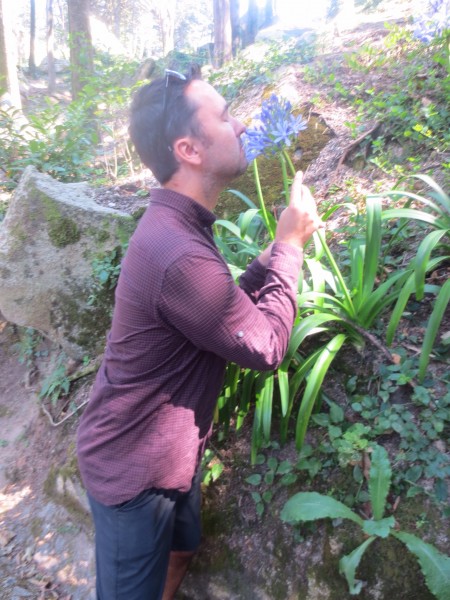 The second castle we visited, Quinta de Regaleria, was the vision of Antonio Augusto who was not of royalty, but had extreme wealth.  He commissioned Italian architect Luigi Manini to bring his vision to life.  On the property is an area of initiation for Freemasons.  Antonio Augusto was known to be a Free Mason.  The initiation spot is marked by an inverted well with 9 levels descending down representing Dantes Inferno.  Once you get to the bottom you have to make your way through a labyrinth of grottos which eventually leads you out to light and water. On the water are stones which assimilate walking on water at the end of the journey.  Peter and I took the trip from darkness to light completing the old initiation path, though we’re still not Free Masons (or are we!) 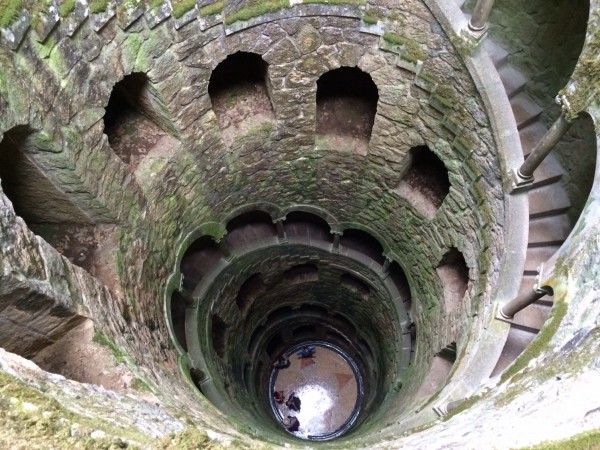 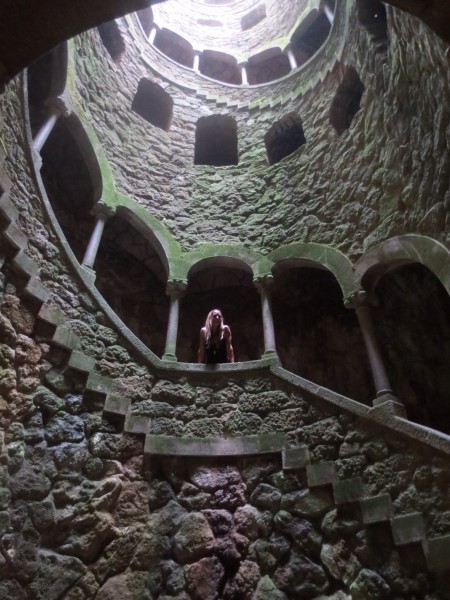 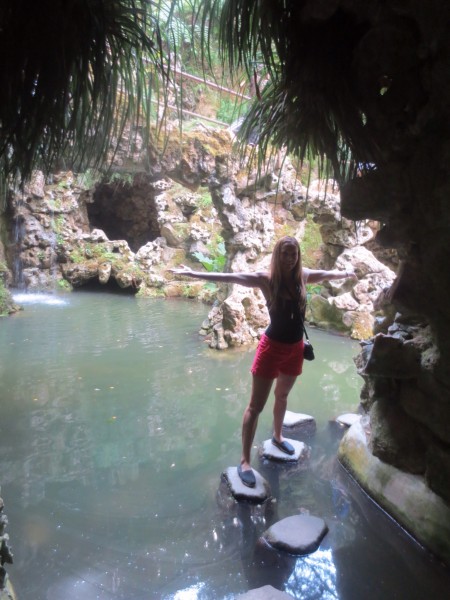 Sintra has a microclimate because it is shelterd between mountain and sea.  This allows for many types of plants, trees, and flowers to thrive in this environment.  Aside from viewing the many castles, taking a walk through the forests is a must.  It’s really quite beautiful to see all the lush green and different types of plants in trees all in one area – palm trees, oak trees, eucalyptus. Most of the vegetation was imported and planted for experimenting.  The perfect weather allowed whatever was planted here to thrive. Its hard to believe that the forest below was manufactured by man. 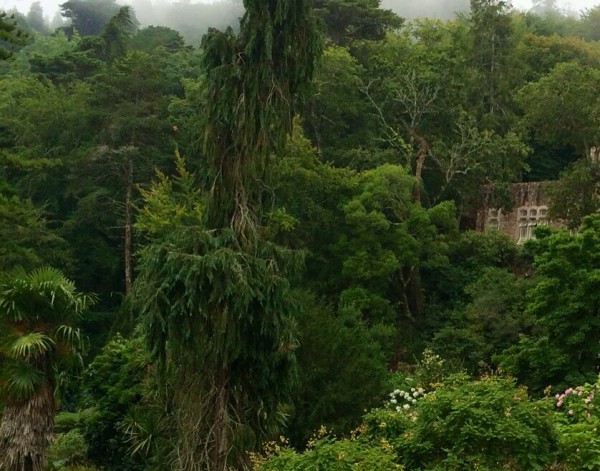 After a long day in Sintra we headed back to our hotel to relax for a bit before dinner.  We really wanted to go somewhere on our last night to hear Fado music.  Fado music is traditional Portaugese music.  It dates back to the 1820′s.  The music is mournful usually about loss or longing.  We opted for the restaurant our hotel recommended, Clube de Fado.  We are so glad we did.  I think because of the connection with the hotel we got the best seats in the house to take in and enjoy the Fado music.

The entire evening was wonderful.  From the restauran to our waiter to the food and to the music.  Good food and live entertainment is my happy place so I was thrilled.

The dinner worked in courses accompanied to music. Your first course would come out, lights-off, Fado music would play for 15-20 minutes. Music stopped, lights on, second course out and so on. This continued for three courses and it was absolutely fabulous.  The musicians were so, so talented and passionate.

Here is a video of authentic Fado music.  So fun!

After a perfect last day in Lisbon we were off to Nice in the morning.  Yes, back to France, but this time Mediterranean style.

Much love and fondness for Lisbon, 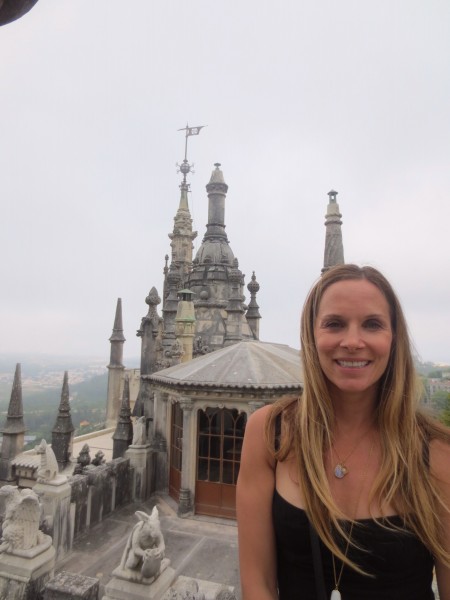