Dubai has the biggest everything

After saying goodbye to our friends in Budapest we headed to our next destination in the United Arab Emirates, Dubai.  This was my first time stepping foot in the Middle East.

Our flight left Budapest late and we circled around Dubai airport for the runway to clear. When we were finally granted a parking spot for our airplane, walked for 15 minutes to customs and waited in a hysterically long immigration line, it was closing in on 3am. By the time we checked into our hotel, The Conrad, it was 4am. Given this bizarre arrival time and jumping forward 3 hours, one thing that oddly sticks out from our time in Dubai was suffering from jet-lag.  Sometimes a 3-4 hour time change can effect you more than 12 hours.  It was tough to wake up early while we were there.  We were both really surprised by that.

Dubai is one of the fastest growing areas for tourism.  It’s a perfect international hub being 5 hours from Europe and accessible to Asia, Africa, North America, and even South America.  They market themselves as being able to reach most main international destinations direct from the Middle East.  Its 16 hours from LAX which is about the furthest possible destination you can reach from Dubai on one flight.

Dubai struck the oil jackpot and hasn’t looked back except for some economic crisis during the Gulf War of 1990. However, after the Gulf War, with oil prices on the rise Dubai rebounded from the economic crisis as it became a major port and refueling station. Dubai realized that one day the oil would run out so with some foresight they dumped so much wealth into developing their tourism industry to provide some diversity to the country’s economy.

How do you market a manufactured desert city in a conservative Middle Eastern country?

You aim for superlatives.

Dubai has the tallest building in the world, Burj Khalifa. It has the biggest mall. One of the biggest indoor ski-resorts. Biggest airport. The largest artificial islands. The list goes on and on. They are constantly working on modern-day technological and over-the-top luxury marvels. One example is an underwater luxury hotel. Literally the entire hotel is underwater. Your entire surrounding will be one big aquarium.

One of the stranger and much publicized projects is the artificial islands that are created in the shape of a world map. Check out the picture below from the plane. You can also visit Europe in Dubai where you will pay in Euros, stay in an opulent villa in Monaco, enjoy street performers and get snowed on in Germany.   Commissioners claim they are going for an authentic feel.  Probably best just to go to Europe, but what an idea and the money is there. 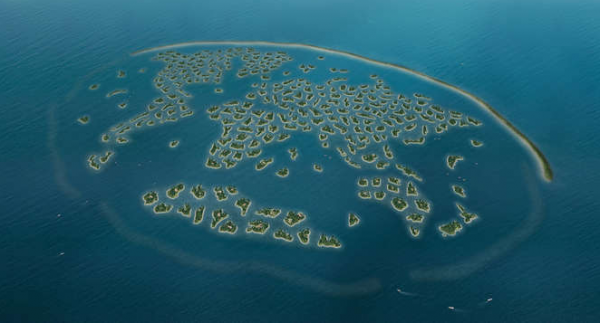 Weirded out by Dubai yet? Its admittedly all rather strange.

But back to our trip.

Our first day we had plans to explore the tallest and largest structures in the world, Burj Khalifa. But before that we had to make a stop on American soil in the Emirates at the embassy.   I had a nearly full passport so I needed to add additional pages.  A fun problem to have.  We were traveling to Africa soon where some countries take up two pages for their intrusive tourist visas.  I was given 48 additional pages.  Peter was jealous of my bigger passport (he’s on his third).  Since I was in Dubai I wanted to have the biggest something. 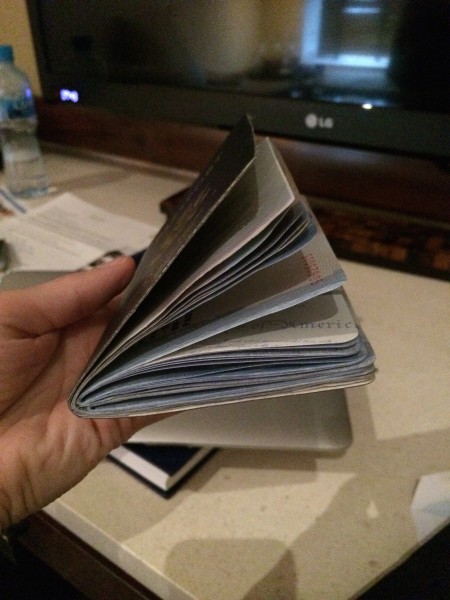 In Dubai a trip isn’t compete without a trip to Burj Khalifa, the tallest man-made structure in the world at 2772 feet. It has 163 floors.  Inside the building are 8 hotels, corporate suites, and residential homes.  Quiet a view for people living and working there.  The next tallest building is the Shanghai Tower at 2073 feet.  The tallest building in the US, One World Trade Center, is 1776 feet.

The highest level you can grab a view from is the 148th floor known as the Sky level.  These new buildings nowadays are equipped with such modern technology. As you wait for the elevator you can see what floor the carriage is on and how fast its traveling via projected image. Inside the elevator you are treated to a 360-degree movie on the carriage walls telling the story of Dubai as you soar to to the top, ears popping. 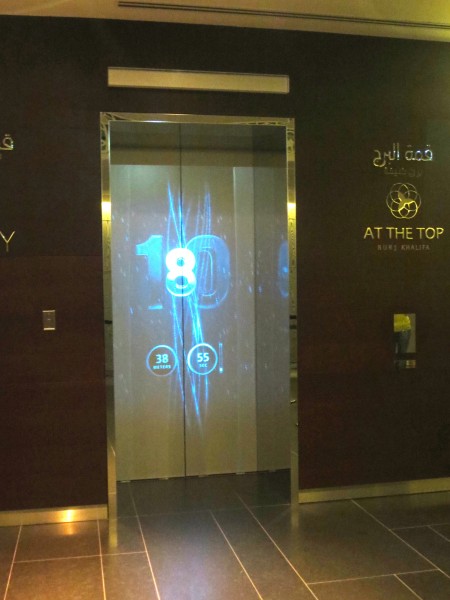 On the Burj Khalifa tour you visit the 124th floor which use to be the “Tallest Observatory Floor in the World” until 2011 when a building in China, Top 488, developed a higher one.  Not to be outdone an additional observatory floor was built on the 148th floor at Burj Khalifa to reclaim the title.  So now the tour includes two different sky observatories.

You can sit on top of the world so to speak and check out 360 panoramic views of Dubai. It felt like looking out of an airplane window. Its hard to believe you are actually on a building connected to the ground from up there. 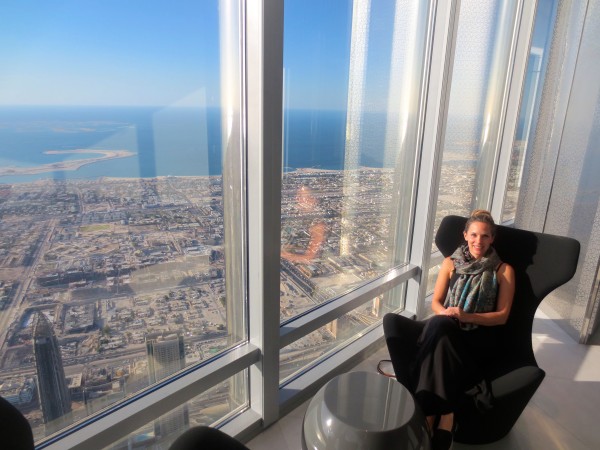 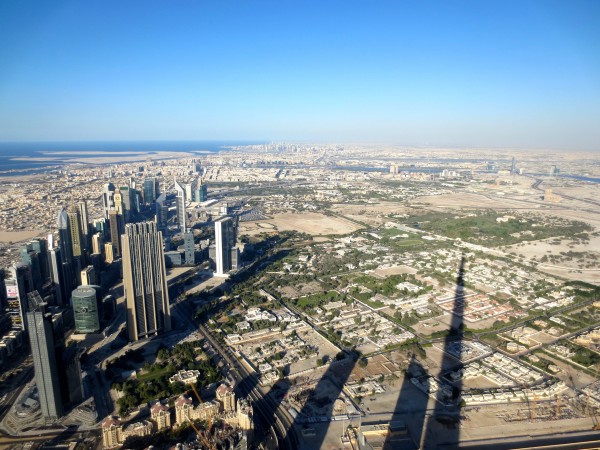 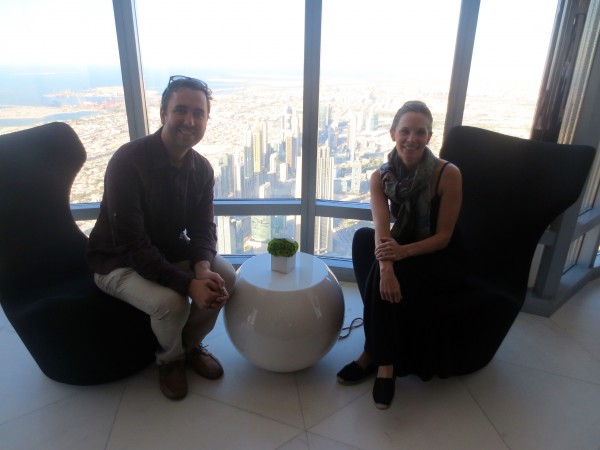 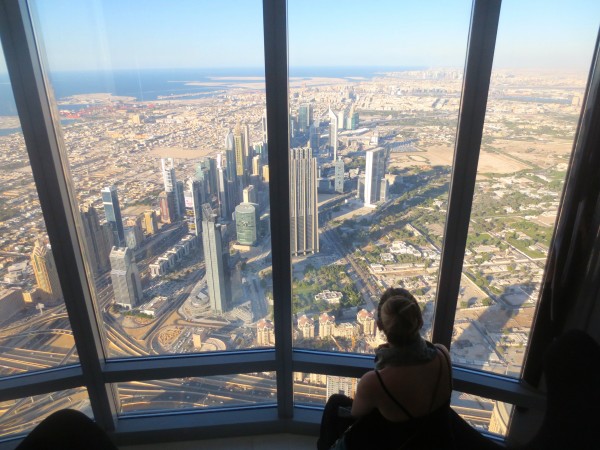 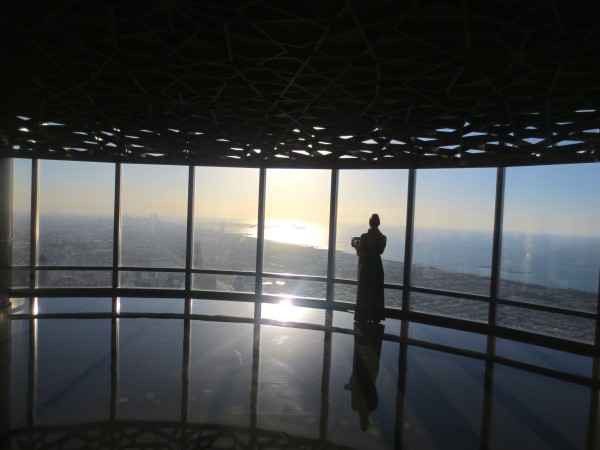 We also got a chance to see the world islands. 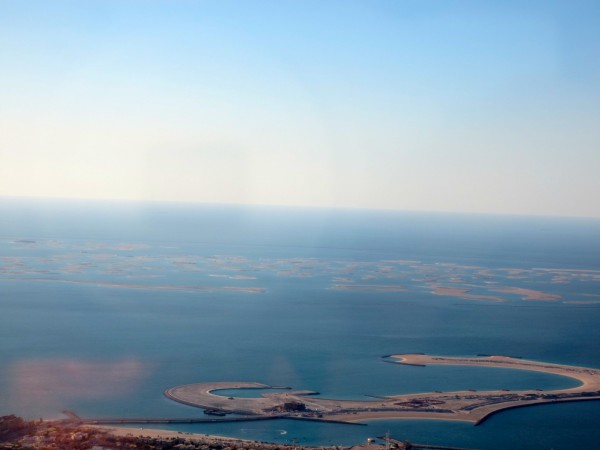 Connected to the Burj Khalifa is the biggest shopping mall, The Dubai Mall.   This mall has 1200 stores, ice skating rink, aquarium, and the worlds brightest and largest water show.  Of course.

Name a restaurant and there is a good chance that Dubai has a chain.  Peter played a game asking me to name any US brand or restaurant to illustrate the insane number of branches Dubai boasts.  I replied, “Lemonade.” A little defeated he admitted that it was unlikely there was a Lemonade. But lo and behold, driving along in a taxi we hilariously spotted a Lemonade chain in Dubai. You can literally find everything in Dubai.

Peter was looking for some US based comfort food so we found a Macaroni Grill in the massive mall.  It had been months since we had eaten from an American restaurant.  I don’t know if it was the way American food was made in Dubai or if we weren’t use to American food, but we both felt disgusting afterwords.  It was probably a mixture of both, but we felt like we had a log stuck in our stomach and were exhausted for the next hour as our body worked overtime to digest.

After dinner we strolled outside to check out the famous water show that that goes on every 30 minutes in the evening.

Here is the Dubai skyline as a crowd waits to see the show. 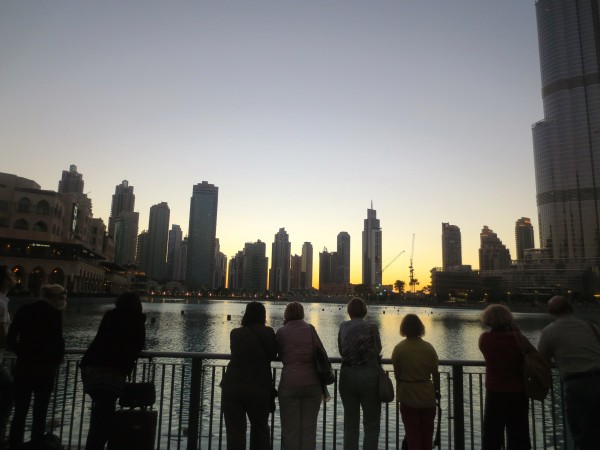 Surprisingly the water show was quite entertaining.  The bright lights, 50 story water splashes, and the music did make for some delightful entertainment.  So much so that we stuck around to watch a second show. And then a third. 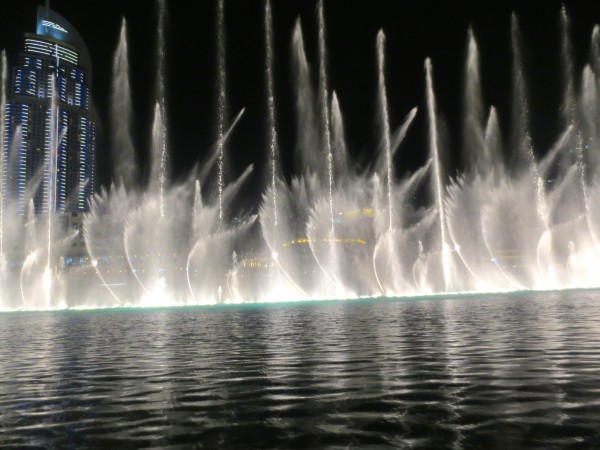 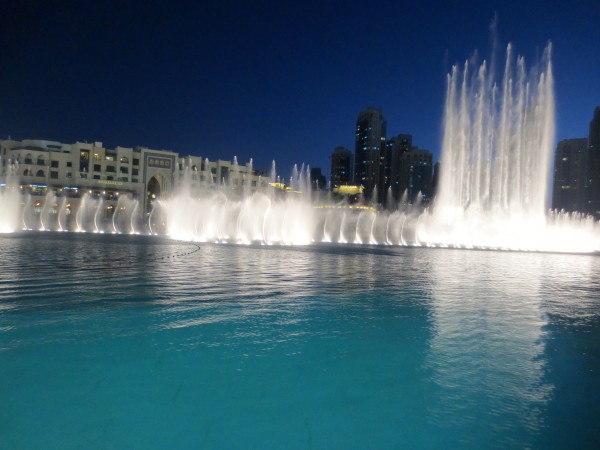 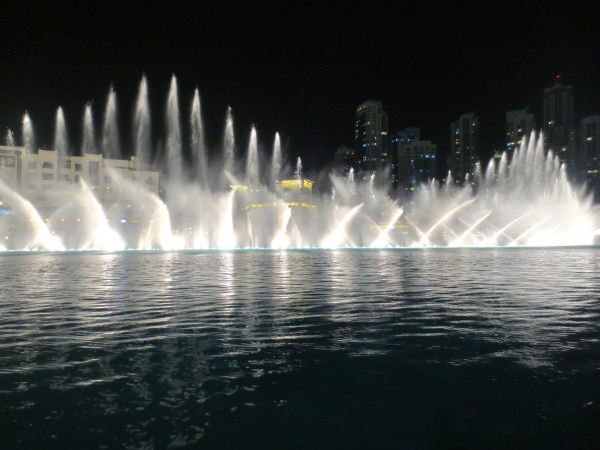 We also noticed the Burj Khalif looks different during the day than it does at night.  At night it almost has an artificial look to it – like the building was made from a cardboard cut-out that could be tipped over. 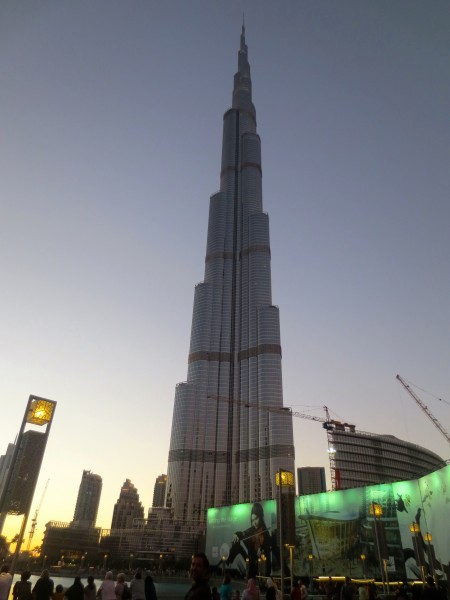 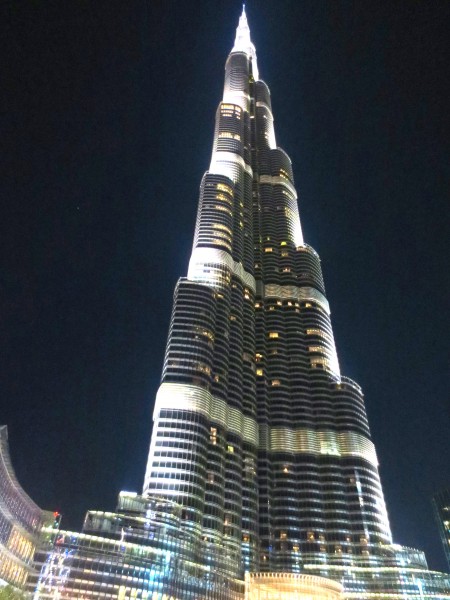 After the water shows we called it a night and relaxed back at our hotel in anticipation of another day in Dubai.

The next day we hopped on the worlds longest metro (the theme continues) and checked out another mall that once carried the crown as biggest in the world,  Mall of Emirates.  The main draw of this mall is one of world’s largest indoor ski resort. We were interested in checking it out and potentially even skiing.  In the end we decided against it mainly because neither one of us had the right clothes – we were chasing summer after all.  We did grab some food at a restaurant located directly in front of one of the slopes so we could feel like we were at a ski resort watching everyone charging the hill. Or something like that. 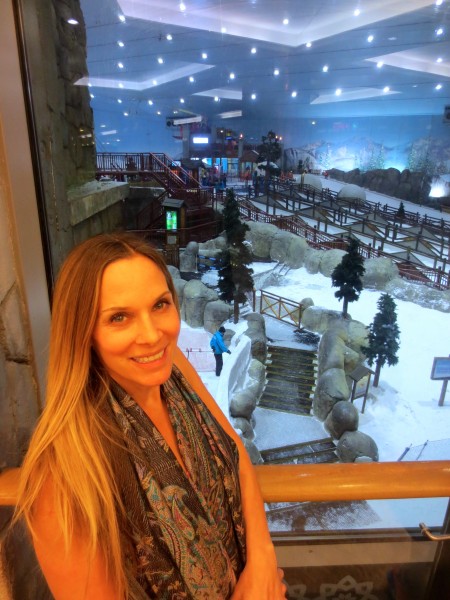 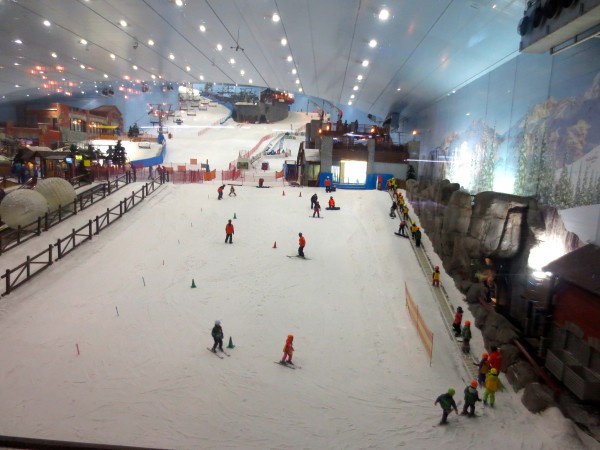 That night we decided we wanted to check out a movie since we hadn’t seen any since we left the States.  We found Interstellar was playing at Ibn Battuta Mall.  That was three malls in two days which was some sort of superlative record for Peter (to keep with the motto of superlatives).   Ibn Battuta Mall has it’s own feel with six themed zones.  The mall is named after and Arabic explorer who themed the mall after the places he travelled including Egypt, China, Indian, and Persia making this mall spectacularly decorated and spectacularly gaudy.  The movie theater was located in the Chinese wing. We both really enjoyed the movie and debriefing afterwords on some of the movie’s plot-lines and suggestions. 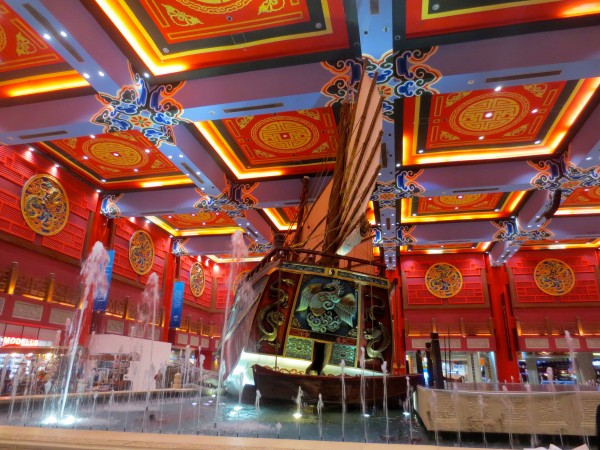 I have never been to a movie theater with better decor in my life.

When our trip was all said and done I wondered if I had missed something.  So many people talk about Dubai with passionate desires in wanting to visit.   To me, to be blunt, it seemed soulless.   A desert land with barely any culture that was nothing more than sand-dunes 40 years ago that is now striving to be the biggest, largest, and tallest of everything.  A bit of a superficial concept.  Dubai is referred to as the Middle Eastern Las Vegas but without the drinking and gambling.  Not to say there aren’t things that Dubai has to offer.  There are tons of luxury hotels, the largest concentration of five star restaurants in the world, an insane amount of shopping, and great weather for escaping winters.   It just wasn’t a place where I felt much of a vibe or a pulse or even an energy.  Its just so manufactured.   Most, if not all,  the people you encounter in Dubai from the hotel staff to the taxi drivers to every single sales agent working in the mall are either Filipinos, Indians or Kenyans.  Again hard to get a feel for the culture when no one seems to be from the city.

I asked Peter if I missed anything when recounting our itinerary to which he replied, “absolutely not, but whoever is marketing Dubai for tourism is doing an exceptional job in wrongly convincing the world there’s something significant to see.”

Our next Middle Eastern adventure brought us to the Sultanate of Oman.

Thanks for touring the land of malls and skyscrapers with us. 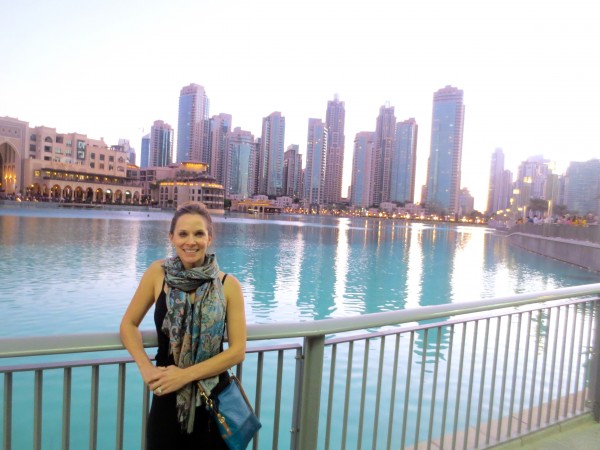