Cashing in Miles on Etihad Airlines

After our 3 weeks in the states we were heading back out on our world tour.  This time to India! I was so excited! India was a place I had dreamt about going for a variety of reason: the food, the deeply spiritual culture, the beautiful madness.  I wanted to get lost in all of it.  Peter on the other hand was a bit weary about returning to India after he and Andrew’s challenging couple months backpacking trip around the country.  He had actually sworn he would never go back.  Nevertheless, he married me and so compromised.  I couldn’t wait!

Peter and I had a long journey ahead of us to India.  From LAX to Abu Dhabi it was a 17 hour flight.  From Abu Dhabi to New Delhi it was 3.5 hour flight.  Once we landed we had a 3.5 hour car ride to Agra where we were staying at The Oberoi Amarvilas near the Taj Mahal.  Peter felt now was a good time to cash in on some miles to get the most bang for our built up mileage bank.  We were both really looking forward to this plane ride.  I had some of my friends ask me if this plane was the one from the from Sex and the City Movie.  The plane from Sex and the City is an Emirates plane and the airline we took was Etihad which is actually suppose to be better.  Peter and I did fly the “Sex and the City” plane a couple years ago and you know what? Both are absolutely fantastic.  You cannot go wrong.

One thing that Etihad does offer to their first class passengers is a chauffeur service.  Peter and I had stayed overnight at his parents house in Brea so about 4 hours before our flight this car showed up to whisk us away to LAX.  Beautiful Mercedes stocked with cold water bottles, cool towels, and wifi. 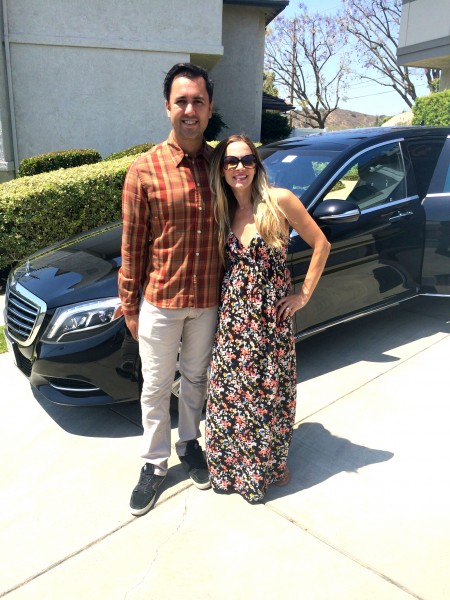 We enjoyed a relaxed ride to the airport.  I concentrated on setting up my new kindle and downloaded some books by the Dalai Lama.  We were going to India after all.  Peter enjoyed the complimentary newspaper. 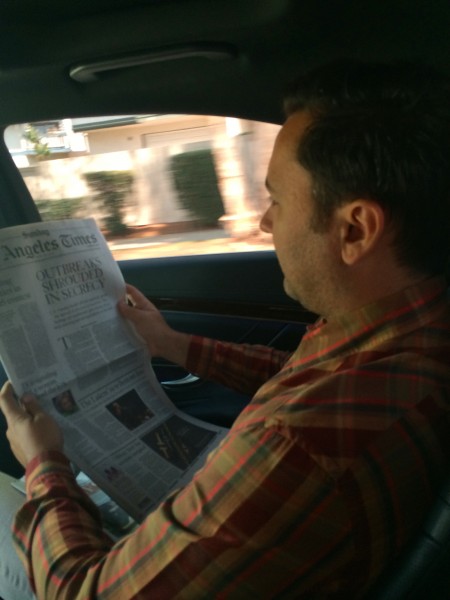 I had our driver snap a shot of us doing our traditional pose in front of the international terminal. 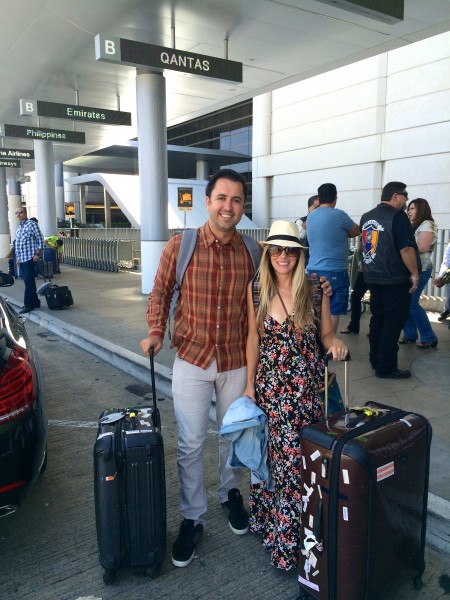 Since the chauffeur is responsible for getting us to the airport on time we were quite early. About 3 hours, but we were happy about that.  The newly remodeled International Terminal at LAX is so nicely done and we had access to the first class lounge.  Along the way to Peter’s dismay I of course snapped photos.  What can I say? This was exciting!  I tried to act like I belonged, but then I gave up.  Here is a shot of Peter checking us in.  I think he gave me the stink eye after this one. 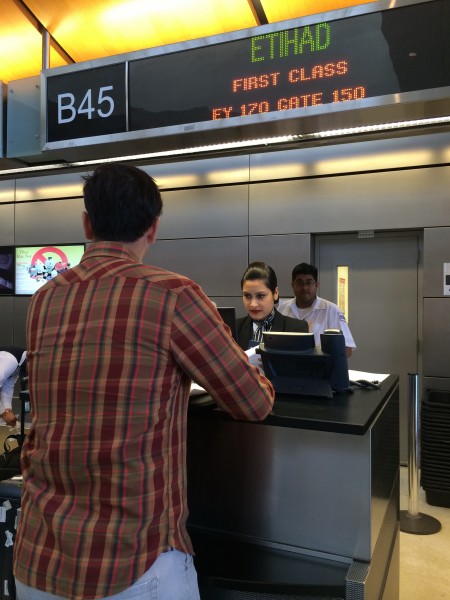 The first class lounge was a little intimidating because it was small, quiet, and full of older men who looked like this was their home.  Their appearance and self assured demeanor intimidated me so much that I didn’t even take out my camera for fear of looking ridiculous.  Instead I sat awaiting the arrival of Beyonce even though I assume she only flies private.

There is also a separate business class lounge attached to the first class lounge.  The difference between the two is that first class is more secluded, smaller, quieter, has less people, and offers a menu to order from.  Peter and I ordered up lunch.  I had a delicious avocado grapefruit quinoa salad while Peter opted for the pizza.  After we enjoyed our lunch we took a seat at some lounge chairs where I blogged and Peter worked till boarding. 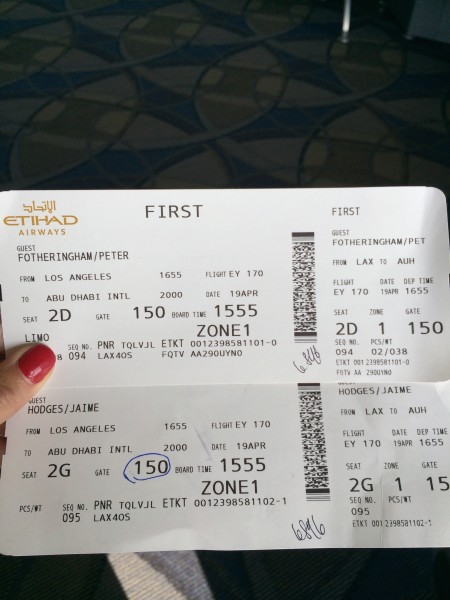 We boarded and were greeted by an incredibly friendly staff.  We were immediately served champagne before take off. 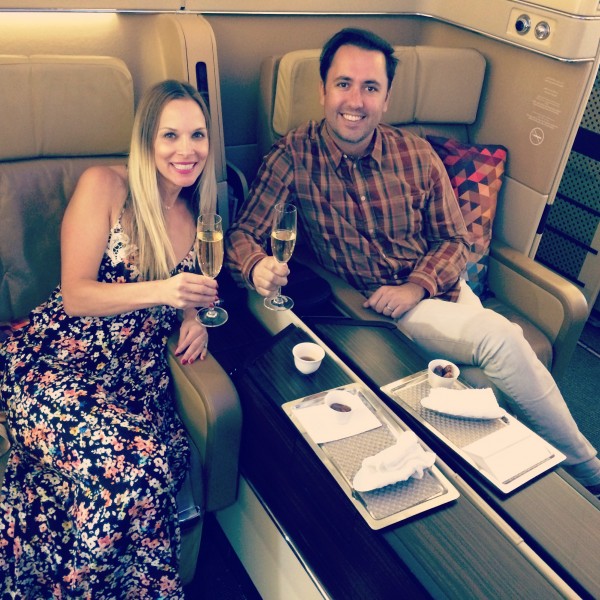 Here is a shot of our seats from above.  A cool feature of these seats is that the side doors close allowing for privacy. 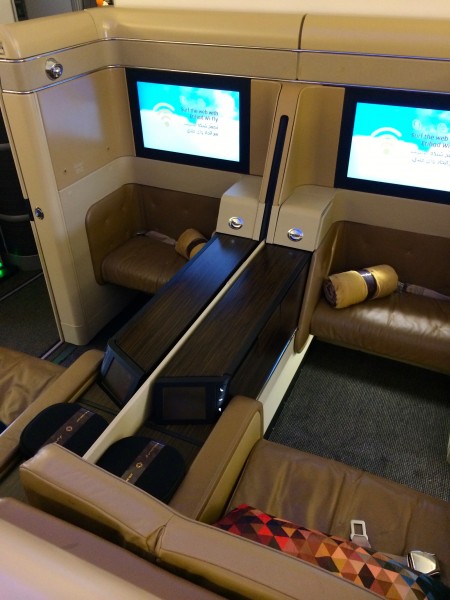 Jeff, our on board chef also came over before take off to introduce himself and go over the menu.  He explained the different options but also assured us he could customize something for us if we wanted.  The menu ranged from beef, chicken, fish, or veggie options.  We could pick a starter, a side, main, and a sauce.  We were also provided a wine list that contained wines from all over the world.  Peter and I both opted to enjoy a cab blend from Bordeaux with our meal.  Peter picked the beef tenderloin with bearnaise sauce while I chose sea bass with veggies.  I asked for fruit for dessert to which Jeff responded, “how about mango mousse instead?” How could I argue that?

The following pictures are as follows: tuna tar tar starter, my sea bass, Peter’s tenderloin, and finally my mango mousse. 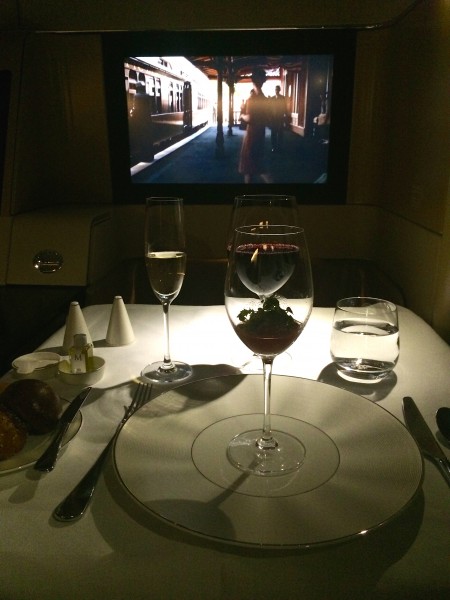 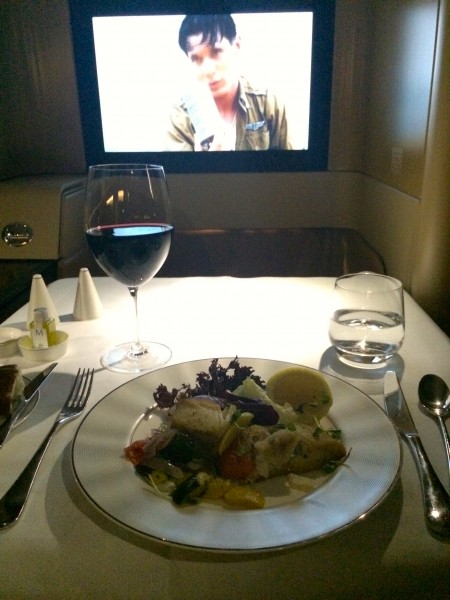 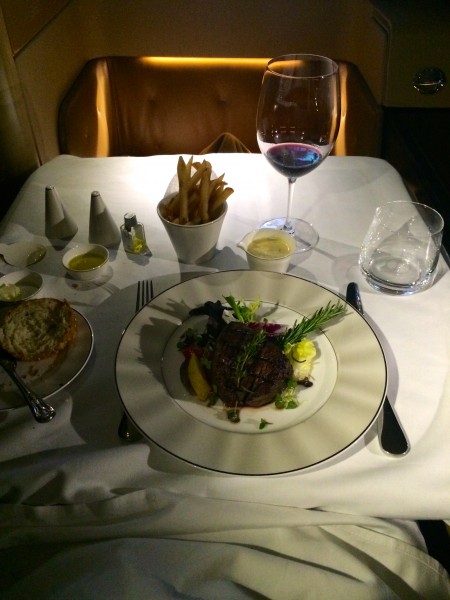 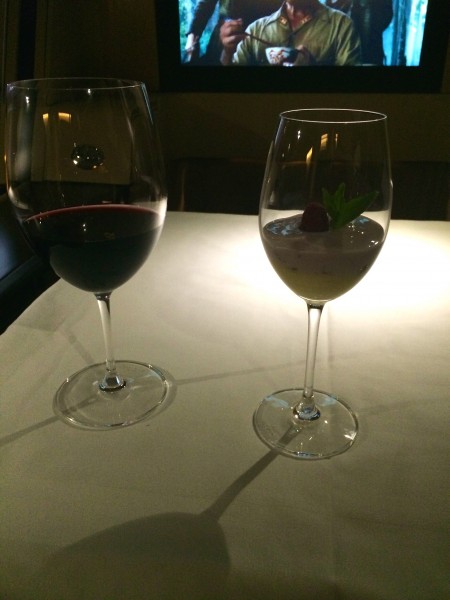 If your glass was ever close to being empty one of the staff would come by and do this. 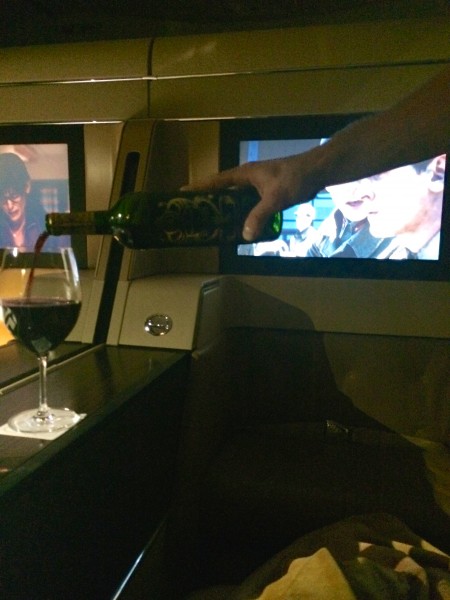 There were all kinds of inflight entertainment.  Music, games, TV shows, and new releases.  Peter and I watched a ton of movies and barely spoke to each other.  We were both basically in our own little worlds of food, drink, and blockbuster hits.

We did manage to get some good sleep.  It’s hard not to when the airline provides you with PJ’s, toiletry kit, and they make up a bed for you in your seat that folds out into a bed.  Here we are in our matching sleep wear. 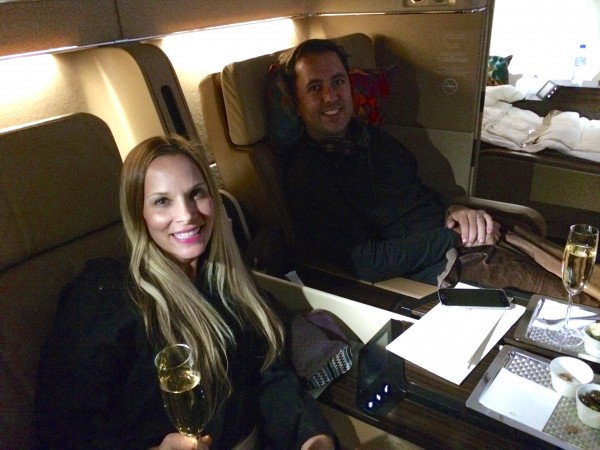 In the morning we were given a breakfast menu to choose from a nice variety.  In reality the trip was over before we knew it.  I was beyond grateful to have had this opportunity and to make such a long flight become seemingly short due to impeccable service and a cozy bed.  A hotel in the sky.

However we weren’t quite done.  We landed in Abu Dhabi and we were late getting in.  All of a sudden before we were even in India, the feelings of intensity began.  We walked up to the transfer line and something smelled bad.  I mean real bad.  Like someone had gone #2 in their pants.  Then the lady behind the counter told us we needed to run to our gate.  We sprinted past groups of Indian men in line for security without taking our shoes off or showing our ticket and ID.  I asked Peter what he was doing to which he replied under his breath, “you just need to look like you know what you are doing.”  Well it worked and we got to our gate in plenty if time.  Peter had learned a thing or two from his prior trip to India.

We boarded our flight relieved that we made it to the gate on time.

We had just woken up on our previous flight and had breakfast and now we were boarding this flight as a red eye so we were both really confused and didn’t know if breakfast or dinner sounded good.  They gave us a glass of rose and told us to “think it over.”  Decisions, decisions. 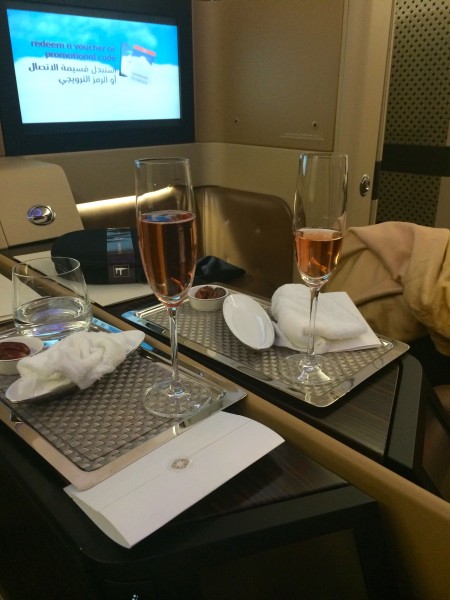 Again we were given a set of Pj’s and toiletries which we immediately changed into.  Why wouldn’t you? We settled on ordering dinner even though it was about 10 am in California.  It’s best to try an acclimate to where you are heading.  We watched some TV, slept, and suddenly we were landing.

It was about 3:30 am when we arrived to the airport and everything was fairly quiet, probably due to arriving in the middle of the night.  Peter and I got through customs without a hitch.   All was good until we got outside and our driver was nowhere to be found.  Due to it being about 4 in the morning no one was picking up when Peter attempted to call.  Peter had found Pawan, the driving company on TripAdvisor and they were #1 so we felt like this was a safe bet.  Due to the drive being over 3 hours we wanted to hire someone rather than take a taxi that entire way.  After nearly an hour and a half of waiting we started negotiating with a taxi driver.  Just when Peter was going to pay him he tried one last time.  This time the owner picked up.  He was terribly sorry and had been confused about the date.  He assured us a driver would be there no longer than 40 min.  He made good on this promise and our driver appeared 35 minutes later.

Off we went from New Delhi to Agra.  We arrived at our hotel, The Oberoi Amarvilas 30 hours after we left Peter’s parents house.  We were jet lagged, out of it, but that seemed to dissipate after we saw the view from our room.  Hello Taj Mahal. 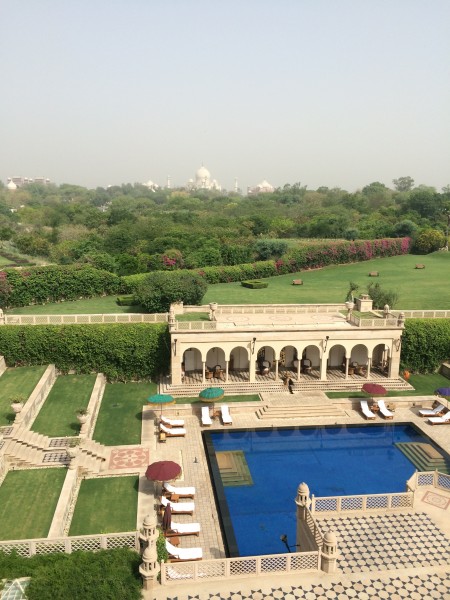 Thanks for following.  I’m excited to see what India is going to bring us. 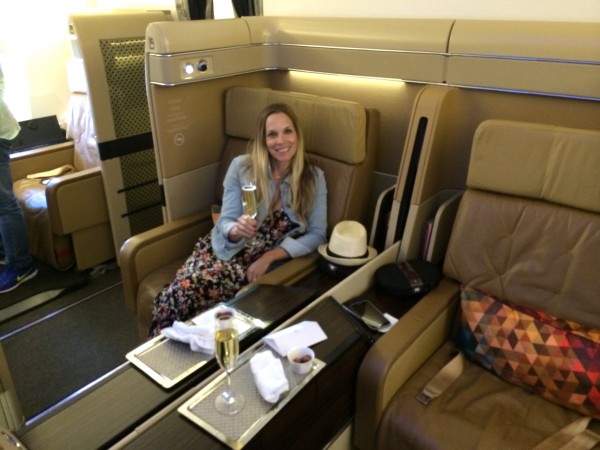