Our next stop was the capital of Hungary. Budapest.

Budapest was ranked #3 in a survey of world’s best cities by Conde Nast – the magazine gives credit to the legendary cafes, bars and spa culture.  That’s great and all, but for me I was excited to be having three friends visit us.  Slumber party, girl talk, and wine drinking in Hungary.  Poor Peter.

My friend Alex, who was a bridesmaid of mine, Lauren another long time close friend, and Alex’s friend Raychel were coming to stay with us for a few days.  A friend of Lauren’s had told her of a dirt cheap ticket from New York-Milan-Prague-Paris-Bangkok for a couple hundred bucks through Priceline. A lot of people jumped on the opportunity and it was dubbed “glitch trip” by the online community. Lauren told Alex. Alex told Rachel. Alex asked if Peter and I could meet them in Budapest and the rest is history. The five of us would meet in Budapest.

I had researched online and had found the perfect AirBnB for our crew based on the neighborhood Peter thought was the best from his previous time in Budapest.  In fact this was one of my favorite AirBnB’s we stayed at in 2014.  Great decor, spacious, good feel, and a perfect walkable location. 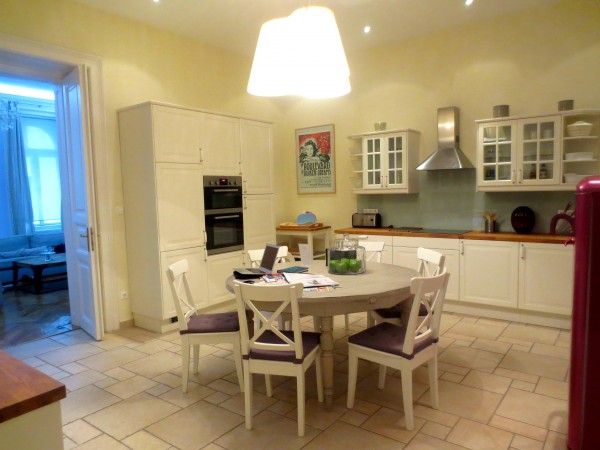 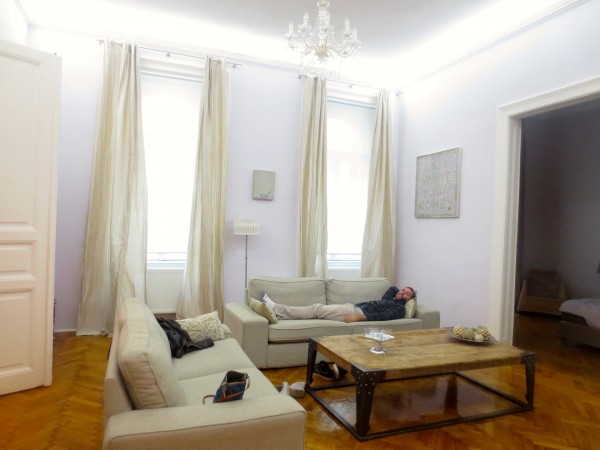 One of my favorite things to do in California is to host friends.  I love to make a comfortable environment with music, food, cheese and drinks.  I feel like I’m in my element when I have friends and family over.  Since I hadn’t had a chance to do this in months, I decided to put together a little treat for the girls.  Peter and I arrived the day before the girls so when the they got to our place I had wine, turkish delights, and scarfs from the Grand Bazaar in Istanbul set out. 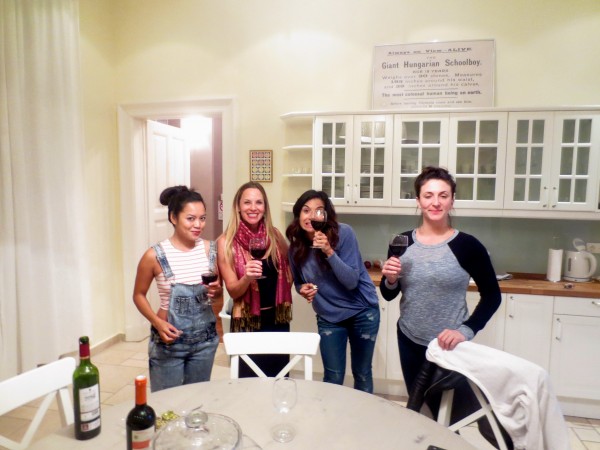 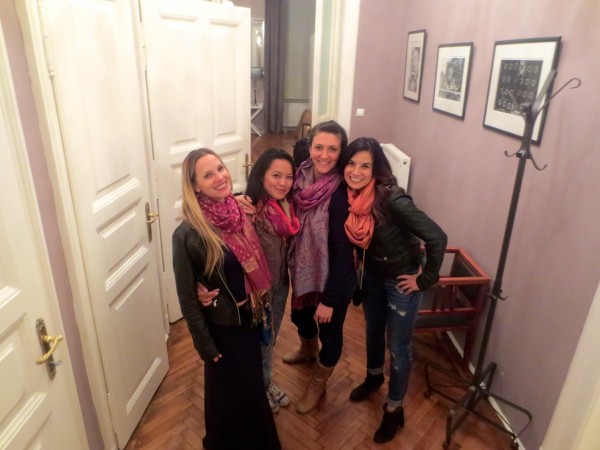 Peter had been to Budapest before so was able to make suggestions in terms of places to go and avoid. The first night we selected a fun dinner spot that was an easy walk from our flat which goes by the name of Menza.  It’s known for it’s lively atmosphere and authentic Hungarian cuisine: goulash, beetroot risotto, roast beef, etc.  Peter made a good call choosing this place.  We all really enjoyed the food and the vibe.

After dinner we wanted to go check out one of the famous “ruin pubs” of Budapest.  About 15 years ago the ruin pub concept was created. In the beginning, pop-up bars would open in abandoned buildings (hence the name ruin bars) in the Jewish Quarter where youth could drink on the cheap.   Now its become somewhat of a phenomena and fad in which these pubs host live bands, eclectic decor, and stay open late, not necessarily in abandoned buildings.  We went to the oldest and first ruin pub that night, Szimpla Kert.  The bar did not disappoint.  Graffiti walls, a bath tub you can sit in and sip your beer, endless nooks and crannies to explore in the numerous different rooms, all with different themes. They even had hookah, but after Turkey our lungs needed the break.  We all could certainly see why Budapest is known for having the best bars in the world.

The next morning the girls and I did a self taught aerobics/yoga class in the living room.  Peter hid in our room and worked. 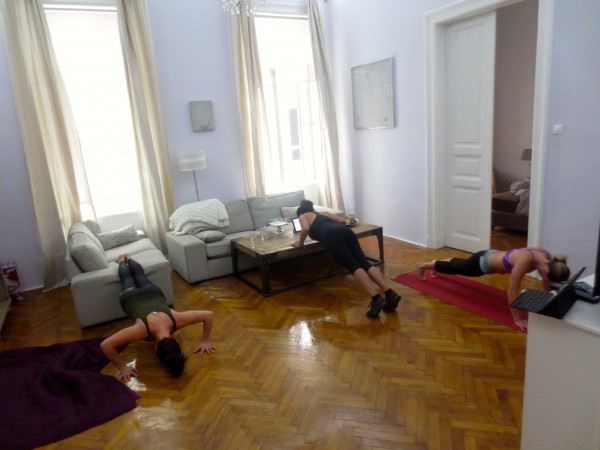 After a leisurely morning the four of us sent out to grab some food and then take the metro to a Turkish bath house.

Just around the corner from our flat was a cafe, Bistro Suppe where we all tried delicious soups and breads.  The weather was a bit chilly in Budapest so this was a perfect afternoon snack.

We grabbed the metro and headed to the well known Szechenyi Bath House.  Built in 1913, it is the biggest bath house in Europe and resembles a palace from the outside.  Thermal pools ranging in temperatures take over the outside grounds.  Inside the palace walls are a variety of steam rooms of varying degrees of temperature (hot to really, really hot) as well as dunk pools (cold to really, really cold) with various salinity.   The four of us girls all went into one of the hottest rooms to start with.  We could barely breath.  Much of the clientele were older Hungarian men that appeared relaxed as could be.  Nonetheless, it really was great fun to go into the hot rooms, see how long we could last then dip in freezing cold water.  Its a medicinal bathhouse and this was what we were told to do to get the most benefits – shock the body with extremes, hot to cold.  We ended the day soaking in the thermal baths outside before changing and headed back to our flat.  We all left feeling great, buttery and really relaxed. 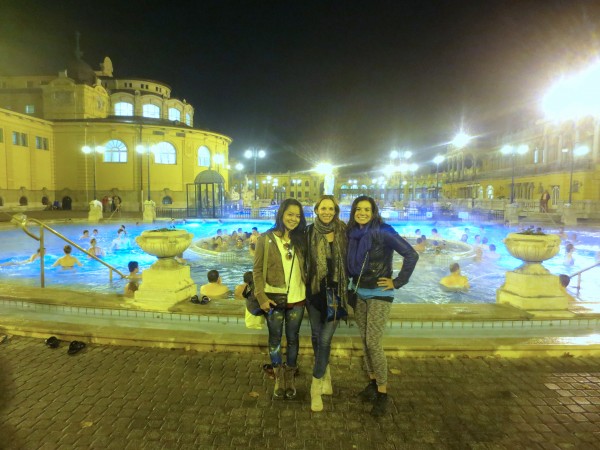 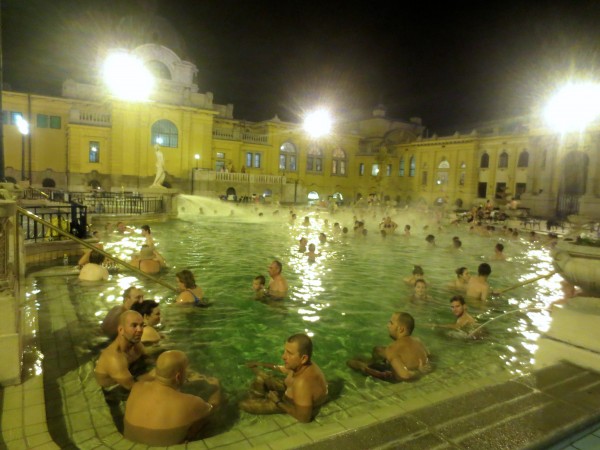 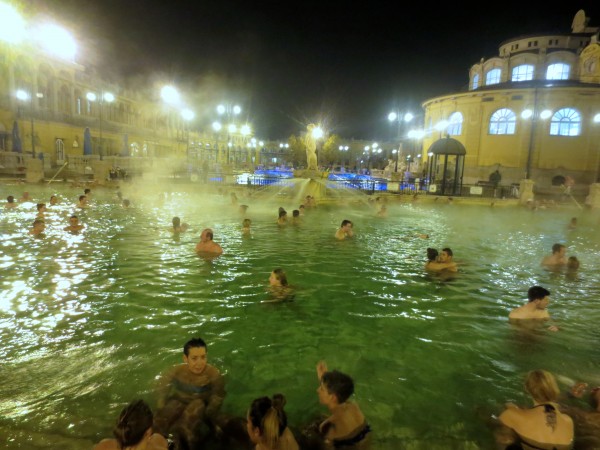 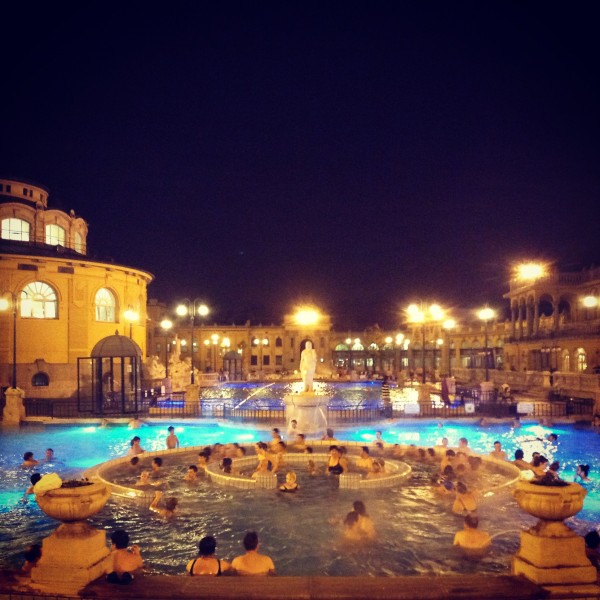 We hopped on the metro back to our flat while discovering monuments along the way to take pictures with. 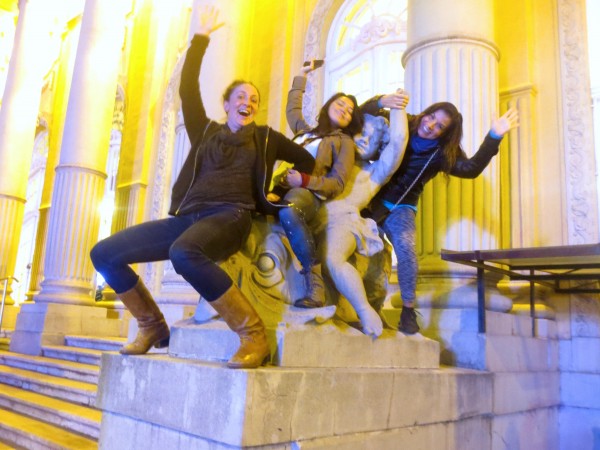 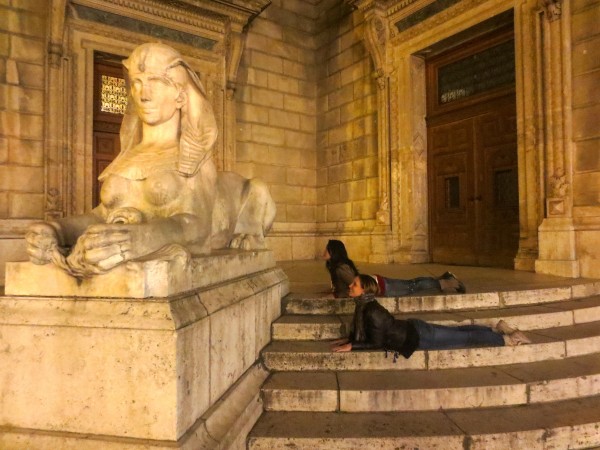 We decided that this would be our night to go for it.  Put on some make up, do our hair, and check out one or more of the famous ruin clubs. 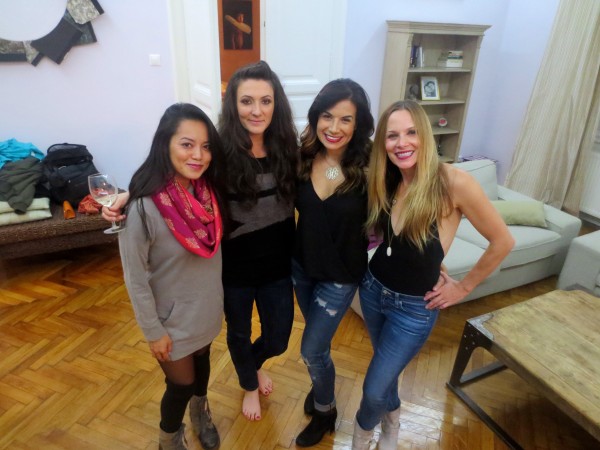 First we grabbed another solid meal in a trendy neighborhood that Peter had found at a bistro-pub called Spiler.  The guy sitting next to us told Alex that she looked like the mural on the wall so after rolling our eyes at his ignorance we of course humored the situation by taking a lot of pictures of Alex and her doppelganger.

After dinner we were ready to hit the club.  Well kinda.  The problem is that none of us are club-goers, but we all wanted to experience Budapest’s late night party life at a ruin club.  We went to a ruin club called Instant which is a pretty unexplainable place to be. It boasts 26 rooms, 7 bars, 2 gardens and 7 stages – all in one location.  It’s a huge complex mirroring an adult Alice in Wonderland.  A maze of eclectic decor that will keep your eyes busy with wonderment. Name a genre of music and you could find it in one of the rooms. There were also rooms where people would be chilling playing Connect 4 and then you’d turn a corner and find people dancing spastically to EDM.  We found a room that was just right, the Hip-Hop room, and mainly danced in our own circle while simultaneously making up dance moves on the fly. Pretty sure we were an odd spectacle. We’re not club-goers. 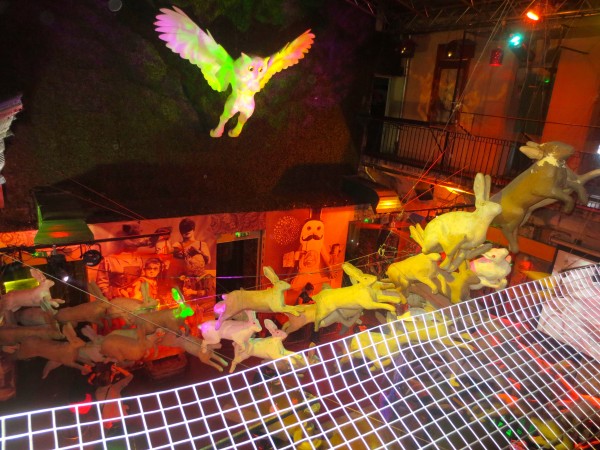 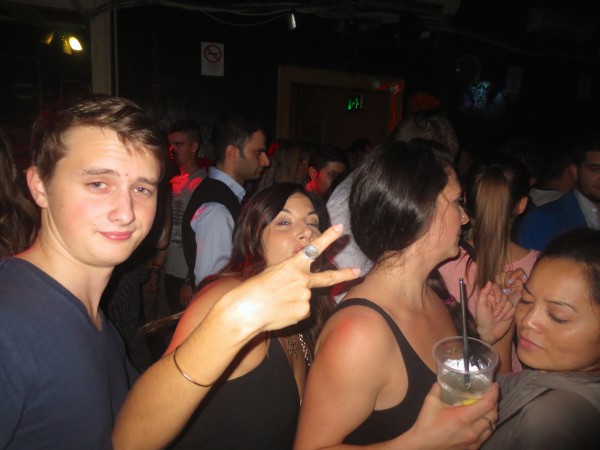 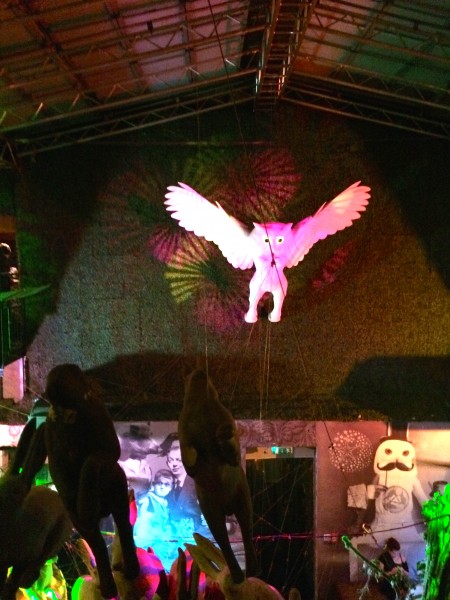 After a couple hours we were spent and started our walk home, just when things were really starting to pick up.  We left around 1am and the place was wall to wall people with a line out the door.  Hungarians like to party and they start late.

The next day the girls went off to do some sightseeing while Peter and I went to visit my Aunt Morrie and Uncle Allen.  Just by coincidence they happened to be in Budapest the same time as us.  My Aunt and I had been emailing one day and she mentioned she was going to Budapest for the first time.  A couple of emails back and forth and we realized we would be there on the exact same dates.  Turns out we were only about a 5 minute walk to the hotel they were staying at, The Four Seasons.  Really a wonderful coincidence.

We joined them for coffee, dessert, and a really wonderful catch up session.  They had both been at our wedding so it was especially fun to recap with them.  We didn’t get to do a lot of wedding recapping with anyone, other than the four hour long conversation I had with my mom on the phone, because we left the country shortly after our wedding.  It was really great and always good to see family, especially when you are so far from family. 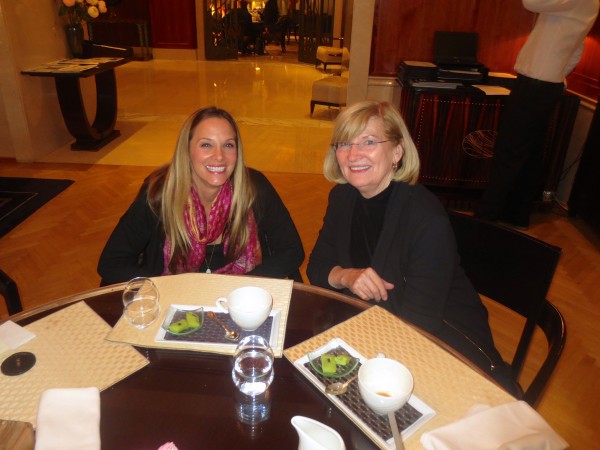 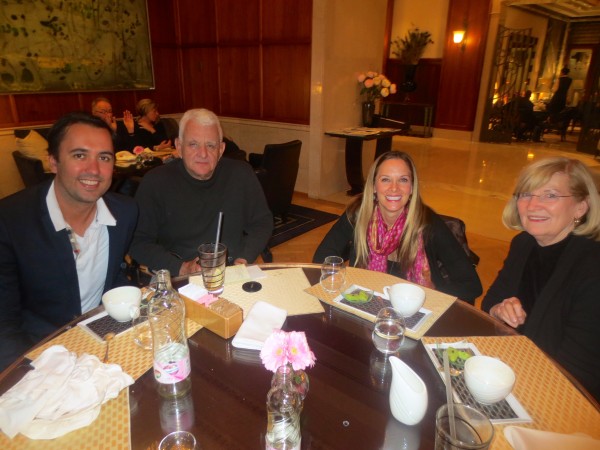 Afterwords, we headed back to our place to meet up with the girls for our last evening together.  All of us headed out for one final dinner event.  Another home-run of a meal, with great and great friends. 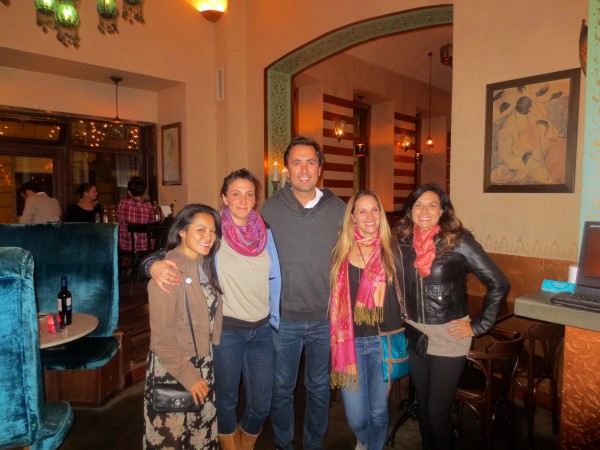 After dinner we headed home where an impromptu yoga session started.  Peter immediately took this as his cue to go to bed. 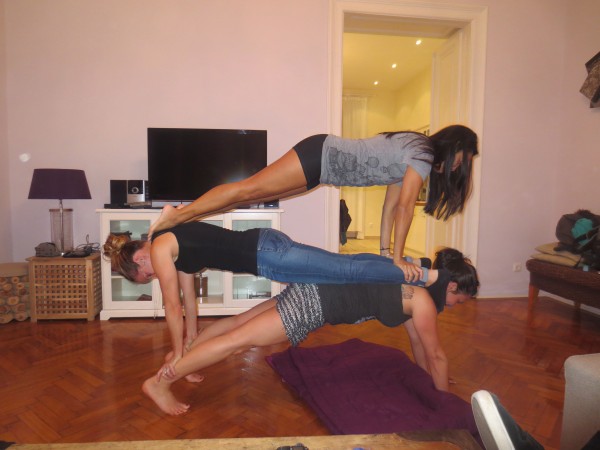 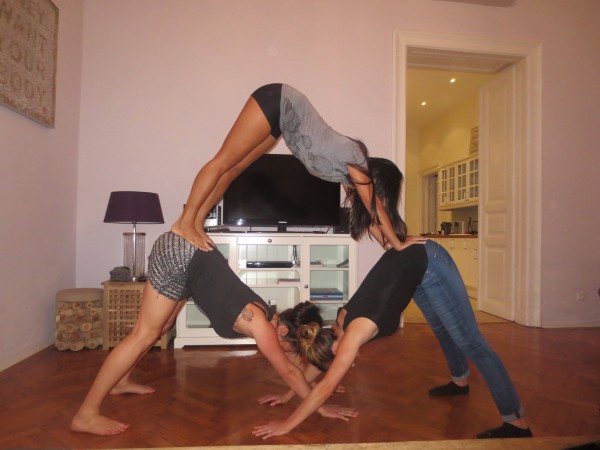 The next morning we said our good byes to the girls.

Although it wasn’t good bye for long.  Raychel and Alex were going to be traveling for a few months and were going to be in Thailand in January.  One night while we were chatting about New Years plans Peter and I told them that we would be in Bangkok and they should join us.  They were both enthusiastically on board and Alex invited her boyfriend Clint to fly out from California as well.  Add on to that our friend, Andrew, would also be in Bangkok. We had a full group of friends to ring in the New Year in Bangkok all being planned in Budapest.

Budapest was a bit of a different trip for me.  I focused more on hanging out with friends and family rather than taking in and seeing all the sites of the city.  I was happy to do this this since over the months I had been disconnected from family and friends, except of course Peter.  Budapest will be there and I can take a boat cruise on the Danube River next time, but the uniqueness of having friends and family in Budapest was a once-in-a-lifetime.

Thanks for partying with us in Budapest.  See you in Dubai. 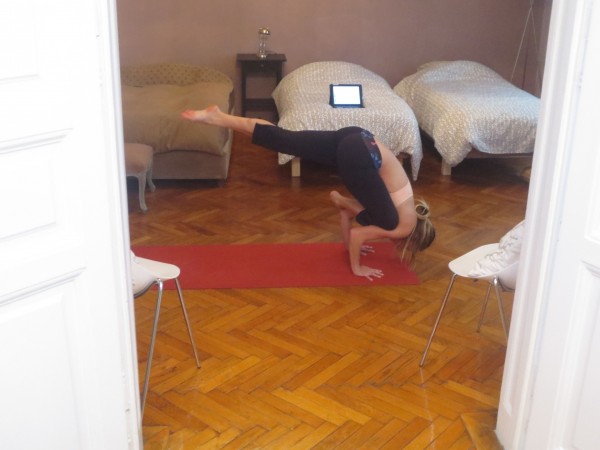