Boxing and Cooking in Phuket

We had a few things to check off with Chris and Jen on our journey through Thailand.

The last thing we needed to check off was “Island life in the Andaman Sea.”

This is why Thailand is a perfect vacation destination; it offers so much diversity of experiences, landscape, sensations all while offering up delicious Thai food everywhere you go.

We took a short flight from Chiang Mai to Phuket on Air Asia. The airline boasts the tagline, “Fly with the World’s Best Low-Cost Carrier Today.”  Chris mentioned this provided him with some mixed emotions.  Fast-forward 6 months and they’ve changed their tagline to a more welcoming, “Now Everyone Can Fly” so Chris was likely in good company with his sentiments towards their messaging. Nonetheless, we made it safely to Phuket.

Phuket was a quick stop for us on the way to the the more remote islands of Thailand.  Phuket is the biggest island in Thailand and hosts an international airport which receives flights from all over the world. For most of Phuket’s history, the development of the island took place on the Southern tip of the island with the airport on the Northern tip. But with so many tourists now flocking to Phuket to escape cold climates (Russians particularly dominate the Phuket landscape) a lot of high-end resorts and neighborhoods are being developed closer to the airport to offer tourists a more convenient choice and to avoid the growing problem of debilitating traffic down South.

Against better judgement we booked a hotel in the South of Phuket. With a flight that arrived at 5pm. On a Friday.

It ended up taking close to 2 hours in traffic to get from the Phuket International Airport to Kata Beach and our hotel, Sugar Marina Nautical Resort.  During our taxi ride I decided to google Phuket facts and fill our crew in on the island we had just arrived to.  For example, did you know 2 bridges connect Phuket to mainland Thailand and that November to February is considered the cool season and when most tourists visit? etc.

During our 2 hour taxi ride we brainstormed the night’s activities and settled on Muay Thai boxing match at Bangla Boxing Stadium. We sprung for ring-side seats.

Muay Thai is a national treasure of Thailand and varies from traditional boxing in that fighters can use eight limbs to fight: fists (2), knees (2), feet (2) and elbows (2). Traditional boxing only allows two (fists). So as you can imagine the range of skills a Muay Thai fighter has is complex and deadly.

In every Muay Thai fight there is a pre-fight ritual called Ram Muay where each fighter pays respect to his trainer, teacher, man and Buddha. This is done by circling the ring three times in methodical movements.  Then the fighters bend down on their knees and do almost a gyration to the music which demonstrates their prowess as a fighter. The ritual takes up to a few minutes to perform against the backdrop of old-school Thai music which is unique in sound with its blend of two oboes, drums and cymbals. The music starts slow during the Ram Muay and then picks up tempo throughout the duration of the fight. Here’s a sample of the music. I found this ritual mesmerizing with the combination of haunting music and graceful movements of the fighters about to go into battle. 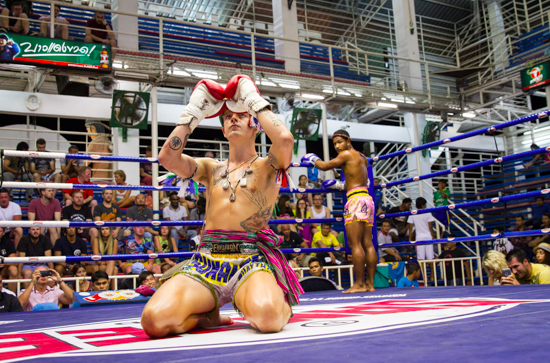 We watched some intense fighters from the ringside.  Some with blood drawn and some with fighters leaving with huge contusions on their bodies.

The following pictures depicts the longest and most grueling fight of the night.  The taller fighter had long legs and he kept kicking his opponent with full force.  Within moments of the kick you could see the area where the kick landed turn to red, swell, and bruise immediately.  Nonetheless the opponent with the covered bruises fought back with tremendous tenacity and won the fight.  I saw him at the end of the night limping out of the arena.  I thought to myself, ‘he isn’t going to be able to walk for weeks.’  What a brutal occupation. 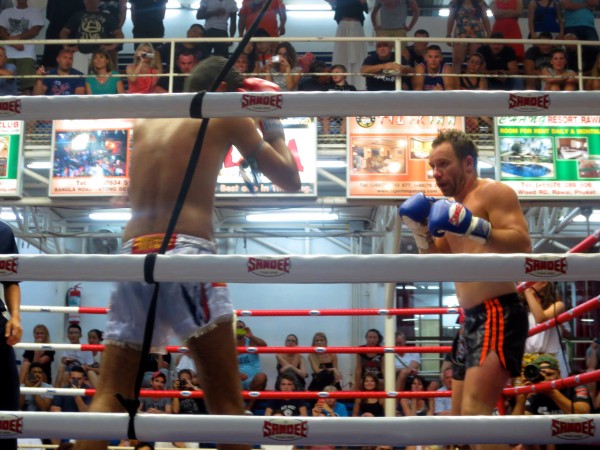 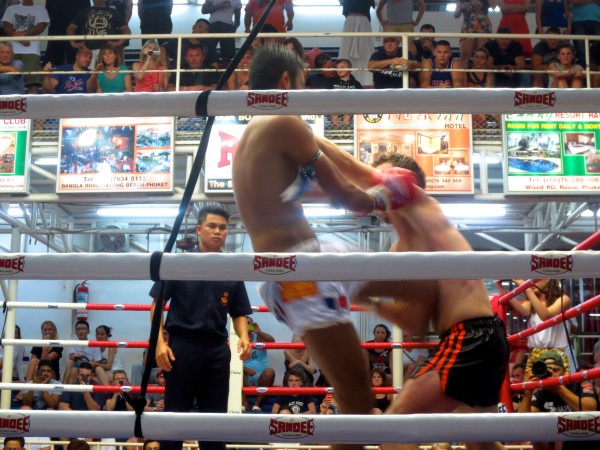 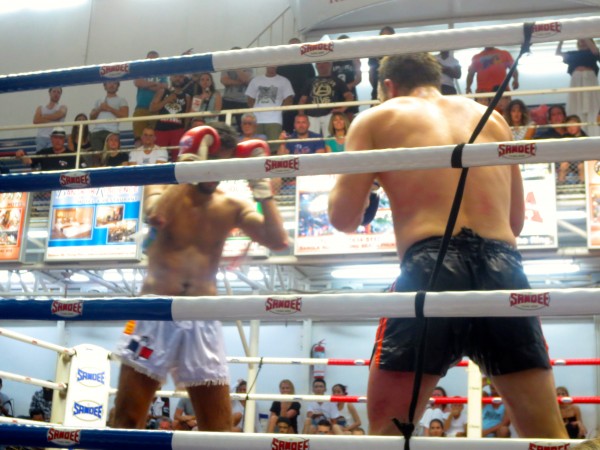 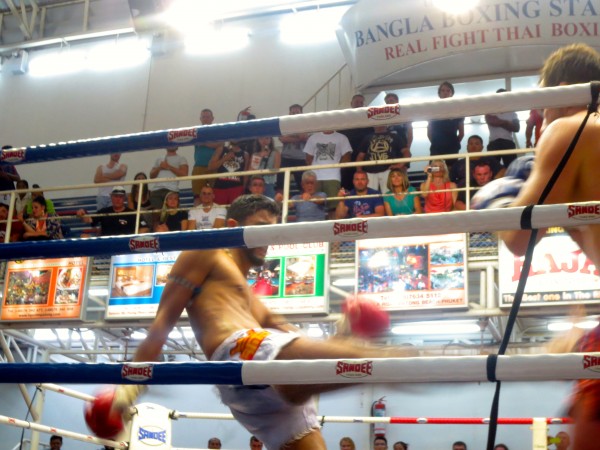 It was surprisingly entertaining given the fact that I have to periodically close my eyes in movies if it gets too violent and I am not a fan of fighting or seeing people get hurt.  It might have been the  pre-rituals, the music, the announcer excitedly speaking in Thai, or because no one seemed irreversibly hurt that it made for an enjoyable evening.  There is an art form to Muay Thai.

It wasn’t too scary for this little fan who was standing and sitting ringside to take in the action while she ate popcorn in her underwear.  WHAT?!  I was alarmed that she appeared to be alone so we waited until her family collected her who were sitting in the rafters. 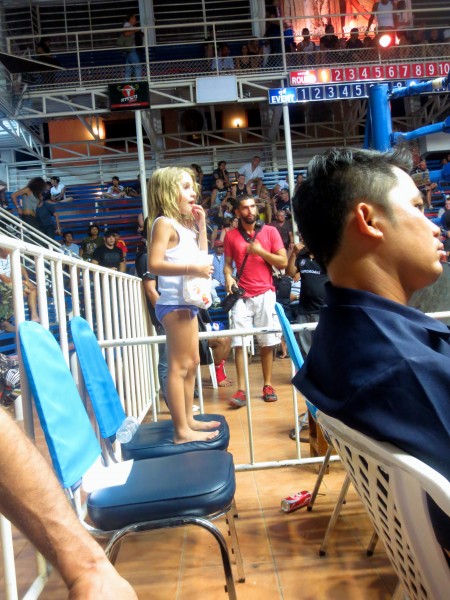 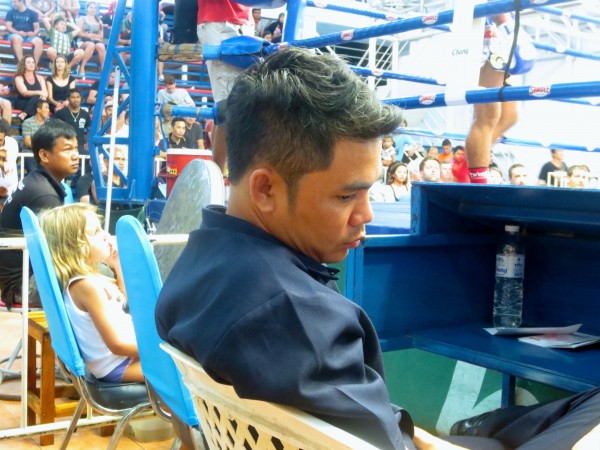 That night we were all a bit beat from our non-stop pace so we took Phuket’s version of a Tuk Tuk (always fun) back to our hotel and called it a night.  I kind of wish I owned that little pink truck. 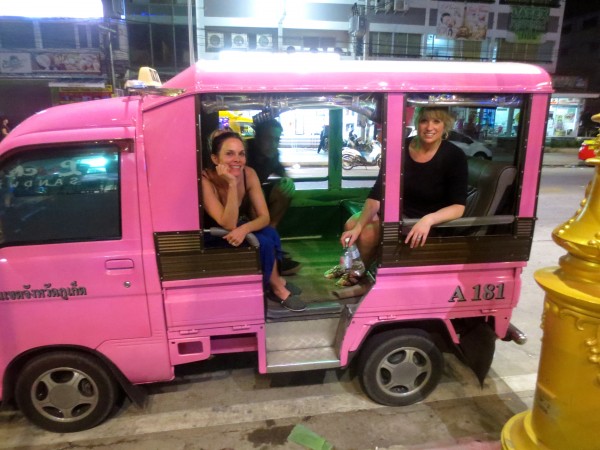 The next morning Jen and I decided to learn more about the delicious, spicy, and heaven-like Thai cuisine by taking a course at Kata Thai Cooking Class.  We learned a lot, but it’s been months since I have been in a kitchen due to our nomadic lifestyle so I fear I won’t remember anything when the time comes that Peter asks me to show-off my Thai cooking skills.  It was an enjoyable course and the food we made was so delicious with more fresh tasting ingredients than you can find in most restaurants.  Half the fun of taking a Thai cooking course is being able to eat what you make.  The menu we followed consisted of green curry and Phad Thai which we both feasted on at the end of class.

What do you think Jen? Can we recreate this meal when I see you in September? 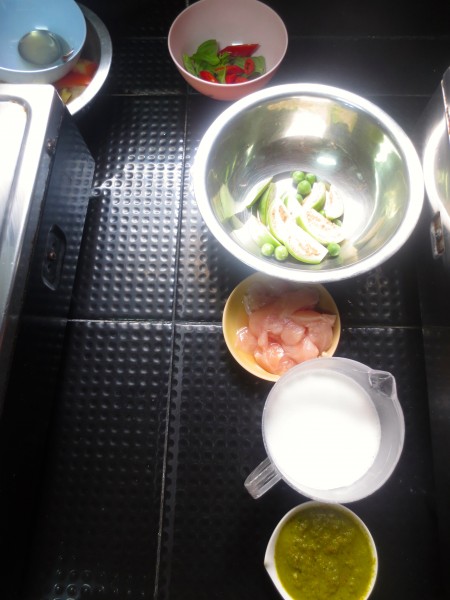 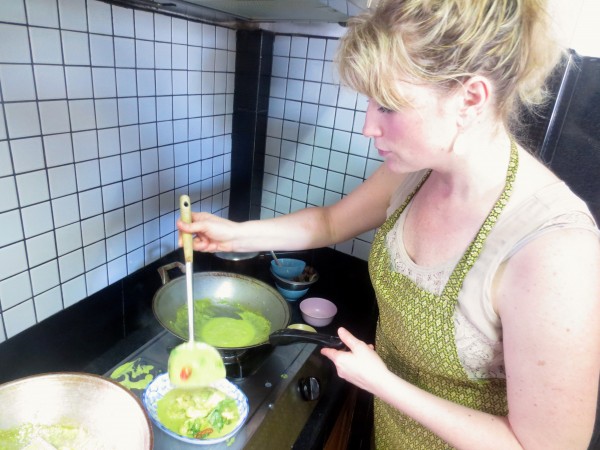 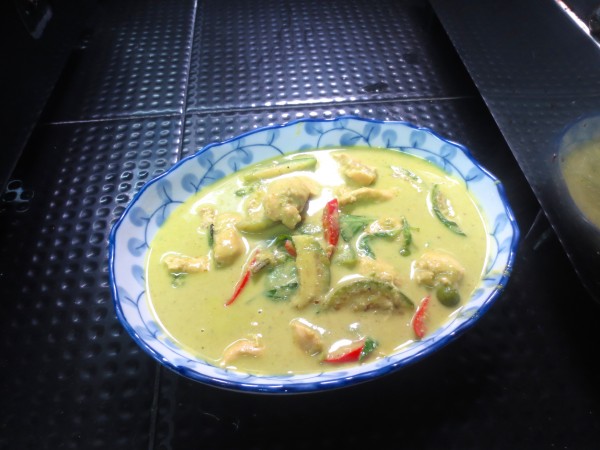 Early evening we regrouped with Chris and Peter and grabbed a cheap massage before sunset.  Peter told us that Chris’s masseuse kept talking about how strong he is, in Thai.  The locals seemed to really have a thing for Chris’s arm muscles.  We tried to prevent this from going to his head.

We timed our massage to end 30 minutes before sunset so we could enjoy the show from Kata Beach with the flocks of Russians wearing questionable swim attire.  We grabbed some beers from a beach cart and strolled over to the sand.  This was our first sunset together while sitting on a Thai beach.  Those island sunsets never disappoint. 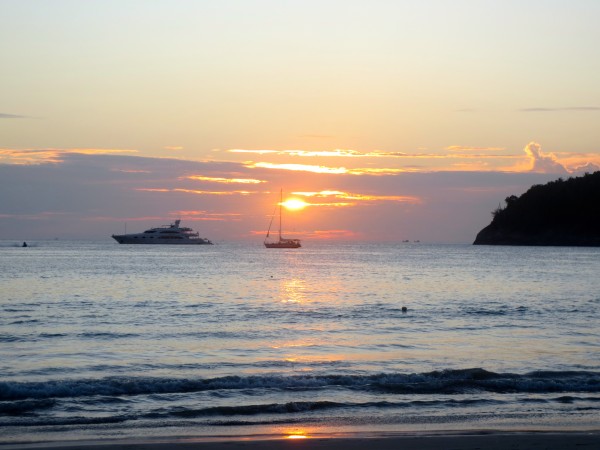 After sunset we enjoyed a nice dinner at Boathouse, a beach side restaurant offering a French and Thai cuisine.  We sat outside on the balcony listening to the waves crash while enjoying a perfectly timed four course dinner.  Peter and Chris went for the French menu which consisted of Foie Gras, mushroom salad, Wagyu beef, and chocolate dessert.  Jen and I opted for the Thai menu which consisted of chicken, grilled tiger prawns in red curry, and deep fried seabass, plus banana fritter with coconut ice-cream.  And now I’m hungry.  Don’t go to the grocery store hungry and don’t blog about food while hungry.

After dinner we took in a bit of the nightlife by wandering around the bars and street markets of Kata Beach.  I was still happy to see all the Christmas decor spotted around Thailand despite it being January. 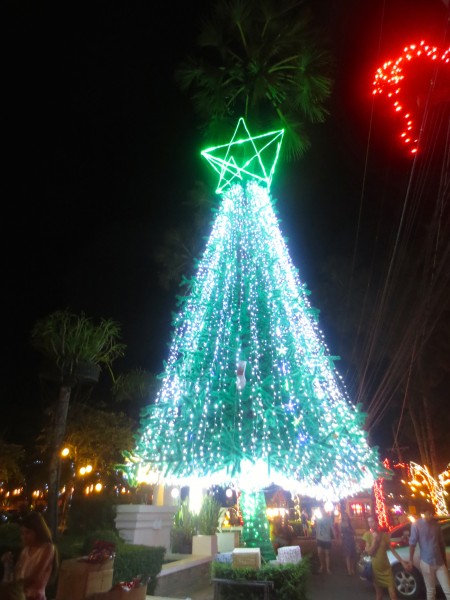 In the morning it was a partial day of travel by way of car and ferry boat.  It was an hour drive to the port where we caught a two hour ferry to Koh Phi Phi island.  Special bonus on this ferry because they served coconuts, had deep-reclining seats, good air conditioning and were playing Avatar which made the two hours go by fairly quickly. 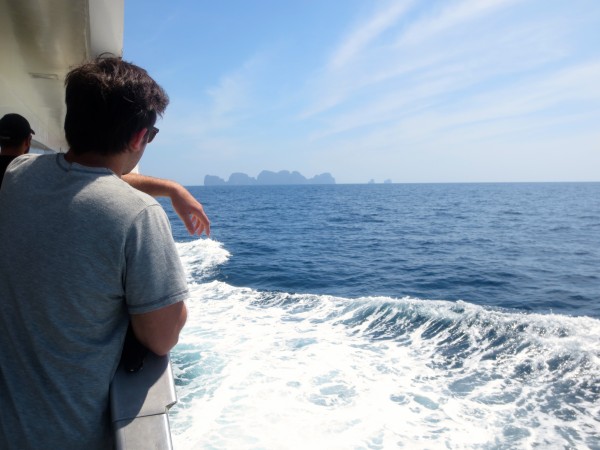 Phuket was a quick couple days until we headed off to more remote islands that Thailand has to offer.

Its incredibly over-populated and over-developed.  There are some real seedy and dirty areas, particularly Soi Bangla in Patong Beach where ping pongs shows are promoted everywhere.  This is contrasted by some really beautiful albeit isolated areas of resorts such as Sri Panwa and Amanpuri where the entire idea is to check-in and stay at the resort and lap in their luxury.

Nonetheless, I’m glad we had a couple nights in Phuket because we came into it with the right expectations and itinerary. We weren’t expecting to be blown away be a calming force of island magic and rustic beach scenery so instead accepted Phuket for what it is and signed up for Muay Thai, cooking courses and massages leaving the quality beach time and scenery thrills for other islands.

Thanks for keeping up with us on our Thailand Adventure. 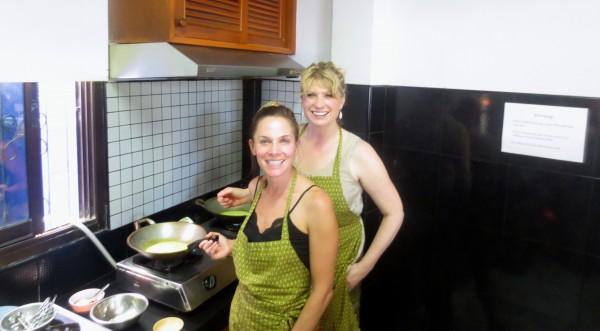